MK Builders, a framing contractor based in Paradise, PA, has switched from using mobile cranes to Potain self-erecting cranes for residential homebuilding operations.

MK Builders has four self-erecting cranes it its fleet: a Potain HDT 80; a Potain Igo T 85 A; and two Potain Igo T130s. It is using them for tasks such as setting floor trusses, wood framing and panelling for residential builds, among other tasks. 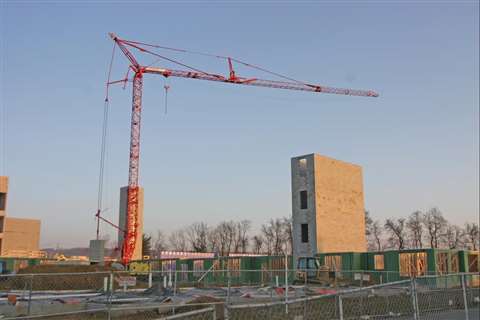 Potain self-erecting cranes are now being used by MK Builders for residential construction work rather than large crawlers.

The company said the switch has resulted in a number of benefits. For example, it says that the self-erectors are easier to transport to the job site and that, once erected, their small footprint enables good access to the rest of the job site. Visibility is better and the cranes can be controlled by remote control, MK Builders continued, while fewer crew are required to operate the crane. The greater reach and radius of the self-erector cranes means that access to all parts of the jobsite is enhanced.

“The fact that you can use the remote control to operate this crane from anywhere on the job site — in the building or on the ground — is the best thing that could have happened for us,” said Jacob King, superintendent at MK Builders. “It’s all about speed and efficiency. We complete jobs quicker with the tower cranes and with less people.”

MK Builders is currently constructing a multi-family housing complex in Malvern, PA, that consists of two, four-story apartment buildings and a one-story clubhouse. The company deployed its Potain HDT 80 and Potain Igo T 85 A cranes for the job. A large pond on one side of the site limited the working space available, making the use of a crawler impossible. However, it was more than enough for the self-erecting cranes to be erected, said Manitowoc – manufacturer of the Potain cranes.

“We chose the HDT 80 and the Igo T 85 A to help build both four-story buildings and the clubhouse because they could reach the height that we needed,” King continued. “Also, with the retention pond being on site, these cranes enable us to reach the other side of the building without having to move the crane. We wouldn’t be able to complete the job as effectively with a mobile crane.”

MK Builders bought the HDT 80 from Stephenson Equipment, a Manitowoc dealer in Pennsylvania, after it had rented it for a while.