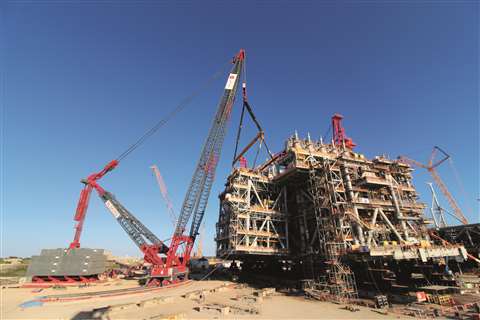 The jobs that these cranes perform are generally at power plants, refineries and stadiums/ball parks. Often it can take as long as a year to dispatch and mobilize such a monster crane to the jobsite. These cranes, although there are just a few, work on jobsites around the world. ACT takes a look at four recent jobs in the U.S. that required the work of a mega crane.

As big as Texas

The most recent lift was a 3,179.5-ton MRU module. The 354,000 ton meters load moment and long outreach of the AL.SK350 enabled the ALE team to lift the second of three modules on top of the offshore topside.

The three modules weigh a combined total up to 7,290 tons (with block and tackle included). The monster crane can lift from one position, which is an ideal solution for working at the congested site. ALE said significant time is saved by not needing to relocate the crane for every lift, as would have been the case with other ring cranes.

The second lift, involving the MRU module, took place in January and weighed a combined total of 3,179.5 tons with block and tackle included. For this, the installation outreach ranged from 103 feet to 98 feet. 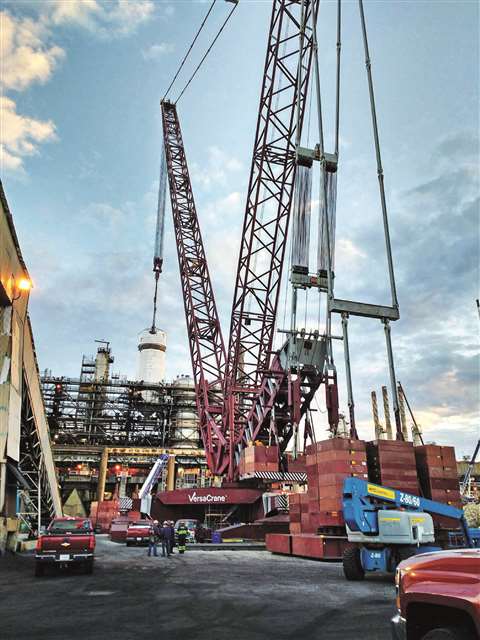 “The second successful lift proves the tried-and-tested capabilities of the AL.SK350 crane and its unique ability to lift this weight at such a long outreach within a congested site. The team and myself are very proud to be involved in such a landmark project and be the first to achieve such a heavy lift using this type of crane in the U.S.A.,” said Ronnie Adams, senior project manager.

To avoid delays to the overall offshore topside, these lifts will act as a trial to ensure they fit and the topside is pre-commissioned when installed with a new heavy lift vessel off the coast of Israel. The final of the three modules is expected to be lifted in February, with the removal of the three modules in the second quarter of 2019.

Deep South Crane & Rigging recently completed the removal and replacement of six 550,000-pound coke drums and derricks at a crude processing refinery in Illinois. An existing sump in the area of the crane pad complicated the placement of a heavy lift crane.

To meet these requirements and ensure a smooth project, Deep South worked with the owner and general contractor for a year to design lift plans and placement of the heavy lift crane and temporary staging piers.

“The VersaCrane line’s pedestal design and auxiliary counterweight system had a perfect footprint, allowing us flexibility in placing the crane while maintaining the crane capacity needed for the size and weight of the derricks and drums,” said Jimmy Gore, project manager with Deep South. “And it lowered costs since we eliminated the need to fill the sump.”

Using a 2,500-ton capacity VersaCrane TC-36000 at a 239-foot radius and a 660-ton Liebherr LR-1600 tail crane, Deep South began by removing a 636,000-pound 4-drum derrick structure, resting it on piers for staging. The derrick structure was 112-feet long, 25-feet wide, and 110-feet tall. The client was able to modify the derrick while on the ground prior to reinstalling it, which increased the final derrick weight to 690,000 pounds.

Twelve lines of double-wide Scheuerle SPMT were then used to transport the six new coke drums from their staging area down a 4.3 percent grade hill to the cranes, where they were set into final position. The old derrick structures were then reinstalled.

The crane’s most recent lift was an 800-ton steam generator that was lifted at a 180-foot radius. The crane has been on the site for a year and a half and it will remain there for another two years, according to Kate Lampson, public relations director.

The Lampson Transi-Lift LTL-2600 has a capacity of 2,600 tons and boom length of 400 feet. For this job the crane is rigged with a 1,600-ton Lampson sling equalizer and specialized rigging provided by Plant Vogtle. 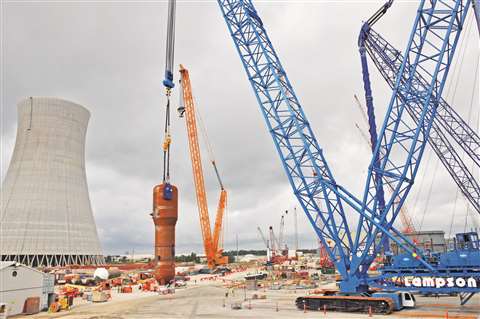 “This was a major lift of 800 tons at 180-foot radius,” Lampson explained. “It had to be lifted over the containment wall while maintaining boom clearance of the wall and a tower crane that was not removed.”

Maxim CraneWorks’ Manitowoc 31000 left a football stadium project in Georgia to go work on a baseball field project in Texas. The crane is a popular stadium and ball park solution because of its ability to get in tight spaces and perform efficient and super heavy lifting.

The 2,535-ton capacity crane is now fully assembled at the Texas Rangers Globe Life Field in Arlington, TX. Requiring more than 150 truckloads, the 31000 started arriving at the jobsite last fall and was fully assembled by mid-December 2018. The crane is lifting concrete and steel components and will install the roof.

Set to open in 2020, the most anticipated part of the ball park is the 240,000-square- foot retractable roof. Owners hope the new “climate controllable” ball field will encourage more fans to come to games in the summer months.

The Manitowoc 31000 is set to lift nearly 19,000 tons of steel used in the design of the roof structure, according to the Texas Rangers website.

Maxim has as many as 24 cranes on the jobsite at any given time.