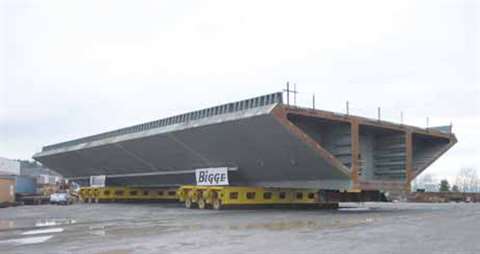 Bigge Crane & Rigging has long been involved in the construction and maintenance of bridges in California, and the spectacular new San Francisco Bay Bridge currently being built is no exception. From the beginning, Bigge has been involved in the monumental project, last year erecting some 15 tower cranes in the San Francisco Bay and this year playing a major role in the transport and lifting of the huge transition spans that will link the concrete skyway bridge deck sections with the yet-to-be-built suspension bridge.

In early January, Bigge started the effort to move the two, 2,000-ton transition spans from Portland, where they were fabricated, to the San Francisco Bay, where they were to be lifted and placed, according to Pete Ashton, vice president of major projects for Bigge.

“Our contract is working for the bridge contractor to load them out in Oregon, put them on a trailer and roll them onto a barge,” he explains. “While they are in route, meanwhile, we are erecting the lift system that is on a couple of girders on the east end and a couple on the west end with a jacking system.”

The strategy to move the transition spans, which Aston says they call “tubs,” from where they were built to the jobsite has taken months of planning and required a separate contract that involved staging the 200 foot tubs.

“We had a separate contract with the fabricator,” says Aston.

“The tubs were fabricated in sections, and each section varied in weight, about 400 tons a piece.

When a section was completed, they would use a smaller trailer take them out of the fabrication shop and out to the yard in front and stage them there.”

Each piece took about six to eight weeks to build. Once they were all built, USI, the fabrication company, then placed them end to end and welded them together into one big piece. Fortunately the fabrication plant is located right on the Columbia River.

“There are so many logistics,”says Ashton. “We are self performing almost everything, contracting out a little fabrication here and there.”

The barge was set to follow the coast line to the San Francisco Bay and then travel under the Golden Gate Bridge to the site wharf in Oakland.

Once the first tub arrived in the Bay, Ashton says there would be more hurdles. Because of the bridge piers, the erection towers and other obstacles, there was not room for the barge to bring the tub into the bay in the correct orientation. The tub would need to be positioned at 90 degrees to the bridge. They planned to use the SPMT again to rotate the tub to correct its positioning for the lift.

At press time, the first tub was scheduled to be lifted sometime between January 30 and February 3, Ashton says. Once that span is up, the second one will be put in place.

“One will go up on the west end and one will go up on the east end,” says Ashton. “There out from the shore a ways and then there's going to be another portion that will be built, the self anchored suspension span. That portion is set to be bid in February.”

Chances are Bigge will be involved in many more aspects constructing the new bridge, which will significantly alter the look and the transportation system in the San Francisco/Bay area.

Ashton anticipates that his company will start taking down the tower cranes in late spring.

“They will start coming down one by one this spring and through the summer and probably into next fall,” he says.

Ashton doesn't downplay the significance of his company's efforts in building the new bridge, claiming that work on the bridge from start to finish is a “significant operation,” and asserting that Bigge is unaware of such a heavy load from a barge ever being lifted so high in the United States.