The gurgling waters of the Snake River paint a scenic picture for fishing enthusiasts. With a contract five years in the making, the Ora Bridge replacement project has been a long-awaited update to a world-famous fishing destination that attracts anglers, fly fishermen and rainbow trout alike. 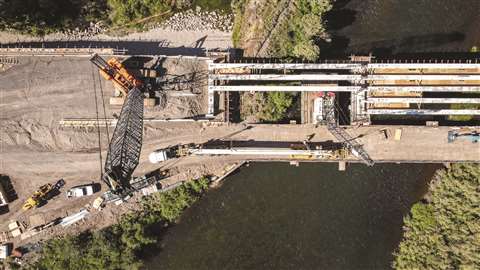 Cascade Bridge teamed up with Mountain Crane to tackle the replacement of the Ora Bridge near Ashton, ID.

Cascade Bridge, a heavy-highway general contractor specializing in bridge construction in Washington and Oregon, recently teamed up with Mountain Crane to tackle the replacement of the new Ora Bridge, located just west of Ashton, ID, along the Snake River. The project included installation of the new bridge approximately 600 feet downstream of the current bridge, followed by the removal of the existing bridge.

According to the Henry’s Fork Foundation, a conservation organization protecting the natural resources of this watershed, the project improves horizontal curves approaching the bridge, reduces roadway vertical grades and widens the roadway to allow for two-way traffic without encroaching into opposing lanes from agricultural equipment or other large trucks. As well, the project required special considerations for monitoring water levels and aquatic wildlife, while also avoiding any disruption to fishing access.

Ryan and Chandler Bingham, the father-son duo behind Mountain Crane’s Idaho division, were tasked with setting 20 precast concrete girders that were 105 feet long and weighed 90,000 pounds. With four spans, all girders were set from a construction bridge. Each girder was set in place by two cranes, a 300-ton Link-Belt 348 crawler and a 110-ton Link-Belt Hylab 218 crawler. 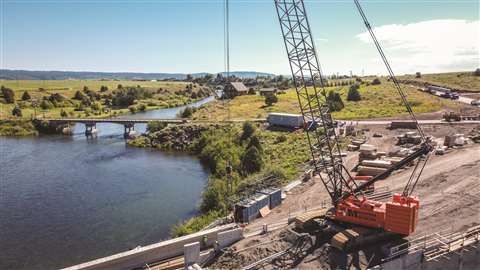 “The riverside location did pose difficult problems,” said Ryan Bingham, heavy lift engineer, Mountain Crane. “The west span could not be accessed because of limited area and a new overhead power line. With that, we had to orchestrate the bridge girder set with two cranes, and a heavy haul truck all from the working bridge which was on the north side of the new bridge piers. This meant picking the girders off the heavy haul truck, moving the truck, and walking with the girder and crane on one end and multi-functioning the crane on the other end to ensure the girder was placed safely and efficiently. Mountain Crane Operator Chase Sorochuk did a phenomenal job making sure that the plan and process on paper, played out perfectly in the field.” 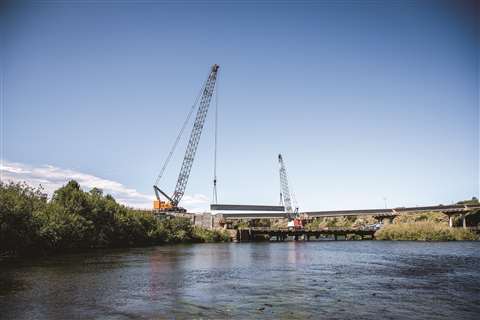 A popular fishing destination, the construction team had to monitor water levels and wildlife.

Using the retracted sideframe chart for the Link-Belt 348 left the team with two inches of deck space on each side. Bingham said the toughest pick was the first bridge span to the west. The Mountain team had to carefully weave the precast girder between both machines.

“Another challenge we had to overcome was maneuvering the bridge girders once both cranes had weight on them,” said Chandler Bingham. “We had a small work bridge that the cranes had to work around in order to make the pick.”