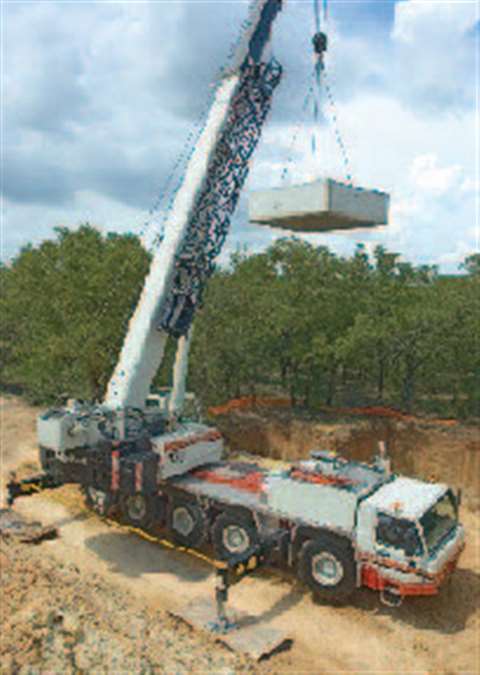 The all-terrain market crane market in the United States can finally be described as “mature,” according to Ingo Schiller, executive vice president of sales for Liebherr Cranes Inc.

“In today's market, the customers are much more careful in evaluating their market needs and deciding between rough terrain cranes, truck cranes, lattice boom cranes and all-terrain cranes,” says Schiller. “Customers are recognizing that a successful fleet for a particular market is blended amongst different types of cranes. They know that ATs can't do everything any more than crawlers can't do everything. They look at cranes on a case by case basis and decide what makes sense.”

And for most of the more knowledgeable and informed customers, the AT turns out to be a solid investment with good returns, he says.

“Customers are taking a more global view of the AT crane and its abilities,” Schiller says. “The crane buyer is no longer limited to asking 'what's the most it can lift at a given radius?' The bottom line in the AT market is that no one is building a bad crane. The question is what is the best crane for my particular market? The critical elements are transport, reach, lift capabilities and a subset is how many additional truck loads of equipment do you have to have to deliver the crane versus the performance capacity of the crane?”

More and more, the answer to these questions leads buyers toward the latest generation of all-terrain cranes.

“They are no longer just a telescopic boom crane, but a crane that performs well with all its equipment at its highest capacity but also performs well with partial equipment, with partial counterweights,” explains Schiller. “That said, ATs are still competitive with truck cranes, but more so where the truck cranes leave off. The AT is simply the carrier that's underneath the boom and superstructure. The design allows for real axle steering, making it easer to carry a longer boom on a longer vehicle and still maneuver on the streets and on a job site.”

The AT market is principally being driven by the need for capacity, maneuverability, road ability and longer, multi-section main booms, according to Doyle Bryant, director of product marketing, Americas, Manitowoc Crane Group. That said, all-terrain cranes still only account for about 15 to 20 percent of the total crane market in North America, behind rough terrain cranes and truck cranes.

Terex Demag's sales administrator John Turner says this his customers are impressed with the simplicity of ATs, in terms of ease of operation, ease of set up and ease of transport. His company designs a specific model for the US market.

“Our Terex Demag AC 140 is our workhorse,” he says. “It is road worthy and easy to operate with touch screen controls, self erection and self assembly.”

“The single biggest market sector is energy, and it covers a wide spectrum from refinery expansion, upgrades and turnarounds to windmills, cogeneration plants, ethanol plants in the Midwest,” he explains. “A good portion of the market is driven by a huge energy appetite and cranes are needed for this expansion. These developments are tied into industries growing in an overall expanding economy.”

Dogotch contends that the AT is a serious contender among buyers because it's a hybrid, a combination rough terrain crane and truck crane with diverse capabilities and capacities.

“ATs are more expensive than both RTs and comparable truck cranes but they offer more versatility, and typically truck cranes and RTs of comparable size do not offer comparable boom lengths,” he says. “ATs offer longer booms in the 60 to 70 meter category of full power main booms not available on RTs or hydraulic truck cranes.”

The latest design attributes of today's ATs have also become a selling point, according to Liebherr's Schiller.

“On the Liebherr ATs, we have longer and longer booms for a given class of crane. Our latest 115 ton has 190 feet of boom, which is something that is unheard of in that class of crane,” he says. “In addition they have the new independent rear steering that allows the crane to be driven in one of six different driving modes, whatever the operator deems to be best for being on the street, jobsite or special operation modes.”

Link-Belt formed an alliance with Tadano Faun to produce its AT3130 II and the new ATC 3200. Introduced last year at ConExpo, the Link-Belt ATC-3130 II has a 130 ton capacity and a 170.6 foot full power five-section latching boom. Rick Curnutte of Link-Belt says his company has focused on assuring its models are user friendly to Americans, providing North American units of measure, pounds, feet and inches, versus kilos and meters.

This point is well taken among all AT manufacturers. Interestingly, not one all-terrain crane sold in the American market is fully manufactured in the United States. The product got its start in Germany, and for the most part, engineering and design was almost exclusively European. It was just in the past 15 years that input by American crane buyers started being implemented.

“Our Link-Belt engineers and marketing team is working with Tadano Faun to develop future models with more of a global specification, not just for the European market,” says Curnutte. “We are listening to our customers and trying to assure the products we sell meet their needs.”

Bryant agrees that America-specific design for ATs is important. For the most part, all of the AT manufacturers produce a different crane for North American than they do for the European market.

Known for its innovation in the AT product line, Tadano recently introduced a safety feature that Dogotch says is getting a lot of attention - the automated lift adjuster. Tadano Faun's ATs feature Automatic Moment Limiters that compensate for boom deflection by elevating the boom elevation cylinder automatically.

Tadano Faun's six AT models also offer a tilted cab that is a bit different from others on the market. “The difference between ours and others is the internal floor board of our cab tilts together inside the cab shell and the cab shell maintains level with the carrier deck. The advantage to that is for operator convenience and ground crew convenience,” says Dogotch.

Before the slowdown in sales after September 11, the demand for ATs was such that many in the industry predicted they would make the conventional truck crane obsolete.

But that too hasn't come to pass. When the market for cranes came back in 2005, the truck crane product was among the most popular, and demand remains high.

“We still have a very strong market for truck cranes,” says Link-Belt's Curnutte. “Our 60 ton, 75 ton and 90 ton truck cranes do very well. But there is a need for machines in the 120 and 130 ton class and that's where the AT owns the market.”

With the AT market now considered to be mature, Schiller says he thinks that the direction of the crane's design will evolve to meet the specifications of the customer, the end-user.

“Rather than product engineers telling the market what they need, whether it's a larger capacity crane or other features, we will see the customer telling the engineers the direction they need to go,” he says.