Moving forward with cranes in Mexico 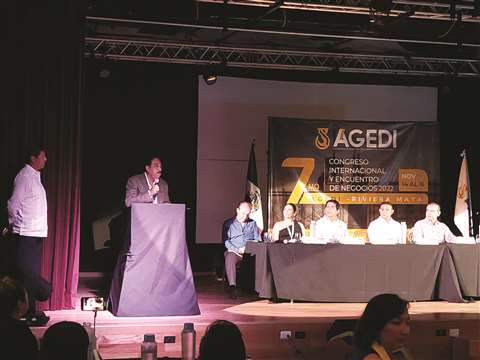 The seventh international congress of the Mexican Association of Cranes, Equipment and Industrial Devices (AGEDI) opens in Riviera Maya

The seventh international congress and business meeting organised by the Association of Cranes, Equipment and Industrial Devices (AGEDI) was held to great acclaim in Mexico.

The event, held between 14 and 16 November in Puerto Morelos, brought together more than 100 executives from the industry, both from Mexico and the United States.

Fernando Bravo, AGEDI president, opened the meeting by referring to the achievements of the association, which began with only 12 members and today has more than a hundred members who together hold more than 2,500 cranes and other hoisting equipment. “Working together, we lift stronger” is the motto of the association, emphasised in the new platform, www.reddegruas.com announced by Bravo at the event. It includes a web directory where users can find a supplier of industrial cranes in just two clicks. “It is an important meeting and networking place for our sector”, he assured.

“We started as a dream and, as a result of a lot of work, we have moved forward. Only in my administration [which began in October 2021 for a period of two years] we have recruited 18 new members and we are already more than 130,” he told ICST sister magazine Construcción Latinoamericana.

The crane and transportation industry has had a good year, according to the executive, “and we expect 2023 to be very interesting thanks to government and private projects,” Bravo continued. 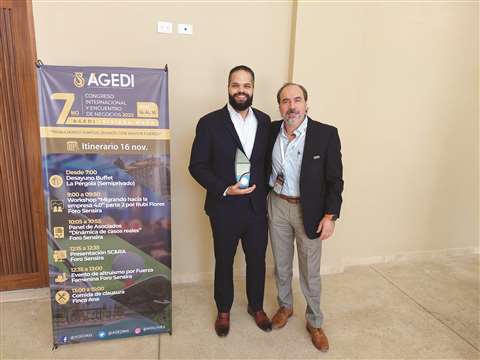 The leader also highlighted the international relations undertaken by AGEDI, especially with the Specialized Carriers & Rigging Association (SC&RA), the leading association worldwide in the lifting and heavy transport industry. SC&RA was represented at the meeting by Jason Bell, director of membership. “Our alliances and agreements are crossing borders, of which I feel very proud,” said the head of Grúas Bravo.

An important part of this internationalisation process has been promoted by Álvaro Rodríguez, AGEDI director and CEO at MPE Group. He also highlighted the presence and presentation of Bell at the meeting and who made an open invitation to more companies in the Latin American sector to the group.

One of the presentations at the meeting was given by Gabriel Morales, project manager at All In Services, a Mexican company that has stood out for its great growth in recent years. It has gone hand in hand with certifications and great recognition. Morales referred to the regulatory changes the country’s energy sector has experienced and how the company was overcoming new challenges to always be at the forefront of the process, obtaining national and international certificates to face the new scenario.

“These certificates have allowed us to develop endless manoeuvres throughout the country; manoeuvres that we have carried out with zero accidents”, highlighted Morales. At the same time, the well-structured management process obtained thanks to the certifications have allowed All In Services to improve the efficiency of the organisation (at all levels) and increase the motivation of workers. “All this helped to improve the productivity and effectiveness of the company. It has not been easy, but it has contributed to the success of the company today”, he assured.

Mexico is a market with great opportunities, especially for the lifting and transport industry. This would have been evident after the presentation by Miguel Pérez, co-founder and CEO at Sapco Energías, a company specializing in the procurement and implementation of power generating plant.

The executive warned that Mexico urgently needs to renew and improve its generating plants. “The country has many plants with efficiency below 30 per cent and today they are looking for plants with efficiencies above 60 per cent,” he said. In this sense, he highlighted the government’s plan for the construction and adaptation of eleven plants in the national territory, which will be based on natural gas and partially supported by diesel. According to Pérez, these initiatives will require hundreds of thousands of crane hours, which is a tremendous opportunity for AGEDI members.

A combined cycle plant can be intensive in the demand for cranes. Pérez stated that, for example, the Salamanca plant would require more than 60,000 hours of crane work with between 25 and 800 tonnes of capacity. “At rental prices, in these eleven projects we are talking about 760 million Mexican pesos (more than US$39 million), a very large package that gives space to many companies. There is a lot of margin to serve the market”, he presaged.

But Pérez warned that companies specializing in services are not only looking for suppliers but also commercial partners, so it is an essential requirement to be professional and provide not only equipment, but also a support structure, both technical and commercial.

The environmental issue could not be unrelated to the meeting and this is how Stephen Spolarjic, Bechtel corporate logistics manager, and Rolando Ramos, the company’s regional operations manager for Latin America, referred to the importance of calculating carbon dioxide emissions in industry, something especially relevant if it is considered that 14 per cent of the world’s greenhouse gas emissions are caused by transport.

Ramos mentioned that a Panamax ship burns around 238,000 litres of fuel daily; transit between Shanghai, China, and Texas, United States, takes 35 days. There are more than 1,000 Panamax size vessels operating globally. “Taking these numbers into account, it is easy to see the magnitude of the problem,” he said.

“It is important to know our numbers, to know exactly our fleet, because the carbon footprint registry will be mandatory in the future,” said Ramos. But Spolarjic acknowledged that the challenge is immense. “Measuring the carbon footprint is especially complex in cargo transportation: are escorts considered? the days of stopped charging? Today there is no published index or standard, but as Bechtel we are working on this”, he warned.

Today’s industry must incorporate all levels of technology. Something that may sound veritable is not in an industry characterised by rather traditional structures. Rubí Flores, from Grow, an incubator for creative minds, was in charge of a workshop that conveyed the need for companies to join industry 4.0 under an essential question: how to make our companies transcendental? “If they do not join this new way of doing business, it is the chronicle of a death foretold,” said the executive, referring to the book by Gabriel García Márquez. “Education and a change of mentality are essential to adapt to changes,” he stated.