Construction is underway on the Globe Life Field in Arlington, TX, soon to be the new home of the Texas Rangers. The project broke ground September 28, 2017 and is on schedule to be completed for the start of the Major League Baseball 2020 season.

Maxim Crane Works, the largest coast to coast crane supplier in the country, was selected as the chosen crane supplier for the state-of-the-art project, which includes seating for 40,000 spectators, air-conditioning and a retractable roof. 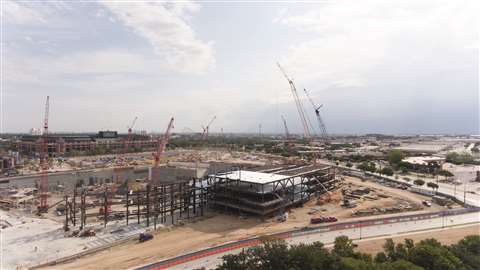 Maxim Crane currently has eight Manitowoc crawler cranes on the jobsite, including four 2250s, two 999s, a MLC-300 and a 248. Maxim has also provided rough terrain cranes on the project, including two 65-ton units and a 90-ton unit.

With more than 35,000 tons of steel to be erected including more than 9,700 pieces with an average weight of 9,200 pounds each and an additional 2,100 pieces of pre-cast concrete averaging over 28,000 pounds each, it’s no surprise more Maxim cranes are scheduled for delivery over the next three to four months.

Additional cranes on order include two Manitowoc 2250s, two Manitowoc MLC 650s, a Manitowoc 999 and the flagship of the Maxim fleet, a Manitowoc 31000 with its 2,535-ton capacity. The 31000, known to be the largest Manitowoc crane in the United States, requires more than 128 loads of freight

to mobilize to the jobsite. The 31000 is scheduled to arrive on the jobsite in late October of this year. It will be used for placing the retractable roof and supporting structure.

“Maxim Crane Works is proud to partner with the organizations involved in this project,” said Randy Johnston, Maxim’s Central Region president. “We pride ourselves on our ability to service all size projects and customers throughout the United States. Our number one goal is, and will continue to be, to provide the safest most professional commodity on the market to all our customers and their affiliates.”

He said that Maxim separates itself by being able to offer a “total package” of crane and rigging services and expertise.

“We do not limit ourselves to one particular market or target audience, and can therefore offer a wider array of equipment and personnel options to our customers,” he said. “Maxim’s ability to move fleet and personnel to the areas where they are needed allows us to be able to provide an exemplary level of execution to projects this size.”

Maxim will have 24 cranes on site throughout this project. 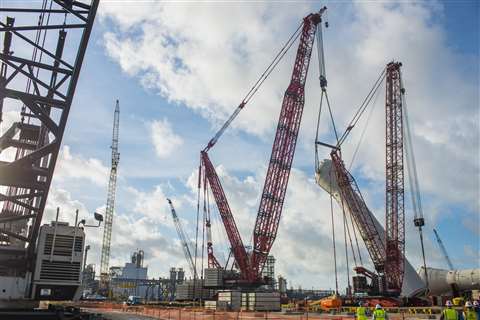 With its massive boom rising high into the sky, the Liebherr LR13000 was strategically placed to lift and install both reactors from one position. The Terex CC2800 handled the tailing work.

Due to the LR13000’s high lifting capacity, only a boom change was required to streamline lifting from one location, saving both space and time for other work taking place inside the plant. With its massive powered boom rising high into the sky, the LR13000 was strategically placed to lift and install both reactors from one position. The crane was outfitted with a complex boom configuration, boasting a lifting radius of 33.5 meters and superlift capacity of 1,500 tons.

The Liebherr 13000’s configuration is known as PDW3B. The crane was rigged with a 96-meter main boom and outfitted with a 72-meter jib. The rigging on the LR1000 involved a 39-foot spreader bar with a 32-inch diameter. It had a capacity of 1,212 tons. The 1-1/2-inch and 2-1/2-inch 9-part wire slings combined for a total rigging weight of 49,860 pounds and a total rigging length of 105 feet.The larger reactor weighed a total of 725 tons and stretched 49 meters long, with the smaller reactor weighing in at 500 tons.

These lifts were executed successfully with tailing help from one of Mammoet’s Terex CC2800 crawler cranes. The CC2800 was rigged with 66 meters of SSL boom at a radius of 12 meters.The tailing rigging included two 50-foot long 3.5-inch wire rope slings. Following the project’s expected completion in the first quarter of 2020, the plant expansion will increase the site production capacity by an additional 450,000 tons per year.