On a hot, sultry Florida summer night in July, the City of Orlando made good on its promise to provide a safe, comfortable and connected pedestrian system for Colonial Drive (SR-50), a heavily traveled main artery crossing through downtown Orlando.

Work needed to be safely completed by 5 a.m. for the busy six-lane highway to open for morning traffic.

On this night, after years in the planning, the final elements of a pedestrian walkway were ready to be literally “shoe-horned” into place by man and machine in a delicate slow-motion dance of precision pivots in a finely tuned ballet of the behemoths as choreographed by the city fathers, planners, financiers and the lynchpins of industry whose know-how gets it done.

There would be but a single performance – one chance to get it right – and it had to be coordinated perfectly within a specific window of time. There was no margin for error or it could seriously jam up the movement of the city transportation systems and its citizenry.

All of the key elements central to the project had to be constructed and assembled as close to the point of execution as possible as any long-haul movement of a 230-foot structure weighing in at 250,000 pounds would be impossible.

The pedestrian bridge was created, funded and executed through the combined efforts and resources of the City of Orlando and Federal Highway Administration funds through Florida’s Department of Transportation (FDOT) local agency fund. The bridge spans a busy six-lane highway as well as the Florida East Coast Railway tracks. It would have to travel a distance of 230 feet for placement.

The $9.2-million design/build contract was awarded to prime contractor Southland Construction, which designed and assembled the steel bridge adjacent to I-4 and SR-50. Florida-based Beyel Brothers Crane and Rigging was sub-contracted to perform the rigging, lifting and maneuvering of the immense span into place within a very tight time requirement of between 10 p.m. to 5 a.m. of the same day during which all street and railway activity would have to be halted.

Due to various entertainment venues going on downtown and the Orlando Lions soccer match being played a few blocks away, FDOT would not allow the road to be closed before 10 p.m. Contractors had to have all work safely completed by 5 a.m., the set time for the road to open. Railway traffic was also affected by this closure as the new walkway would cross over a double set for Florida East Coast Railway tracks.

Prior to the move, Beyel assembled the following pieces of equipment from its fleet: a 330-ton Liebherr LR-1300 crawler crane, a 600-ton Terex AC-500 all-terrain crane, a 6-line Kmag SPMT and a new 8-line SPMT with a 250-ton bolster.

In the days prior to the move, Beyel Crane and Rigging assembled its heavy lift team and planned the lift. The Liebherr LR-1300 was placed on the right of way to the east side of the railway tracks. This crane would move to the west at lift time. The Terex AC-500 AT was installed on the southwest side of the tracks close to the new concrete bridge tower support.

On moving day, during daytime and before the road was closed, Beyel Brothers’ riggers assembled two Kmag SPMTs, one 6 in-line wheeled unit and one 8 in-line unit next to Interstate 4 (I-4). Both units were moved, chained and secured under the pre-assembled bridge. 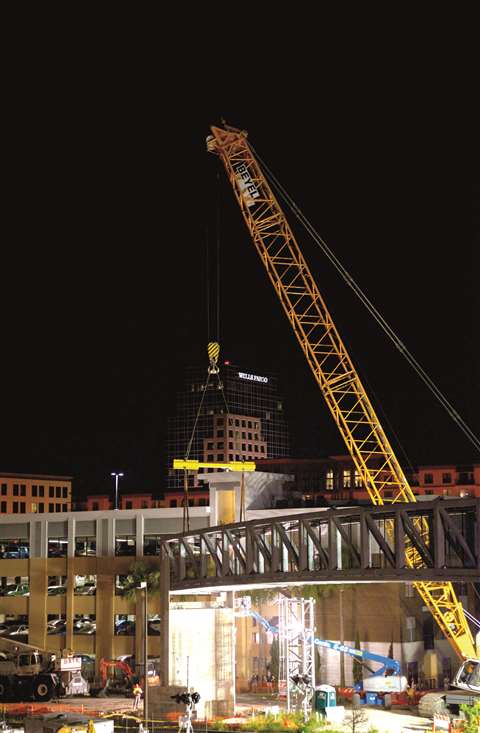 The Liebherr LR-1300 was placed on the right of way to the east side of the railway tracks and then moved closer in at lift time.

Under the direction of Phil Beyel, a veteran loadmaster using a remote-control box to command the independent wheel movements of the Kmags, the bridge was moved at an angle and as close to SR-50 as possible without impeding traffic.

Flood lights were placed at strategic work points as darkness fell. As soon as the road was closed, a flurry activity started with the moving of manlifts and equipment to pre-set locations within the closed area. Safety vehicles and Orlando Police units were on the roadway to prevent any wayward drivers from entering the area. (At least one did manage to stray in.)

Beyel riggers installed the lifting cables and spreader bars on both cranes and erected them to a safe height.

Phil Beyel controlled the front Kmag SPMT while his counterpart, Craig Rideout, maneuvered the back unit in unison as it was moved very slowly over the curb after dunnage was in place. Walter Frost and Bobby Cambell served as spotters to Beyel and Rideout respectively. As soon as there was clearance between the I-4 wall and the end of the bridge, Beyel’s two Peterbilt heavy-duty haul trucks were moved around to the front of the bridge near the railway tracks.

They would be used to move the Kmags back to the laydown yard after the lift. At the same time, large steel plates were moved by a front-end loader from the laydown yard over to the north sidewalk to protect the curbing, sidewalk and railroad crossing area.

When the bridge front section arrived under the Liebherr crawler’s spreader bar, riggers in a cherry-picker hooked up the lifting straps. The chains from the bridge to the Kmag were removed and the crane lifted the weight off the Kmag, which was then moved away.

As Beyel’s Liebherr-1300 crane operator Tom Thomas slowly swung the bridge over the railway tracks, the rear Kmag operator matched his moving speed with both stopping as the bridge came within inches of the concrete tower support. The rear Kmag was removed in the same way as the front. Gorden Rideout, a 30-year veteran operator with Beyel Bros., was at the controls of the south Terex AC-500 as he and Thomas skillfully and in-tandem made the lift while gradually swinging the bridge to the northeast, clearing the north concrete tower. Once the bridge had cleared the tower the whole rig was swung slowly to the southwest, inching its way into the south tower’s rectangular concrete opening. Both ends were lowered onto the towers mounting bolts with utmost precision and in unison.

The final task was to clear the area so the road could open for morning traffic.