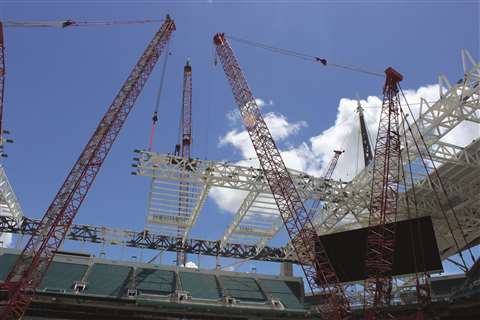 The erection of the shade canopy was scheduled during the Miami Dolphins off season. To accommodate the schedule, significant subassembly of components into large, self-supporting sections was completed. Lifting these large subassemblies over the existing stadium required very large cranes, many multiple crane picks and involved more than 24 two-crane picks.

To mitigate risk, Ruby hired experienced crane operators and made sure that loads were limited to 75 percent of the cranes’ capacities. It was also essential to develop critical lift plans and accurately determine weight and center of gravity of the sections being lifted. Limiting crane movements and accurately determining weight and the center of gravity of each lifted load was an important safety standard.

For the heaviest and most complicated lifts Ruby planned four lift plans that would involve four cranes working in tandem to lift two 450-foot outer sideline box trusses weighing 700 tons each and two 350-foot outer end zone box trusses. Custom-designed lift frames ensured the loads were equally shared by the four cranes and that ground bearing pressure on the soil beneath the cranes was kept within acceptable limits.

The specially designed lift frames weighed 35,000 pounds each, but they were capable of safely lifting 350 tons. The lift frames were used to assure that the four cranes could share the load equally. Ruby’s team incorporated the entire length of each outer sideline and end zone box truss into a single lift. Over the course of the job, more than a dozen cranes were used to erect the structure.

“The existing stadium was in the way of any shoring that was needed for the erection of the canopy steel, and the schedule just didn’t allow for the installation of shoring and then repair of the finished stadium spaces,” said Allison Shenberger, project engineer/project manager, Ruby+Associates, Inc. “The idea to pick the 450-foot-long, 1.4-million-pound sideline box truss in one piece with the four large cranes solved the problem, and was one of the factors that allowed the project to be completed in time for football season.”

The cranes used on the project were provided by Maxim Crane Works and Erickson’s.