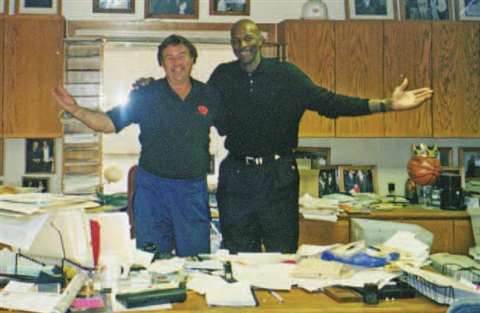 Community service is an important part of Terry Emmert's activities, and he has developed deep friendships with politicians and sports celebrities throughout the US while participating in this work. P

In baseball, a player that can get the key hits, make big home runs, steel bases, throw out the tying run at the plate and make spectacular defensive plays is termed a “five-tool player.” If there were a five-tool player in business, Terry Emmert would definitely fall into the category. An energetic and certified “Type A” businessman, Emmert makes the most of every day, dedicating a portion of his expertise, wit, charm, empathy and heart to people and efforts he deems important. In baseball terms, Emmert bats a 1,000.

Terry Emmert founded Emmert International in 1968, growing it into one of the largest specialized transport companies in North America. When it comes to transporting oversized, over dimensional and downright difficult to move objects, Emmert International has developed a reputation as the company to call to solve rare and difficult rigging and hauling challenges. If there's a piece of equipment needed that doesn't exist, Emmert will design and manufacture one to get the job done. The company has won the SC&RA Job of the Year contest 21 times (see box).

In addition to running one of the largest and most visible specialized transport companies in the world, Emmert owns and oversees the management of two tennis and swim clubs, a large-scale industrial and residential real estate development and property management company, the largest breeding herd of Asian water buffalo in the US, a slaughter house and meat packing plant, an organic orchard and, if that were not enough, an international basketball team which last year made it to the western regional playoffs.

And then there's Emmert's community service, a list which is long and varied. He has long been active in the SC&RA, chairing the organization's transportation group board. He has also been active in his community, chairing hundreds of programs and campaigns to benefit various causes, mainly youth development.

How does he have time for all this? His answer is simple, “you really only need six hours of sleep a night.” In this interview Emmert discusses the specialized transport business and all the “other” things that take time out of his day.

What is it that you like about transporting, moving, lifting and rigging oversized and heavy objects? What come to mind as the most challenging projects your company has undertaken?

It's definitely the challenge to do what others say can't be done, to accomplish projects that others say are impossible. Basically it's charting a new territory in transportation. We often do what hasn't been done before. We work to come up with new ideas and new methods, innovative ideas. That's really what it's all about, traveling down a highway hauling something that no one thinks can go down a highway.

As far as the most challenging projects -what comes to mind are numerous jobs that challenge in a different way. The Fairmount Hotel in San Antonio, TX, that was a unique job. There are other buildings that have been moved, but what is significant about this job is that we moved it with all our own equipment that we had designed and manufactured ourselves, all by Emmert, which made it a tremendous accomplishment. The Las Vegas odds makers said it couldn't be done. We did it. (See box story opposite)

Another job was a record breaking haul, the largest load at that time across the longest distance – a generator that we moved from Pensacola, FL to Los Angeles. We say the haul involved seven states and one foreign country, that foreign country being California. We moved the generator and since then the California DOT has recognized the dolly transport system as a safe, dependable, fast form of transportation. The state of California had no idea that dollies could travel at speeds of 35 to 40 miles per hour.

What is the biggest challenge for Emmert International in today's business environment?

Dealing with all the changes that have taken place in our economy and the people available to work with. There's a tremendous challenge to find the right personnel for the right project. It's like a coach for a team, you need to be able to pick the right player for a job. But like coaching a good team with all the talent in the world, unless you put together the right team, you don't win. You have to have a coach who knows when to put the right player in the game at the right time, matching up the right personnel with the task. This is difficult to do in today's employment world because of the lack of qualified people being available.

It is now a very litigious society we are doing business in. [At Emmert,] we have been blessed to have a great team that gives an unbelievable team effort and that brings us a lot of customers and repeat business.

Fast forward 10 years – how will Emmert International be different? What about 20 years from now?

I think this will continue to happen at Emmert. We are going to be challenged to come up with new ways to move larger loads, bigger loads, safely and complying with all the regulatory agencies and find ways to properly distribute the rates in compliance with these regulations.

Do you envision expansion beyond Emmert's current scope of operation? Merger? Acquisition?

We have performed many acquisitions. The most recent was we expanded into Texas in the 1990s. We've acquired heavy haul divisions and specialized carrier companies. As for what is next, if the right opportunity is there we will look at it. We do not have any prepared plans. We don't have anything on the immediate horizon.

Emmert has a fleet of some 500 pieces of equipment, vehicles and trailers. Of all the equipment and vehicles in the Emmert fleet, which is the most impressive to you?

I believe our dollies are an innovation; we started making dollies in 1970. In 1974, we developed a 50 ton dolly and in 1976, a 60 ton dolly and in the 1980s we developed the self propelled hydraulic dollies. In 1982, we started building a fleet of 70 ton dollies which were utilized in that Fairmount Hotel move. When you look at dollies, we think of a set of tinker toys. You can take and put them together in different combinations to build a transporter and make it into different configurations based on what is required – spreading the weight with a wider or longer base.

There's one dolly we call Big Red. Big Red won us the hauling job of the year in 2002. It was a big load that was hauled in Texas. We have four or five versions of the Big Red. We have seven different hydraulic dolly transporters, seven different styles and configurations that you can use component parts from other units to make them work, they are all red, but Big Red is the biggest one, and in all honesty that's our key mark- the dollies we manufacture and build the transporters using our own tinker toys.

Our dollies have been used to transport items such as the Hubble telescope, the Star Wars project, the Delta IV Rockets, and the Spruce Goose (see box left), another one of those that would go in the “challenging job” category.

We also have a railcar that is Big Red on rail. It's a 20 axle rail car with the largest deck section in the US. It works hand in hand with our Big Red over the road. Everyone likes to play with trains and we have a big train.

We didn't develop the rail car, it was built by a railcar manufacturer. But it's available in our fleet and it opens up a lot of doors and opportunities for us. We have a project coming up for our rail car that will be the largest load ever to be transported by rail in the US.

Finally, about our equipment, a couple of things we've been instrumental in is taking a standard truck and adding special transmissions and gearing, modifying a factory truck to meet our needs...special gearing, special decks, special beds, winches and even steering. Two of our earlier prime movers we built in the 1970s are still operating on a daily basis and both are crane carriers. One is named Brutus and one is named Sampson.

In addition to running Emmert International, you are involved in many other business ventures – real estate, tennis clubs, a basketball team, organic farming, a herd of buffalo, horses, plus all the industry and community service. How do you have time for it all?

I would say it's a great ability for multi-tasking. [As for community service], I have a hard time telling charities and organizations and functions I don't have time. I truly feel that if we do not have the time to help our youth today, we won't have a future tomorrow. Our youth need to have a decent chance. It's a complicated world they live in now, that's why I've always been so involved in youth organizations.

I firmly believe that the United States is a land of opportunity and we owe everybody an opportunity. We need to take care of our elderly and our young people and those who are less fortunate and have a handicap of one kind or another. We don't owe anybody a free ride. If they're able bodied they need to be a part of our society and to contribute to this country and support this country. I've had the opportunity to meet some wonderful people who are great mentors and great role models, not only in the SC&RA but also in the business world. I am very passionate about giving back, and it takes a lot of time to give back. Even in our industry, we need to give back. I can say that the SC&RA has allowed me the opportunity to make some wonderful business contacts and develop friendships with wonderful people.