ACT presents a plethora of key take-aways from Bauma 2019.

The Bauma tradeshow in Munich in April was a successful event on many levels. North America-centric exhibitors and attendees had a lot of positive things to say about the show.

“It was a great show with huge North American attendance,” he said. “It was a buying show for the attendees, and the crane industry is in a good mood with much confidence for 2019 and into 2020.”

The ACT editorial team has spent the past couple of months cataloging the many “take-aways” from the show, and they follow in no certain order.

JASO tower cranes signed contracts for four of its new J1400 tower cranes. This new model, launched just before the show, is one of the biggest cranes built to date by JASO. 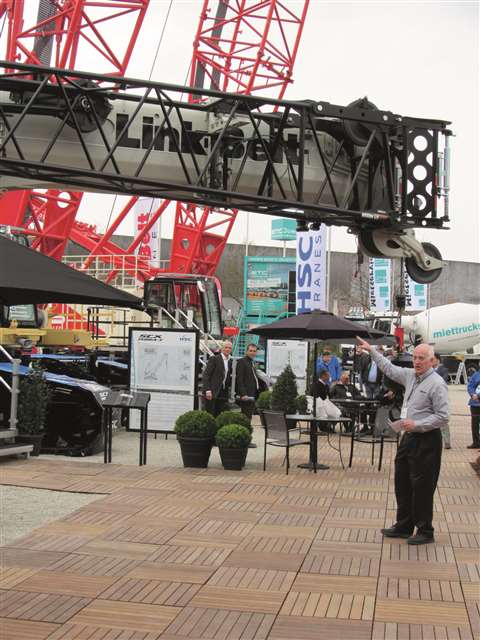 Front and center was the Liebherr LTM 1650-8.1, the new replacement for the company’s 551-ton capacity LTM 1500-8.1. The new crane has a nominal capacity of 772 tons. For the boom, there are 177-foot and 262-foot options. It is designed to deliver maximum performance and maximize what is possible on an eight-axle carrier, Liebherr said. Lattice boom extensions include fixed jibs from 18 to 180 feet and the luffing jib options range from 69 to 299 feet. The fixed and luffing jibs can be fitted to the 177-foot and 262-foot booms. Maximum hook height is 502 feet and 361 feet is the longest radius.

Link-Belt debuted its new 120|RT rough terrain crane to the global market. The 120|RT has a six-section 38.3 to 164.1-foot pin and latch formed boom. Notable features on the 120|RT are the V-CALC system with 81 outrigger configurations, new cab design and controls, maximum line pull of 23,632 pounds and one-person fly erection.

Link-Belt also made the international debut of its 175|AT all-terrain crane. The company’s newest 5-axle all terrain has a base rating of 150 metric tons and 175 tons.

W.O. Grubb Crane Rental of Richmond, VA purchased the first production Link-Belt 175|AT all terrain crane. The 175|AT will go into W.O. Grubb’s taxi crane rental lineup in Northern Virginia, with delivery mid-year 2019.

Liebherr unveiled the Mobile Crane Finder in its mobile and crawler crane technology Pavilion at Bauma. This is an online advice program that helps users to find the perfect mobile crane for a specific hoist. The user enters the required data, including the weight of the load, the required hoist height and the radius. This data is then used to check the corresponding load chart tables automatically, after which the program will display the perfect crane.

Jekko showcased several new products, including the JF990, the hybrid version of model SPX1280HYB, the full electric lithium-battery SPX532 and in the minipicker category, the MPK06. Also new is the new Jekko radio remote control system and the J-Connect telemetry system for all the new Jekko mini cranes. Jekko’s MD Diego Tomasella said the company has been focusing on research and development, innovation and design of simpler and faster products and analyzing issues with the eyes of an operator.

The Jekko JF990, a development in conjunction with Fassi, uses a Fassi loader crane on a Jekko crawler carrier. Claimed as the world’s largest mini crane, the load moment rating is 100 metric ton-meters. It weighs 23 metric tons.

Goldhofer said booth traffic was great and it saw a strong interest in its products. “The great interest of trade visitors in the new products presented to the public for the first time and the high demand for high-quality transport solutions have more than exceeded the expectations,” said Rainer Auerbacher, a member of the Management Board Transport Technology at Goldhofer. New from Goldhofer was a low-profile tire, an electronic steering system and a floor covering. The PST with freewheeler function and the ADDRIVE 2.0 heavy-duty module, which can be used as a self-propelled and towed module, were well received, Auerbacher said.

A big splash for Bigge at Bauma!

Bigge Crane & Rigging made a huge splash at Bauma. In the crane sector, Bigge participated in handovers at Liebherr, Link-Belt, Manitowoc and Kobelco. The deals included a variety of classes of crawler and tower cranes that will be added to what Bigge terms its “perfect fleet.”

Liebherr handed over the keys to Bigge for 16 crawler cranes including 15 LR 1300 and one LR 1800. Bigge also placed orders for two LR 11000 units. Bigge already has more than 100 Liebherr models in its fleet.

“The headline here is 19 cranes in 2019,” said Jack Fendrick, vice president and chief operating officer of Kobelco. “Today we are here to celebrate Kobelco and Bigge Crane’s relationship. The relationship is based on a mutual trust between two companies that are dedicated to providing the highest quality of product, service and support.”

At the Manitowoc stand, Bigge’s team celebrated the purchase of additional Potain MDT219 city class cranes for its rental fleet in North America. Several of the crane purchases Bigge made will be shown with Bigge branding at ConExpo 2020. 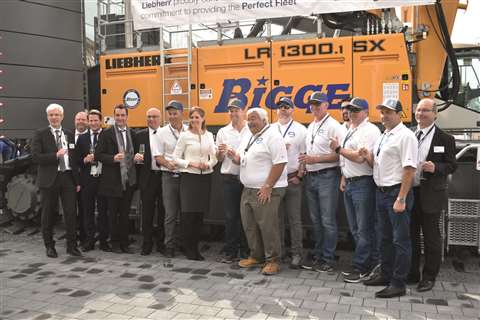 Raimondi Cranes unveiled the LR273 luffing jib crane and showcased three other tower cranes. The weight optimized LR273 is ideal for clients who require a machine that is easy to install and boasts excellent load curve and big drum capacity. It has an 18-ton maximum capacity with a lengthy jib – clocking in at 60 meters. The LR273 in its standard configuration can work in two, three and four falls, while a single line extension will be offered as an optional add-on. Raimondi also showed the LRH174 as well as the SL20-TC crane lift and the Deluxe R16 crane cabin. 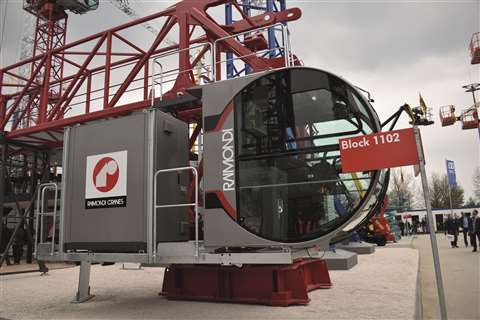 The sleek Raimondi cab was displayed at ground level to allow visitors to see the design up close.

AMCS showed its new collision avoidance and zoning system, the DCS 61-S, (Driving Control System Safety). It manages tower cranes working together and features include three essential functions of anti-collision, zoning and data display and logging. AMCS also previewed its telematics system called IoT Lifting. A SIM card fitted to the DCS 61-S can be used to collect data on each crane at a web portal. This data includes records of when the crane is powered, in motion, left to weathervane and so on. Statistics can be produced from the data to indicate how much time is spent working, hoisting and how much load.

Gunnebo Industries exhibited a range of lifting and rigging products and solutions, among them the latest member of the UKN-family, the UKN-20. The UKN-20 has a WLL capacity of 20 metric tons, making it perfect for extra heavy lifting, the company said. Gunnebo Industries produces blocks, sheaves, chain, components for chain and wire rope slings and shackles, which are produced in Sweden, Norway and the United States. 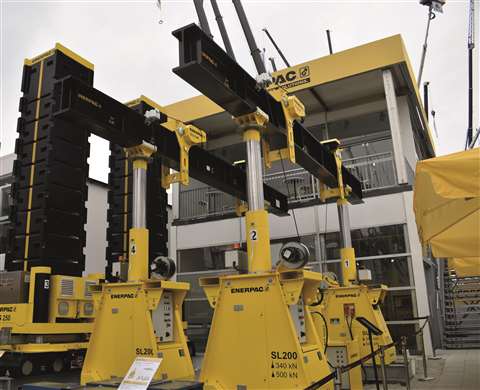 The Enerpac SL200 gantry system was front and center.

Designed for oilfield work, the Zoomlion RTG ZRT850 rough terrain crane made its global introduction at Bauma. The RT was created to work in special operating environments and requirements in oilfields around the world, featuring reliability and stability, sand-proof and fire-proof performance, heat-dissipation performance and cross-country capability, Zoomlion said.

Teufelberger’s new EVOLUTION TK 27 is envisioned for the next generation of crawler cranes where the trend is to provide higher lifting capacities utilizing smaller, stronger and lighter weight reeving system components, the company said. Due to the Superfill Compaction technology, the new steel wire rope from Teufelberger-Redaelli features significantly higher breaking forces as well as a longer service life on account of the lower specific load, the company said. Also getting a lot of attention was the soLITE fiber rope, which features a patented fiber-rope-based steel wire rope construction. The result is a combination of the advantages of a high-performance steel wire rope with those of a high strength fiber rope. The new fiber rope was demonstrated on three Liebherr tower cranes at the Liebherr stand.

Thirteen products were presented by Faymonville and its subsidiary Cometto. The BladeMAX made its debut as a transport solution for the new generation of wind turbine blades. The BladeMax is mounted to Cometto’s 6-axle MSPE 48. Also on display was the DualMax trailer designed for the North American market, which can be widened from 14 to 20 feet loaded out. 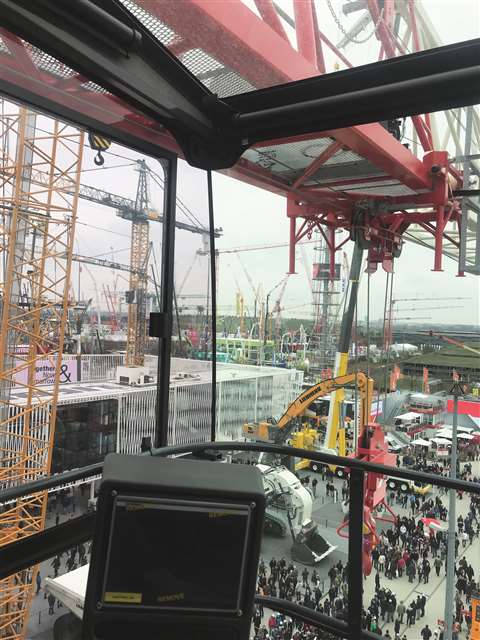 The tower crane at the Terex stand allowed visitors to see the tradeshow from a higher up perspective.

The company inked deals for two of its massive Demag CC 8800-1 crawler cranes and other multiple crane orders were made for the Demag AC 700-9 all-terrain crane, the Demag AC 100-4L, 100-metric ton (120 ton) capacity class all terrain crane, and the Terex AC 40/2L. Terex also saw high interest in its new 11-ton capacity CTT202-10 flat top tower crane. Orders were logged for several units of this crane as well as the CTT 132-6 and CTT 162-8 models, the company said.

Comansa announced the upcoming addition of another model to its wide range of large flat-top tower cranes. The new 21LC1400 will be available worldwide in September and will come in two versions, with maximum load capacity of 50 or 66 tons (110,230 or 145,500 pounds). A new single and compact trolley has also been designed for the 21LC1400 instead of the double trolley system. Also announced was the upcoming Quick Set, an electronic limitation system that will reduce the set-up time of the cranes from three hours to 45 minutes and will also reduce the number of staff during such operation. Comansa displayed the 50 ton (110,230 pound) flat-top model 21LC1050, which was the largest hammerhead crane at the Munich show. The exhibited crane was sold with full jib and mast configuration to rental company and Bauma co-exhibitor BKL Baukran Logistik. Comansa also showed its ultra-sleek Cube cab, which was at ground level for all visitors to see its fully glazed front, spacious design and comfort features for the crane operator.

Wolffkran displayed a trio of cranes, the new Wolff luffing crane 133 B, the Wolff 1250 B and the Wolff 6020 Clear. Although seen around the world on jobsites, Bauma was the first time the Wolff 1250 B was on display to the general public at a trade show. The Wolffkran stand also featured the tallest crane vantage point on the bauma fair grounds.

Transporter Industry International (TII) Group showcased its self-propelled mobile transporters. The SPMT and SPMT Light were featured in a live show each day. For operators of wind turbines, the TII Group offered a range of transport solutions. The focus was on a wind turbine blade adapter with a positioning angle of 70 degrees. The TII-Group consists of four brands – Scheuerle, Kamag, Nicolas and Tiiger.

Effer and Hiab debuted a joint booth at Bauma, following Hiab’s acquisition of Effer. On display was Effer’s R.A.C.E. (Remote Assistance Control Effer) technology, the new connectivity system for Effer cranes developed with Progress 2.0 electronics, allowing the operator to always stay connected to the crane and to consult its data.

On display at the Maeda booth were an impressive line-up of mini cranes. New to the market are the MC285C-3 and MC405C-3 mini crawlers.

RaycoWylie demonstrated the new i4500 load monitoring system for knuckle booms and a new anti-collision system for tower cranes. According to the company, this is ideal for modernizing older crane models.