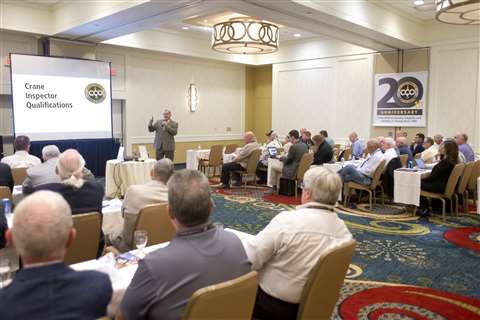 After many years of dialogue with industry as to the meaning of certification and how it should be conducted, OSHA published a Proposed Rule towards the end of May that the Agency hopes will fix the issues that have stood in the way of mandatory crane operator certification originally provided for in the crane rule published in 2010. Here are five key elements of the proposed revision.

Everyone’s been saying it for months (if not years) but OSHA has now officially proposed removing the requirement to certify by capacity of the crane. They have a sound reason for doing so: It’s unnecessary.

And it would impose a crushing financial burden on employers for no additional gain in safety. As the Proposed Rule states: “OSHA is unaware of any direct evidence establishing a safety benefit for requiring certification by capacity.” For now, they’ve left it in as an option, but that may go also. In its proposal, OSHA invited comment on whether the language “or type and capacity” should be removed in the final rule given that it “could confuse the industry as to whether capacity is required” at state level.

2. Employer Evaluation is IN.

“The key difference between this proposal and the existing standard is that the proposal would permanently maintain the employer’s duty to evaluate its operators.” That’s how OSHA summed up its new stance on this thorny issue that has been at the center of the dispute between industry and OSHA over the role of certification. While “all stakeholders reiterated that operator certification is beneficial in establishing a minimum threshold of operator knowledge and familiarity with very basic crane operation,” OSHA states in the Preamble to the Proposed Rule, “every employer with whom OSHA spoke stated that the employer’s role in ensuring the competency of crane operators should be allowed to continue.” That’s because, “a standardized test cannot replicate all of the conditions that operators will face on the jobsite.” The question is now: How detailed and frequent should that evaluation be? While the requirements of the Proposed Rule are considerably less complex than previously drafted by OSHA, there’s likely to be considerable employer feedback on this issue for OSHA to review.

3. Smaller cranes are still IN.

There wasn’t much doubt this but that didn’t stop some industry organizations seeking to have smaller cranes (5,000-35,000 pounds capacity) or those typically used for repetitive lifts or used only intermittently excluded from the certification requirement. While the exemptions for derricks, sideboom cranes and equipment with a maximum manufacturer-rated lift capacity of 2,000 pounds or less remain, OSHA decided not to grant requests for exemptions for these other cranes since they share “many of the crane hazards presented by larger cranes.” OSHA also concluded that the underlying causes of crane fatalities and injuries did not necessarily decrease for cranes used in duty cycle work.

4. The Employer Must PAY.

The language of the current rule has now been revised to clarify that employers must provide certification at no cost to their employees. This is in line, OSHA points out, with other rules that require employers to provide such items as PPE and medical exams at no cost.

5. The Rule will be Effective … When?

The deadline has been extended twice, and the existing rule is due to go into effect in November. Can OSHA get this Proposed Rule into a Final Rule in time? It doesn’t think so, which is why it has proposed requesting an additional six months to get everything in line. That would take us to April 2019. Quite what would then happen on November 8, 2018 is down to OSHA but one possibility is that they would issue a “no enforcement” order regarding the existing rule language (in section 1427) to their compliance officers.