Providence Park – home of the Major League Soccer Portland Timbers, National Women’s Soccer League Portland Thorns and Portland State University Vikings football – has been amid a major renovation that is set to wrap up this spring. The $70 million project added 4,000 seats and other amenities to the outdoor stadium that has enjoyed a long and storied history in downtown Portland, OR. 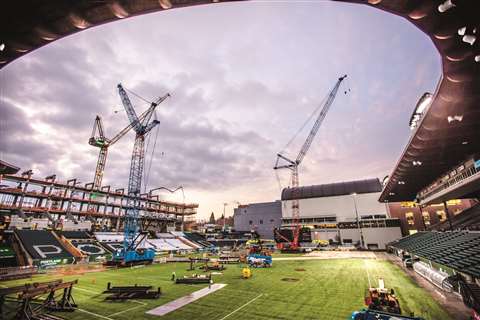 The iconic sports and entertainment facility was originally constructed in 1926 and has played host to all sorts of sporting events, political gatherings, concerts and other events. According to the Portland Timbers website, Providence Park has hosted presidential visits, the NFL’s first overtime game in 1955, decades of professional baseball and an Elvis Presley concert in 1957.

The main goal of the recent renovation project was to bring the capacity to 25,000 seats. Started in 2017, the job involved a lot of lifting challenges.

“The Providence Park Project was a great one for NessCampbell,” said Bill Chapman, estimator and project manager.

NessCampbell crews and cranes have been on and off the jobsite for almost two years.

First off, the company was involved in the start of the project by providing the tower crane erection services. NessCampbell dispatched its Liebherr LTM 1500-8.1 all-terrain crane to erect the Liebherr 542 HC-L tower crane with 134 feet of tower height and 213 feet of jib length. 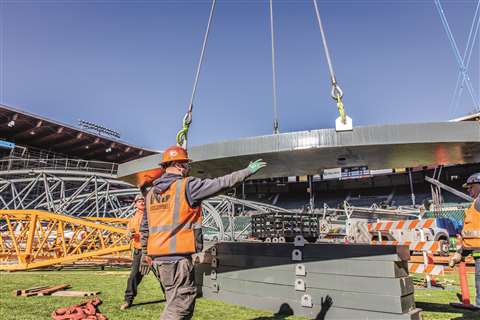 Once the site had made enough progress on the prep work, NessCampbell provided two Manitowoc 16000 crawlers to set the concrete risers for the stairs and stadium seating, as well as the truss components and fill-in iron to tie the truss structure together, as well as tie them into the concrete structure erected by the tower crane, Chapman explained.

Complicating the project, contractor Turner Construction had to engineer and build a bridge to cross the Tanner Creek underground stream.

“The bridge had to be built to withstand the weight of the LTM 1500-8.1 as well as the Manitowoc 16000 that were stationed at the north end of the stadium,” Chapman said.

“The two cranes’ typical working radii were anywhere between 90 to 190 feet,” said Chapman. “Typical lifts were in the 50,000-pound range.” Since the 16000s were in place, they were also used to dismantle the tower crane, Chapman said.

“When the north crane had to offload trucks from Southwest 18th Avenue, the south crane would take over on the tower crane dismantle,” he said. “And then they would swap duties depending on what assistance Turner Construction and the other trades needed throughout the day.”

Chapman said some of the more difficult challenges were entering and exiting the site with the cranes as well as field protection.

“We needed to make sure we didn’t cause any damage to the underlying substructure that will be reused once the stadium renovation is complete,” he said.

The cranes NessCampbell used on the project were chosen based on their capacities, reach and flexibility on boom/jib configurations,” Chapman said.

At any given time, there were four to six NessCampbell employees onsite.

“Our crews, including the tower crane dismantle crew, did an amazing job with limited space and resources available,” Chapman noted.