Mountain Crane commemorates 9/11 with decals on its Liebherr LR1600.

Everyone old enough to remember can recall where they were and what they were doing on the morning of September 11, 2001. That day four commercial airliners were high jacked by terrorists. Two of the planes crashed into the World Trade Center Twin Towers in New York City and one crashed into the Pentagon in Washington D.C. The fourth passenger jet was heading toward Washington D.C. but crashed into a field in Pennsylvania after its passengers stormed the cockpit and tried to overtake the terrorists. The attacks killed 2,996 people, including 343 firefighters and 72 policemen. More than 6,000 were injured. 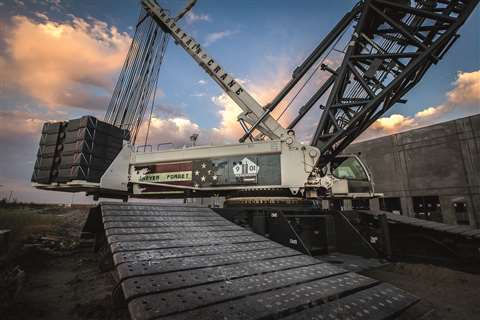 This year Mountain Crane continues to honor the memory of lives lost on September 11, 2001 through commemorative crane decals on the company’s Liebherr LR1600. The crane carries the words “Never Forget” and “9/11 Remember.”

Mountain Crane has made a continual commitment to commemorate the remembrance of this tragic event to honor all the individuals that sacrificed their lives on this dark day in American history and in the resulting wars in Afghanistan and Iraq. Back in 2013, Mountain Crane aided in the sponsorship of a cross country tour of a 9,000-pound chunk of concrete that was once part of the World Trade Centerpiece and that is now a part of the Utah Fallen Warrior Memorial.

Doug Steinfeldt, a long-time crane operator for Mountain Crane, and his wife Jodi, lost their nephew, Specialist Jordan Byrd in Afghanistan. As a medic, Byrd lost his life as he worked to save a fellow wounded solider. Byrd was honored with a Silver Star, the Army’s third highest award for valor.

“We went to Mountain Crane with this project, and asked if they would be interested in getting a piece of the stone from the World Trade Center here for a memorial for the fallen,” said Jodi Steinfeldt. “They were transferring one to Kansas and they had purchased another one to bring to Utah. So Mountain Crane kind of took that on as their own and bought a piece. There’s only 11 pieces of the slurry wall that was saved from the World Trade Center. They got everything together and painted with flags and did an amazing job going and picking up the rock, bringing it across the United States and dropping it different places so that people could come and see.”

According to the Steinfeldts, the use of a crane was all they really were asking for.

But Mountain Crane went above and beyond and made a beautiful memorial in Utah with the stone they brought across the country. The final resting place for the artifact was Fort Douglas Military Museum in Salt Lake City, UT. Mountain Crane has served as a major sponsor of the museum and is involved in a 9/11 ceremony each year. 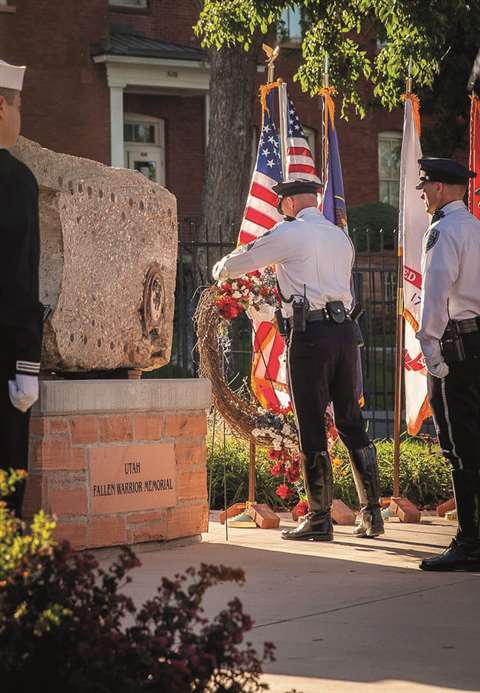 The final resting place for the World Trade Center stone artifact is Fort Douglas Military Museum in Salt Lake City, UT. Mountain Crane has served as a major sponsor of the museum and has been involved in a 9/11 ceremony each year.

This year, Mountain Crane is continuing to honor the memory of lives lost on 9/11 through commemorative crane decals on the company’s Liebherr LR1600.

“We love [the decals] because it’s a way to make sure people always remember,” said Doug Steinfeldt. “As time goes on, people forget. So, for a company to step up and do things like they have done, for our fallen, so people can remember what happened is amazing.”

This month, Mountain Crane honors Jordan Byrd and all of America’s fallen.