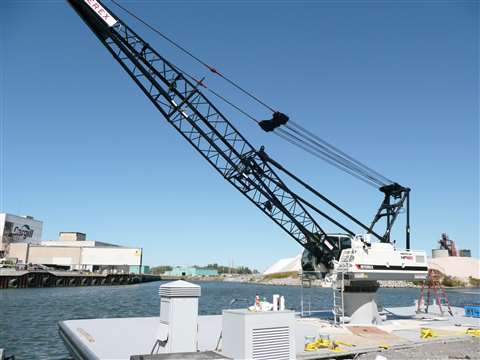 A new Terex barge-mounted crane will be use to help contain ice in Lake Erie.

ALL Erection & Crane Rental Corp., based in Cleveland, Ohio, USA, has been commissioned to erect a barge-mounted pedestal crane for the Lake Erie-Niagara River Ice Boom Operations in Buffalo, New York. The crane will be used to help reduce potential damage to hydroelectric power plants caused by Lake Erie’s inevitable ice build-up during the cold winter months.
The New York Power Authority (NYPA) asked Great Lakes Shipyard, a member of The Great Lakes Group in Cleveland, to fabricate and deliver the new 80-foot by 34-foot pedestal crane barge for the ice boom operation. The shipyard called on ALL Erection & Crane Rental Corp., a company with a fleet also headquartered in Cleveland. ALL has worked for the Great Lake Groups many times, and recently collaborated with Great Lakes on a Lake Erie island ferry project.

The shipyard purchased a new Terex HP80 80-ton capacity pedestal-mounted crane from ALL, the exclusive Terex Cranes dealer in Ohio, Michigan, Pennsylvania and West Virginia. The company trucked the crane and the pedestal from Terex in North Carolina to the Great Lakes Shipyard’s fabrication shop on the Cuyahoga River where the barge was built. There, the 60,000-pound crane body was lifted by a 250-ton assist crane, placed and mounted to the barge, and fully assembled by ALL’s technicians on a specially built pedestal that was custom fabricated by Terex. Then it was delivered across Lake Erie to Buffalo by the Great Lakes Towing Company and put into service on September 10, 2010, according to ALL.
The pedestal crane barge will become a key part of the annual installation and maintenance of the Lake Erie-Niagara River Ice Boom, owned jointly by NYPA and Ontario Power Generation, and in use since 1964, according to the company.

The 8,800-foot-long ice boom is a series of floating steel pontoon strings, each 500 feet long and anchored to the bottom of the lake by steel cables. It spans the mouth of the Niagara River at Lake Erie from Buffalo Harbor to the Canadian shore. The ice boom prevents Lake Erie ice buildup from running into the river, thus reducing the likelihood of large-scale ice blockages that can cause flooding and reduce water flow to NYPA hydroelectric power plant intakes, according to ALL Erection.

The boom is installed in Lake Erie around December 16 and removed in the spring. The process will now be facilitated by the crane barge from Cleveland.