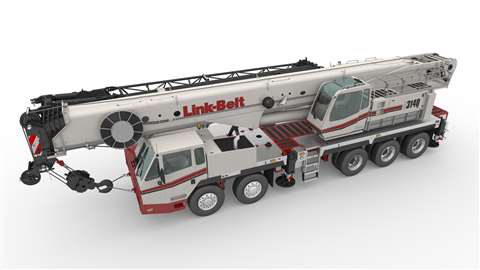 For the 2016 model year, Link-Belt’s 40-ton (120-mt) HTC-3140 and HTC-3140LB hydraulic truck cranes have received feature upgrades along with emissions updates. The 581 horsepower (434kW) carrier engine graduates to EPA 2013 on-highway requirements and 250 horsepower (186kW) upper engine moves up to off-highway Tier 4f/Stage IV, the company said. Both models will maintain the twin engine platform.
The highlight of these upgrades is the addition of side-to-side suspension tilt that can go up to 4 degrees. An auto-lubrication system is a new feature on both the upper and carrier frames and “all temperature” hydraulic oil, lubrication, and anti-freeze packages are now standard. Carrier cameras connected to viewing monitors in the cab offer an operator a rearview when backing up or a view of the right side of the carrier when making a right turn.