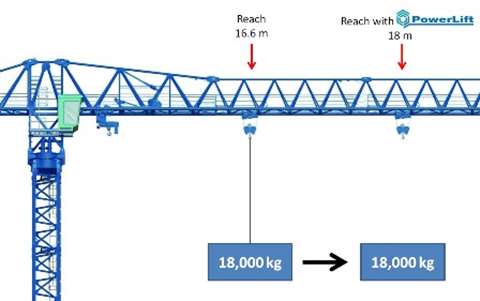 As of January 2012, all Linden Comansa cranes in the series LC500, LC1100, LC1600, LC2100 and LC3000 will incorporate the new PowerLift system, which improves the load chart up to 10 percent with reduced speeds. With the incorporation of this system, the cranes will be able to move the rated load that is indicated in the chart to a major distance (reach).

Linden Comansa's R&D team has developed a system of control and limitation that by means of the automatic reduction of the speed of trolley and hoist, allowing the crane to achieve an extra load up to 10 percent more to do certain tasks.

This system does not allow the crane to have bigger maximum load capacity, but allows it to increase 10 percent the rated load that appears in the load charts up to the maximum load according to the data sheet, in the same way as it allows to displace the same maximum load to major reach.

The PowerLift System is automatic and is easy to use, the company said.