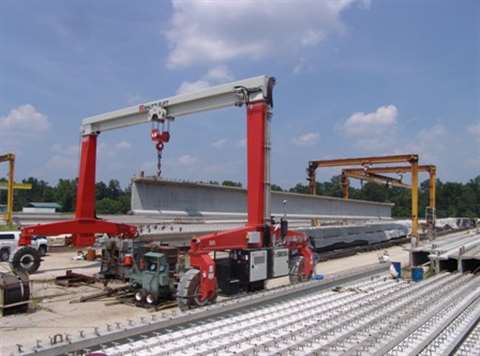 A leader in high-quality, precast and prestressed concrete products, CPI specializes in bridges, commercial buildings, railroads and marina construction. Diversification has been the cornerstone of the company since it was started in 1961. Early work included major industry and government projects such as the structural concrete portions of the Quaker Oats and Procter and Gamble facilities in Jackson, TN. CPI is also known for their prestressed highway beams, and have produced spans in numerous bridge projects and railway bridges in seven states.

"Throughout the industry, what used to be picked with a single spreader bar and a conventional crane is now difficult with the growing length of precast beams," said Shuttlelift's Dan Reinholtz, sales manager. "The SB series cranes are a cost effective way to lift in tandem without investing in additional conventional cranes."

CPI's president Don Thomson is pleased with how the new single-beam gantry crane operates. "We love the versatility of the crane and are finding many more uses for the machine than we initially thought," he said. "The crane is simple to use and we were also impressed with the speed in which it operates."

CPI of Tennessee is using the SB gantry crane for structural picks and to carry concrete buckets and smaller precast concrete elements, all of which are single point picks.

Additional selling points included the wireless remote control, which increase the operator's load visibility, improving operational safety. The remote is laid out in the same format as the backup operator cab controls for an extra measure of efficiency and safety.

"The radio remote control allows the crane operator to assist with the rigging directly," Thomson said.