Whether it’s two cranes working together to place an object or several cranes working in tandem to perform a massive project, multi-crane jobsites can be complicated. 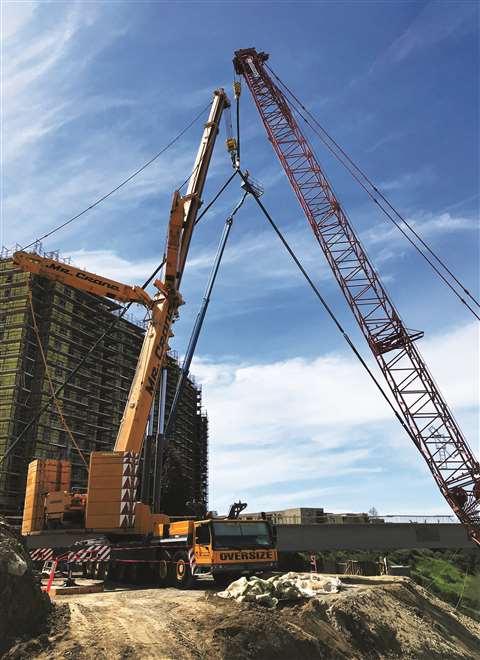 Cranes working in tandem require a team of dedicated professionals who know what they are doing and who are experienced in managing the risk of huge machines lifting huge payloads. ACT polled several companies across North America to tell us about some of their most recent multi-crane projects. We think you will be impressed.

Working for Granite Construction, Orange, CA-based Mr. Crane was tasked with placing a large pedestrian bridge at the University of California San Diego (UCSD) in La Jolla, CA. The Mr. Crane team used a Liebherr LTM1400 and a Manitowoc 16000 to pick and set a total of eight pre-cast concrete bridge girders.

The heaviest girders on the job weighed approximately 186,000 pounds and were roughly 200 feet long. The pedestrian bridge needed to span a large wash that runs through campus and would allow students and faculty to easily commute between medical school buildings and newly constructed residence halls. At over 500 feet long, the bridge consists of three spans. The second and center span represented the largest girders.

The length of the bridge and the distance from the pick location off the truck to the set location on the bridge piers and abutments was significant. Staging the girders on the ground became an extremely difficult operation, due to the terrain and lack of work area.

Each girder required an in-air “hand-off” from the first crane, the Liebherr LTM1400, to the second crane, the Manitowoc 16000. The complex rigging that allowed the girders to be passed between the two cranes was made possible by the use of a triangle lifting plate.

The intricate lift was planned and designed by the Mr. Crane engineering team and successfully executed by Mr. Crane operators and ironworkers. This complex requirement highlights the experience and capabilities of the Mr. Crane team, as one of California’s largest operated and maintained crane providers, the company said. Mr. Crane has set pre-cast girders on every major freeway in southern California.

“We are proud and pleased with the results, but Mr. Crane would not have been successful without the collaborative cooperation and partnership between Granite Construction, General Contractor Hensel Phelps, and Owner UCSD,” said Erin Parker, Mr. Crane project manager. 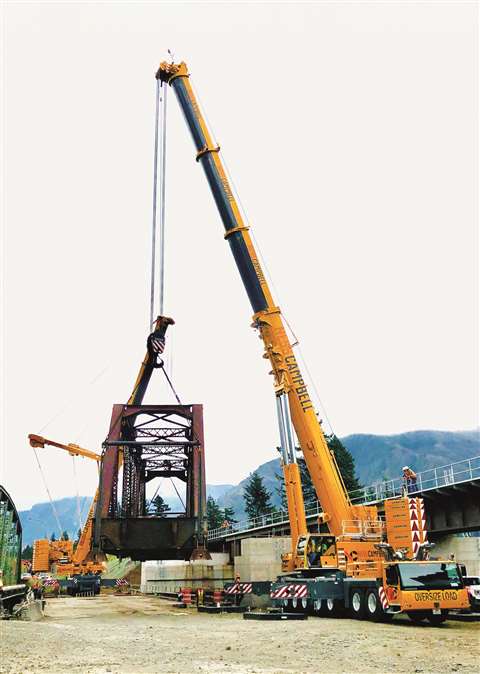 NessCampbell Crane + Rigging was contracted by Hamilton Construction to remove an old trestle bridge in Bonneville, WA. The old bridge was 161 feet long, 22 feet wide and 40 feet tall. It weighed 357,000 pounds. NessCampbell deployed its 600-ton Liebherr LTM 1500 8.1 rigged with 308,000 pounds of counterweight and rigged with 104 feet of main boom with its Y Guy. Shuan Julian operated this unit.

Mike Ballenger operated NessCampbell’s 500-ton Liebherr LTM 1400 7.1, which was rigged with 368,000 pounds of counterweight and rigged with 84 feet of main boom.

NessCampbell Lift Director Jeff Ross and Engineer Drew Alemendi explained that this job was part of the BNSF Railroad improvement work along the Columbia River in Washington and Oregon.

“We had about 40 hours of engineering and lift planning mostly because the 600-ton was set up on a work bridge constructed by Hamilton over the waterway and we had to ensure the structure would hold the crane and the bridge once we set it down so we spent a lot of time engineering the exact location of that crane,” said John Anderson, president, Ness Campbell. “Besides that challenge, the job went really well.”

The NessCampbell team assembled both cranes the day before made the lift the next morning. By the afternoon, the cranes were gone and headed back to the yard. All NessCampbell employees had to have passed the E Rail Safety course and background checks along with the NessCampbell Critical Lift Safety Protocol, Anderson said. Prelift meetings were also held prior to the lift.

“Our Lift Director Jeff Ross planned and directed the lift and was definitely one of the reasons why we were able to perform the lift successfully and safely along with the professional crane crews and riggers,” said Anderson.

Barnhart’s Spokane, WA branch recently completed a four-crane lift of a logging yard gantry crane at a Washington State sawmill. The job required the Barnhart’s six crane operator team to lift the logging crane, which had previously been dismantled by another Barnhart branch a year earlier. The log yard gantry weighed 586,000 pounds and measured 362 feet in length. The crane needed to be lifted to a height of 110 feet.

The logging crane had a challenging center of gravity since one side of the crane had moment connected legs and the drive chain and the other side did not. This required Barnhart’s engineering team to develop a bilateral lifting plan with two cranes accounting for 192,000 pounds of the load and the other two handling 394,000 pounds in weight. The rigging utilized lifting beams placed at the bottom of the logging crane span.

Due to the terrain of the lumber yard, steel mats were a critical part of the set up and rigging of all the cranes, according to Branch Manager Jeremy Shawver. Cranes deployed for this lift included six cranes: two 55-ton capacity Grove GMK 7550s all terrains, and two 300-ton Demag AC 665 all terrains and two 60-ton capacity Grove RT 760Es. The rough terrain cranes were not hooked up to the main load, but they installed the gantry crane braces.

Shawver said the job planning took six months. The four legs of the gantry were spread out and the gantry was laying on the ground, Shawver explained.

“As it was lifted up, the legs collapsed, and when it was at the full height, we had to hoist and insert the leg braces and set in the leg braces,” he said. “Those were pinned off and so then we could release the load, so it was stable. The smaller cranes installed the braces.”

Shawver said Barnhart won the job based on its ability to dispatch six cranes to the site on the exact date requested.

Barnhart had taken the crane down previously in Seattle and then once it was shipped, they performed the assembly and re-erection at the jobsite in LeClede, ID, about 70 miles from the Canadian border. The client was Idaho Forest Group.

“It’s rare in this region to find a company that has enough large cranes to perform this type of lift,” said Shawver. “We used cranes from three different Barnhart branches to accomplish the project. It was only a four-hour job, but it required 38 semi-truckloads to get in to do the job. The challenge was getting the cranes rigged and making sure those six cranes were available that day at 6 a.m.” 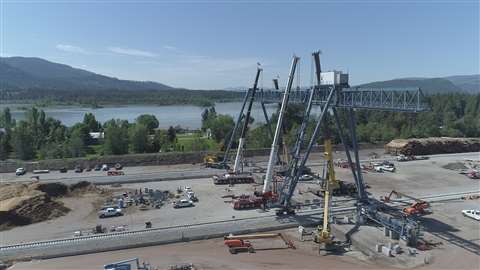 A selection of tower cranes from Bigge Crane & Rigging’s fleet have been working on building of a state-of-the-art campus for a technology company in Northern California’s Silicon Valley.

Four of the cranes are manufactured by Terex Comedil. The CTT 721Bs are configured with heights under hook ranging from 182 to 300 feet and each are rigged with a jib length of 246 feet.

Also on the jobsite are two Potain MD 689s rigged with heights under hook of 177 feet and 224 feet. Both tower cranes have jib lengths of 213 feet. Construction crews are using the cranes to lift and set materials that comprise the massive roof of the structure, a complex web of steel resembling a tent. The tower cranes are projected to be on the jobsite through the winter of 2020. 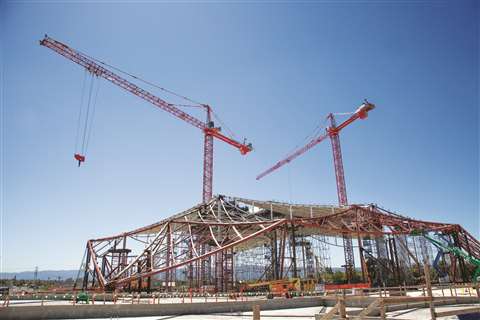 The job was completed without incident in one day. There was a third crane on the job, not owned by W.O. Grubb, that assisted with placing counterweights on the bridge and disassembling the additional support structures on the bridge.

The Grubb team termed this a great job performed by its Major Projects Division with assistance from its in-house engineering team. 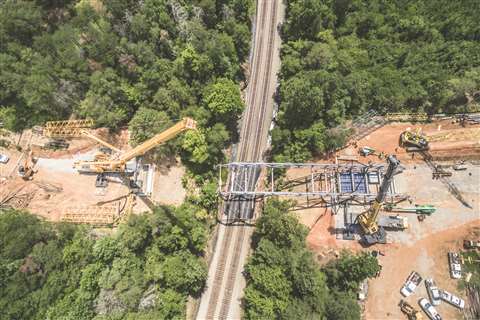