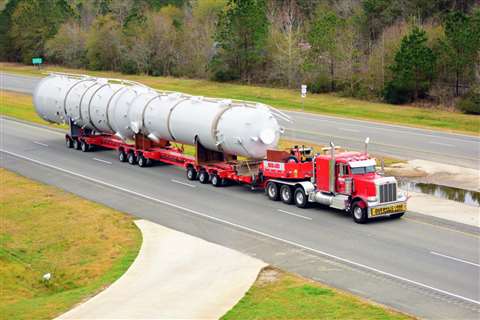 The Faymonville HighwayMax, developed for the North American market, will be on display at Bauma 2016.

Specialized transport systems and trailers manufactured for users in the United States, Canada and Mexico differ greatly from similar products used around the world.

However, many European manufacturers have successfully produced popular transport systems and trailers that are adaptable or specially produced for North America.

American Cranes & Transport has produced its Bauma Show Guide to North American customers of trailers and transport systems geared to their market.

A display by Faymonville will include a CombiMax trailer with 10 axles, an extension beam and a low-bed. Following the modular system logic, 20-vehicle combinations can be put together with the exhibited model.

The Faymonville DualMax will also be on display. Originally developed for the American market, he Dual Max illustrates the lift and shift principle. The DualMax’s rail width can be increased even while loaded.

Faymonville will also show a new SPMT, which is claimed to have the strongest drive axle on the market and intuitive operator guidance.

Goldhofer is not revealing much detail of its Bauma launches, other than that a highlight will be “a kind of auxiliary drive for self-propelled heavy duty modules.” The Goldhofer stand will feature a 500- metric ton capacity Faktor 5 high girder bridge for a customer in Mexico. It will be configured with a PST/SL-E self-propelled module and hydrostatic drive. It is the eighth unit built.

The Scheuerle, Nicolas and Kamag brands of specialized transport systems will appear together on the Tii Group stand. The second generation of the PowerBooster will be shown as well as the Scheuerle-Kamag K25 H 06 PB with 1,000 hp power pack.

Developments in the self-propelled modular transporter (SPMT) category will focus on cost efficiency, versatility, emission-free operation and safety, Tii said. One of the many exhibits will be the Scheuerle InterCombi SPE transporter. There will be a Power Pack Unit type Z390/EU 4 as the drive unit for the hydrostatically driven and electronically steered InterCombi SPE that can be electronically coupled with a classic style SPMT. The proven modular Scheuerle-Kamag K25 H has an additional hydrostatic drive, the company said.