One for all with Mammoet

In the interests of efficiency Mammoet chose to use just one large crane to complete all lifts for an industrial plant expansion project on the Gulf Coast. 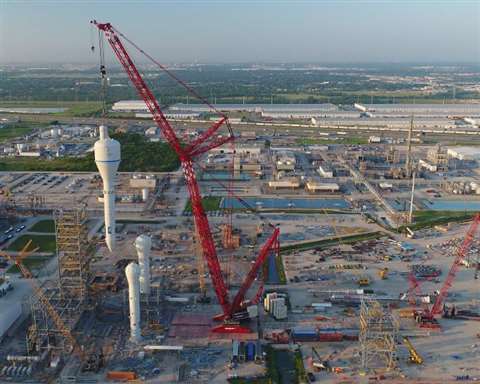 Project completion is due in the first quarter of 2020.

Expansion of the Gulf Coast polypropylene plant will increase production capacity by 450,000 tonnes a year. Analysis of the construction plan and the lifts required led Mammoet to conclude that a 3,000 tonne capacity Liebherr LR 13000 lattice boom crawler crane from its own fleet was the crane for the job. It had to reach more than 160 metres and lift almost 500 tonnes.

July saw completion of the first series of lifts, following which the crane was reconfigured with a luffing jib. The 72 meter luffer was on the end of 96 meters of main boom. Another 16 lifts were made. Heaviest was a 482 tonne purge bin. It was lifted from the support saddles and tailed using one of Mammoet’s 600 tonne capacity Demag CC 2800 lattice crawlers. Next the load was swung through 180 degrees and placed in an existing housing. The lift was made inside the scheduled three-hour window. Several of the lifts were made with the crane set at almost 129 m radius.

Eddie Ramos, project manager, commented, “Mammoet safely installed all major equipment using only the LR 13000. By applying different boom configurations to extend its reach, the crane could carry out the lifts from one location,” he said. “This, in conjunction with the knowledgeable crew on site, saved time and minimised disruption to surrounding works, ultimately helping to meet the client’s schedule.”

Project completion is due in the first quarter of 2020.