One for the Gipper 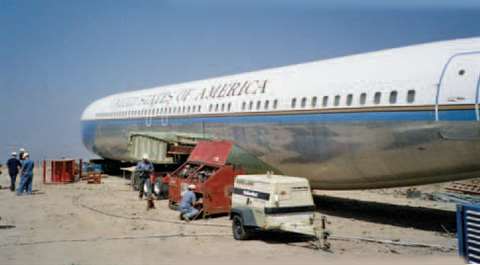 Dismantling the aircraft for transport required a bolt by bolt effort, as did the reassembly

Last month, Larry Beard, CEO of Coast Machinery Movers, gave a compelling presentation about the effort to install one of the most spectacular exhibits at the Ronald W Reagan Presidential Library. His speech centered on the task by Coast, Boeing Aircraft Co. and other organizations to install the retired Air Force One jetliner as a display in the pavilion of the library in Simi Valley, CA.

Beard, who founded Coast Machinery Movers in 1970, outlined for his audience every detail of the two-year time span required to complete the project. Dubbed Operation Homeward Bound, Beard took a personal interest in the project for a number of reasons, chief among them his respect for President Reagan and the historical significance of the jetliner. It had been Reagan's wish to retire the plane, which transported him on 211 missions, to his library.

“During its tenure with the United States Air Force, the plane served seven US presidents and many other dignitaries,” he says.

“Perhaps its greatest legacy is that it was the plane that carried President Reagan to Berlin in 1987 where he urged Soviet General Secretary Mikhail Gorbachev to tear down the Berlin wall.”

Beard explains that the jet was retired from active duty in 2001 and after several years of various groups trying to decide what to do with the plane a proposal was made to make it part of the permanent display and a centerpiece of the planned pavilion at the Reagan library.

By January 2003 the plan was in place with Boeing overseeing the disassembly of the plane for its 100-mile transport by Coast to the library. Boeing had worked previously with Coast on a project to reposition a DC-8 aircraft at a museum in Los Angeles.

For more than six months, Coast assisted Boeing with the removal of the plane's wings and tail section, providing specialized lifting equipment in the disassembly, which was a bolt by bolt effort, Beard says.

When disassembled, Beard and his team devised a plan for moving the 145.5 foot long and 14.21 foot tall fuselage, which weighed about 50,000 pounds without the landing gear. The company also designed a plan for moving the wings, engines and related components. Each half wing weighed 18,400 pounds and is some 69 feet long by some 35 feet wide. The inboard engine weighed 7,100 pounds per side and the outboard engine weighed 7,000 pounds per side.

Naysayers said it could not be done, to transport the huge fuselage over the road on a route that would involve surface streets and four California freeways. But Beard wasn't discouraged.

Working with the California Highway Patrol, Coast determined the route and the requirements for moving the airplane. The route was test driven several times using height sticks to test for overhead height and side clearance. Finally on a warm summer night, the Coast Machinery Movers team set out on the journey with some 15 highway patrol escorts in tow. Trucks hauling the wings and smaller components left first, with the fuselage the last of the convoy.

The fuselage was transported on two heavy duty, 50,000 pound capacity, low profile dollies, similar to those used to move houses. Coast engineered a special bracing system that was mounted on the airplane where the landing gear would normally be and onto the dollies. The rear dolly was also fitted with a counterweight. Using a Kenworth tractor, the fuselage was driven out of the airport and followed a route that included surface streets, onto the I-10 freeway, to the 1-15 freeway, to the 210 freeway, to the 118 freeway and back onto surface streets to the entrance to the library.

The journey was uneventful, with the exception of a flat tire on one of the dollies. But ever thinking, Beard says they had even brought along a commercial roadside repair service.

At one point in the transport, the fuselage was lowered to within 18 inches of the ground to clear one overpass. “Our competition had quoted five days for the transport but we were at the bottom of the hill at the library in five hours,”

On reaching the bottom of the hill, Beard says the real challenge started, with the driver working to drive up the hill. “It wasn't so much a big problem, it just took a lot of time to keep backing up and shifting the load so we could get around the corners to jockey it up the hill.”

At the top of the hill the fuselage and its components were placed in storage for several more months while the pavilion area was constructed. During this time Coast again worked with Boeing, devising a plan to reassemble the plane and lift and secure it atop several columns in the pavilion area.

Throughout 2004 and 2005, Coast's staff worked with Boeing to move the jet and its components into the building and reassemble the aircraft. Coast did all of the heavy lifting required with the reassembly. At last it was time to hoist the plane up to its placement on the pedestals.

Coast again sought the expertise of Boeing to determine stress points on the plane and where they could jack and where they could pick. Coast's plan involved the construction of a special hydraulic ramp to roll in the nose gear. Using the hydraulic platform, a Riggers Manufacturing gantry system, and two 50-ton Tri Lifters, the plane was lifted and secured. That effort took more than a month to accomplish.

Beard remembers one special moment when he was on site, one day last summer, when the project was almost complete. He looked up to the mezzanine area and saw former First Lady Nancy Reagan watching the goings on below. She smiled and waved and gave the thumbs up, while he yelled up, “This one's for the Gipper!”