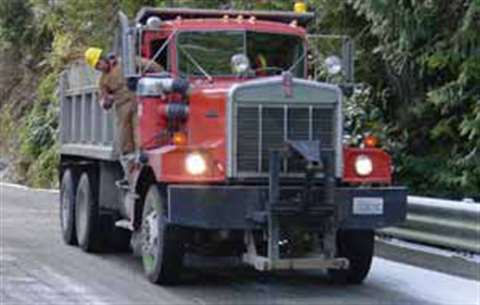 Most specialized transporters will tell you that a “bottleneck” usually refers to a weight-restricted bridge that is on their preferred haul route for an overload.

There are all kinds of reasons why a permit load may not be allowed to cross a bridge but, usually, they are related to quantities that structural engineers refer to as bending moment or shear in the girder or deck members. In some cases the capacity of the foundation may control what is called the load rating.

When a hauler applies for a permit from the bridge owner, the owner's engineer will use a set of guidelines for estimating how the axle loads will be distributed across the structure. The level of detail used for these procedures will vary from agency to agency, but in all cases, when there are any unknowns, conservative assumptions are used since the emphasis is always on safety.

If the weight and configuration of the permit load are at or above the calculated weight limit for the bridge, costly rerouting may be required by the agency. However, if it is possible to quantify some of the unknowns and a reliable factor of safety can still be demonstrated, the bridge owner may allow the permit load to cross the struture.

One effective way to estimate many of these unknowns is to run what is called a load test with a standard dump truck and to use the results to calibrate a computer model of the bridge. If this is completed prior to the passage of the overload, the computer model can then be used to predict what the effects of the overload will be.

An efficient load testing approach has been developed and refined over the last 20 years, and this process has become a routine and relatively simple operation as follows:

2) Run a loaded dump truck across the bridge several times at about 5 miles per hour. (Time: about 30 minutes to one hour)

5) If required, record data during passage of overload to verify the predictions and/or monitor for possible damage.

There are several variations on these procedures depending on testing timeframes, type and condition of the bridge, budgets, and even political considerations. All types of bridges can be tested using this technique, including reinforced concrete, steel girder, pre-stressed concrete, timber and fiber-reinforced polymer (FRP) structures.

A unique aspect of this approach is the use of a specialized structural testing system (STS). The sensors, electronics, and software are all configured so that a two-person crew can usually complete the field test procedures in one day. Extra time may be required for complex structures or if access is difficult. To compliment the fast field testing capabilities, the software and procedures for the data analysis has also been optimized in an effort to speed up the process. The combined effect is to significantly reduce the costs involved for this type of testing.

Furthermore, once a test has been completed on a particular bridge, the computer model can be used for many years in the future for predicting ratings for all types of permit loads with the only assumption being that little or no structural deterioration has occurred.

Situations where such a test can be most useful are when:

There is concern that the proposed load will produce an excessive mid-span bending moment in the bridge.

A bottleneck bridge is causing many loads to be re-routed, causing significant cost increases and delays.

There is concern that because the load is so heavy, it may cause some type of damage during its passage. Monitoring bridge responses during the overload passage can protect both the hauler and the owner by ensuring that specific limits have or have not been exceeded.

A bridge owner or agency would like to investigate their own overload permitting process by comparing their predictions to actual responses.

Often, the first question that comes to mind is,“How can you possibly predict what is going to happen with a 500 ton load when tests were run with only a 25 ton dump truck?” As with all structures, bridges are designed to reliably “bounce back” after being loaded, but only up to their “elastic limit.” As long as the stresses remain below this level, the computer model that has been calibrated with field data is accurate for predicting the effects of a load with just about any combination of weights and axle spacings. This “linear response” has been verified many times with all types of vehicles including cranes, military haulers, specialized transport vehicles, oversized rail cars (railroad bridges), and even large forklifts.

Most overload tests have shown that crawler-type configurations with eight to ten wheels per axle can distribute the load 10 to 15% better laterally when compared to using traditional estimates. Also, data recorded during overload passages has proven to be an excellent indicator of how well the gross weight is distributed longitudinally over the groups of axles.

It is very important to note that it is not always guaranteed that a bridge's load rating will increase due to this process - they can sometimes decrease or maybe remain about the same. An example of where a load test may not be useful is an older reinforced concrete structure that is rated deficient in shear, since capacity requirements have changed in updated design codes.

It should also be noted that the procedures described here are not restricted to just testing bridges. They have been used successfully to test crane components and even the loads themselves as they are being transported. For example, several very long bridge beams had to be transported for a construction project and there was a need to monitor the stress levels that they would experience during the 100 mile haul. To accomplish this, sensors were installed on the girders at the casting yard prior to being loaded on the transport vehicle. Next, the STS system was configured to be controlled from the vehicle's cab, meaning data could then be recorded at various stages of transport including loading and unloading, moving at highway speed, and as the vehicle negotiated tight turns.

To conclude, there are all types of applications where a live load test might provide useful results, and specialized equipment is available in order to make it a cost-effective option. But it is very important to remember that while testing can reduce much of the uncertainty, the final recommendations will always conform to safety criteria outlined in design codes.