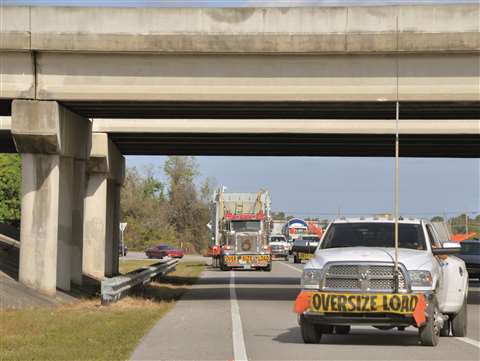 When it comes to sharing the roadways, you can thank dutiful pilot car escorts for maintaining a safer driving environment for everyone from huge trailers to Teslas. With oversized vehicle accidents costing companies hundreds of thousands, and in some cases millions of dollars, pilot cars affect heavy haul safety on many fronts.

Pilot cars are a small but mighty industry sector, and the work they do requires experience, skill and diligence. Let’s take a look at what the future holds for pilot car businesses. “The pilot car industry is dealing with many of the same issues trucking companies have been concerned with,” said Wes Mollno, president of WCS Permits. “The stagnant oil and gas industry has negatively affected the pilot car market. 2016 being an election year also seemed to cause some additional struggles. On a positive note, superload travel seemed to remain strong. Based on what we have been hearing, 2017 should be a strong year throughout the industry. OPEC’s deal to cut production of crude oil and the post-election year rebound should lead the way to a productive 2017.”However, this isn’t to say the upward rise hasn’t been a tumultuous journey. “I think the biggest challenge is getting everybody on the same page from the trucking standpoint to the pilot operator standpoint, even to state government and federal government- realizing that we all work together for the same cause when these loads move down the highway,” said Michael (Mike) Morgan, president of Pit Row Services. According to Mollno, route surveying and high pole piloting also continues to be a problem. More specifically, some pilot car companies offer these services without having the proper experience or knowledge.  For this reason, pilot car certification has become a hot topic.“There are no standards amongst state agencies as to how a survey should be prepared or what should be included within the survey,” he said. “WCS places requirements on pilots and surveyors, but other company’s requirements may be different or may not exist at all.  The general lack of uniformity is the biggest challenge in the pilot car industry today.”Prompt payersFreddie Albrecht, co-owner of State Line Pilot Car & Permit Service, said one of the biggest challenges in the industry today is finding companies or dispatchers that pay in a timely manner.“Most brokers start off with a limited source of funds so when they are not paid by the companies they are unable to compensate the escorts for the work performed,” said Albrecht. “The new brokers are less familiar with the companies they deal with and that makes them an easy target for less than honest trucking companies.”Those interviewed for this article have come to the consensus that the lack of standardization and certification within the industry is a problem. Advocating pilot car certification could solve a host of problems.  “Pilot car certification needs to happen,” said Mollno. “The ability to have uniformity with regards to insurance requirements, equipment, signage and lighting would be of great benefit. Additionally, some basic training in flagging operations – what a truck driver can see, what the truck driver requires of a pilot during movement and what to do in an emergency, would be of great benefit to the pilot industry, trucking industry, as well as the travelling public.”Mollno envisions a pilot car certification with two levels. “The first would allow a pilot to provide chase car/lead car operations and the second would allow high pole usage and surveying,” he said. “The certification needs to be broad and not designed around one segment of our industry.  Every pilot should not be required to understand how a 400-foot long dual lane superload steers.  If we don’t over complicate the process, I believe it can and will come to fruition. When? I wish I could say.” Morgan also spoke to his belief in the substantial value of the certification program. Citing the 2013 Skagit River bridge collapse as a factor in bringing back to life the necessity of certification, he believes it is a core competency. However, it shouldn’t just end with certification, without the opportunity for hands-on experience.

“I would love to move a step ahead of that and get some kind of practical experience or teaching in that process of certification,” said Morgan. “I think the states are scared, they don’t want to make any more laws or any more regulations and we’re over regulated as it is. But in this particular instance, I honestly believe that certification is going to be the number on factor in the pilot car industry here in the very near future.”Major investmentAs far as larger transport companies forming their own escort divisions, this could be beneficial, – stimulating the job market and increasing communication within the industry.

“The company has to supply all equipment and drivers, which is a major investment, and requires a [really] steady escort requirement on a daily basis much as in the mobile home industry,” said Albrecht. “They match drivers and escorts that work well together and do well. The companies that don’t have a heavy need for escorts find it much more viable to hire independent escorts when needed. Social media has brought this industry into the next phase by making it easier to communicate and educate each other about the good and bad of this industry. The goal for all of us is to make our moves as safely as possible for all, including the public.”Morgan said that he is actually starting to see some smaller companies that have employees they have sent through certification, and done it the right way. “They always have them at their disposal, and they can always make sure they are trained,” said Morgan. “They can carry the proper insurance and do everything right, yet, I think it would be a very smart move for the companies that have enough business to have their own pilot cars serve as pilot cars for their loads. If nothing else, if they need more, at least send one of their folks out with some pilot cars they may have to contract out to kind of keep things in line. And I don’t think it’s going to hurt the pilot car industry at all. It may create some jobs for some of the pilot car operators out here that doesn’t have the knowledge or the ability to afford the insurance or the knowledge to run their own business. It may create job opportunities for them as well.”However in stark contrast, Mollno believes that most companies will not see the long-term benefit to large scale pilot operating.“The problem is logistics,” said Mollno. “Pilot cars are not needed on all oversize loads and at times, only on certain highways or in certain states.  Unless the trucking company’s operations are isolated to a small geographic area, having the pilot in the right place at the right time is a problem. A pilot traveling long distance to escort a load is neither time nor cost effective.  As a result, I do not see pilot car operations being beneficial to the majority of interstate haulers and in this regard, I do not foresee drastic change within the pilot industry.”