Seattle’s Suquamish ferry was ceremoniously christened with champagne and Native American blessings in January 2018 by the Washington State Department of Transportation. But before its first official voyage, the new 144-car, 1,500-passenger capacity vessel had already experienced an arduous journey.

In August of 2017, OXBO Mega Transport Solutions performed an incredible scope of work that greatly expedited the building of the ferry. The hull of the vessel, built in Seattle, measured 322 feet 6 inches long, 82 feet wide and weighed 4,235,000 pounds. The upper superstructure, measuring 280 feet long, 80-feet wide and weighing 3,150,000 pounds, was built 30 miles away in Tacoma, WA. 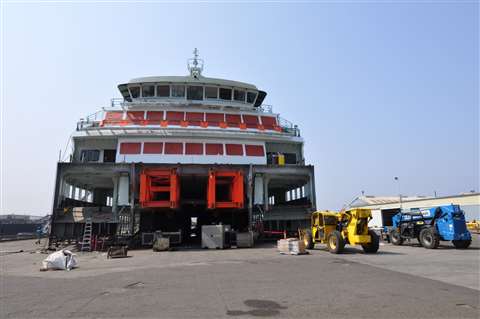 The full weight of the hull and the super structure of the Suquamish ferry was 7,385,000 pounds.

would be put in a second dry dock and lifted out of the water. The two dry docks would be tied together and the superstructure rolled and installed onto the hull, mating into one vessel.

“The superstructure would be set on the hull within 1/32 of an inch,” said Settle. “The time allotted was 72 hours to complete all three moves.”

Designed to sit on top of the hull, the superstructure was built without a floor, making it extremely unstable once it was lifted off the foundation it was built on. The OXBO engineering team’s solution was to place sections of gantry trusses

and a network of cross beams on top of a 72-line Goldhofer PST-SLE. Once the support structure was erected, the trusses and beams were driven by the self-propelled Goldhofers under the super structure. The cross beams were purposely left six inches short of being completely tight, leaving three inches on either side of the support structure to drive it into place. Once in place, custom shim packs provided a tight fit. Twelve 150-metric ton climbing jacks lifted the load an additional 12 inches to provide clearance of several obstacles on the barge.

Built in the World War II era, the old wooden dock was another challenge. After inspection, OXBO concluded there was one location where the pilings were adequate to hold the load. The 90-degree steering of the Goldhofers allowed the side shifting of the vessel onto a network of crane mats and steel beams placed over the approved section of dock. This placed the Goldhofers near the edge of the dock and left the vessel cantilevered over the side of the dock over 25 feet. Once the side shift was completed the steering direction was shifted and the vessel was ready to roll onto the barge. Necessary ballasting offset a 10-foot tide change. 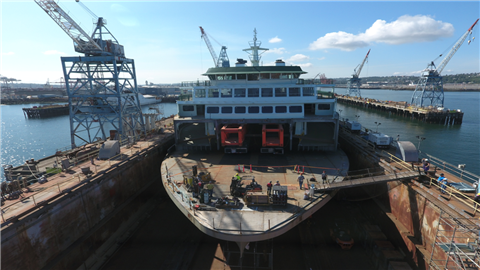 The barge loadout was completed in four hours. In another four hours, OXBO crews had lashed the superstructure and achieved the launch go-ahead from the marine warranty surveyor.

Meanwhile, in Seattle the second OXBO crew was working on the hull, which was built inside a building and would need to cross two 8-foot wide finger piers to get to the dry dock. The small width and tight space was overcome by using 48 dollies in two files that were hydraulically connected in three zones.

Six of the dollies were self-propelled, allowing for remote control operation. The hull was loaded out in six hours.Once the two pieces were in the same area, the two dry docks were placed end to end and ballasted to the correct height for the transfer of the load. An engineered ramping system connected the barge to the ferry hull. The superstructure was then unlashed from the barge.

The ballasting operation matched the speeds of the Goldhofers so the transfer of the superstructure over the hull took fewer than 90 minutes. The superstructure was set in its exact location within minutes of the plumb bob being set by the owner. Once in place, the shim packs were pulled from the steel beams and the support system was safely driven out from under the load and onto the barge in the same eight-hour shift.