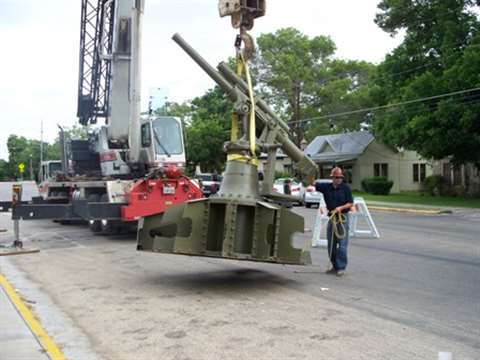 An artillery gun being lifted by a Link-Belt truck crane

These are among the feelings one experiences when viewing the exhibits at the newly expanded George H. W. Bush Gallery at the National Museum of the Pacific War in Fredericksburg, TX.

Fittingly, the museum will officially open the newly expanded gallery on December 7, 2009, 68 years after the attack on Pearl Harbor. President George H.W. Bush and Commandant of the Marine Corps General James T. Conway will be the honored guests at the re-opening ceremony.

For several years, the museum has stored in a local warehouse many rare World War II artifacts that it didn't have room to display. A few years back funding was secured to expand the Bush Gallery at the museum, and last spring the 43,000-square-foot expansion was completed and ready for the new exhibit construction to begin.

C. Young & Company, based in Austin, TX, was commissioned to handle the rigging and hauling of the artifacts from the warehouse to the new gallery just down the road.

The company took the task very seriously, considering the job an honor and patriotic duty. "Before we started the job I asked the museum curator, for insurance purposes, what kind of value we were looking at for these artifacts," says Carl Young, owner of the company. "He said, ‘priceless.' Our insurance agent laughed at that."

Young says the company secured a $5 million umbrella to move the planes, submarine and other artifacts, including a wrecked Japanese bomber, the centerpiece of one of the museum's dioramas. "We moved a wrecked plane, but it was a special wreck."

From April to August 2009, C. Young & Company crews led by millwright foreman Ricky Autry journeyed to Fredericksburg to engineer, rig and haul the artifacts from the warehouse to the museum. Each exhibit was carefully designed for complete authenticity, Young says.

The first relic moved was a 1941 "Mighty Wind" Kawinishi N1K Kyofu Japanese float fighter plane, which was code named "Rex" by Allied forces, and one of only three remaining in the world, according to Mike Donohue, OHST, WSO/CSE, CHST, and EHS director for C. Young & Company. The plane is a predecessor to the wheeled version known as the "George," and had a maximum take-off weight of 8,184 lbs.

The plane was carefully disassembled and moved from the warehouse/barn using the 7.5 ton capacity Hyster forklift, with each component nestled onto cribbing and secured for the ride to the museum. Once at the museum the plane was reassembled and secured in an exhibit that depicts the fighter flying. Synthetic slings and ropes around the fuselage were used to delicately lift the plane in place.

Next came the rigging, restoration and relocation of a 1939 Admiral's Barge, which was used by flag officers for harbor transport, including ship to ship and ship to land operations. This is a reproduction of the barge used by Admiral Nimitz during his time at Pearl Harbor.

The vessel is 6-feet wide and 32-feet long and weighs about 24,000 pounds. Donohue says they initially planned to move the vessel with a crane, but when the curator said they would need a cradle for the boat, C. Young & Company offered to custom fabricate a museum quality base and install it.

"That solved our rigging problems," says Donohue. "We picked it up using our 18-ton capacity forklift."

Crews also rigged and relocated a 1936 Aichi D3A carrier-based Japanese dive bomber, which was code named "Val" by the Allies. "It's the last one known to be in existence," says Donohue. "It had been declared obsolete in 1939 by the Japanese but they used it throughout the war. It had a take-off weight of 8,047 pounds."

What made moving the plane particularly challenging was the confined space in which it was stored and the fact that it was crashed. That's right, crashed.

"It appeared to be a bombed out piece of junk," says Donohue. "It's a destroyed airplane that was bombed on a remote airfield in the Pacific. The diorama is the recreation of the scene from a hand-drawn field note from an Allied soldier of how they found the plane when they came upon it. It's got the tail in the air."

Young says that special care was taken with the fragile relics. "We didn't want to wreck a wreck," jokes Young. "Even though the fighter plane was crashed and it was being used in a crash scene exhibit, the guy who owned it knew every scratch, dent and bullet hole in the plane."

Among the largest items moved was an Allied M3 Stuart tank. The tank and a Japanese artillery gun were used in November 1942 at the "Battle for Buna Village," which occurred on the island of Papau New Guinea.

The Allied M3 Stuart tank was lifted using a Link-Belt truck crane rented locally. Donohue says the tank lost the battle but the museum curator was proud of the fact that they have two pieces of war artifacts that actually fought against each other.

"They have the tank and they have the Japanese artillery gun that blew the tank up," says Donohue. "It's an incredible exhibit."

The 1938 Kohyoteki Class A Midget Submarine # HA-19 was one of five launched during the actual attack on Pearl Harbor. It is 80-feet long and 7 feet in diameter, weighs 46 tons submerged and was armed with two type 97 torpedoes.

This particular vessel ran aground on the coast of Oahu and the sub pilot was the first known Japanese POW. Donohue says the submarine is featured in the "Myths of Pearl Harbor" program on the History Channel. C. Young crews used its Lift Systems Mini-Jack gantries to rig the sub, move and relocate it to another location inside the museum.

Crews also rigged and relocated the "Fat Man" atomic bomb casing, which weighed 10,200 pounds. According to Donohue, several atom bomb casings were made for the war, and this one would have been dropped over Japan, had it been needed.

Young and Donohue agreed that the toughest rigging project was the float plane. "It was very complex in scope and could not have possible without the assistance of the museum personnel" says Young. "It was really fragile."

But then again, every piece of equipment was fragile when its spectacular history is considered.

Safety was also a huge element of the project, Donohue says, "By company policy, weekly safety meetings and safety audits were conducted throughout the duration of the job to ensure a safe and healthful worksite. There were zero incidents and zero injuries. Rigging plans were generated and reviewed prior to moving any of the larger and delicate exhibits."

For more information about the National Museum of the Pacific War, visit www.nimitz-museum.org