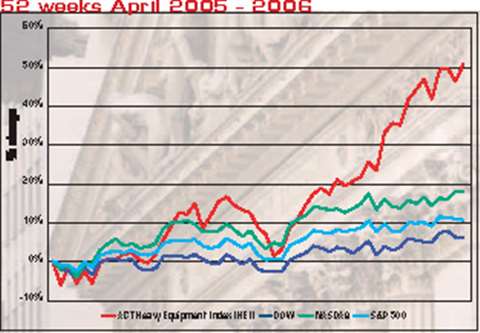 After a steady and reasonably consistent rally over the last five months, share price rises slowed in late March and much of April. The key issue remains the price of oil, which continues to rise on the back of political tension over Iran's Uranium enrichment program.

Over the last two years or so there has been a clear relationship between the price of oil and the US stock markets, with any increase in the cost of &black gold' pushing stocks lower. This was certainly evident in late March to mid-April, with oil creeping back up towards the US$ 70 per barrel mark.

It is a worrying development. The last time oil went this high was during last summer's hurricane season. Of course everyone hopes another Katrina doesn't devastate the Gulf of Mexico again this summer, but it would be foolish not to expect hurricanes, and for them not to disrupt supply.

But despite the persistent oil problem, share prices are offering pretty good returns. The last 12 months has seen the Dow, the most subdued of the mainstream indexes, gain 6.01%. This may not sound like much, but this is a better return than 10 year Treasury Bills, (T-Bills) for example, which are struggling to return a 5% yield at the moment. More impressive still have been the gains of the S&P 500 (10.57%) and the NASDAQ (17.72%) over the same 12 month period.

But the heavy equipment sector has been head and shoulders above these mainstream indexes. Indexes, the current period growth has seen better returns on average than the more widely quoted benchmarks.

The key factors for crane and construction equipment manufacturers have been strong results and an up-beat outlook. Results for 2005 showed sales and profit growth across the board, and as yet there are no signs of the downturn in demand that some predicted for this year.

If anything, the market for construction equipment is growing against expectations. A guidance note from Manitowoc issued in late March said the company expected first quarter and full-year earnings to be at the top of analysts' expectations. The company expects earnings per share to be between US$ 3.75 to US$ 4.00 for the full year, up from the previous guidance of US$ 3.30 to US$ 3.60, based on stronger than expected demand for cranes.

There will, of course, come a point where the market turns, but with snippets of good news like this, share prices should at least hold their ground, if not improve further in the short term. The crunch may still come later this year, if there are early signs of a downturn in order backlog numbers and, of course, there is still the potential for rising oil prices to erode any gains.