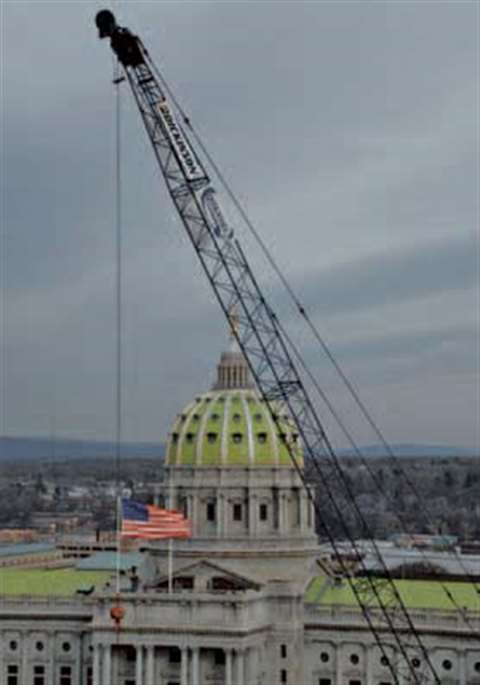 In the shadow of the capitol building, the Link-Belt 218HSL works on a parking garage in downtown Harrisburg, PA. On rent from I.B. Dickinson and Sons, the crane is working in a very tight space in an

In the age of prefabrication and pre-cast concrete lift-panel buildings, a new 12-story, 755-vehicle parking garage under construction in downtown Harrisburg, PA is a bit of an anomaly. Known as the South and Spring Street Parking Garage, the project is primarily a cast-in-place structure with the foundation and lower foor construction relying on pumped concrete placement. The columns and horizontal box beams on the upper floors are all being placed using the tried-and-proven crane and bucket technology.

The project is difficult for many reasons, not the least of those being a severe limitation of space, with no room for on-site storage - not even a lay-down area to shake out materials. From the beginning, the space limitations on the site have been the primary challenge, preventing the use, delivery and storage of pre-cast concrete panels. The requirement for the type of crane needed was brought about by the uniqueness of the type of structure being built and the space problems.

Ned Gilger, project superintendent for Performance Crane Services, says, “Trafic flow, including twice-a-day rush hours precludes our bringing in a series of trailers with pre-cast concrete panels. There simply is no space to park them, even on a temporary basis. And just bringing in ready-mix concrete trucks, one at a time to the concrete pump, is a logistical nightmare.”

The consensus has been that if a contractor had to design a crane specifically for the job, then Link-Belt has done so, says Gilger. The 218HSL, in the lufier configuration, is a compact, maneuverable machine with a small footprint, stability, reach and lift. To cope with space limitations and crane capacity, the 218HSL has 84,940 pounds of counterweight, including 11,100 pounds of sidetrack counterweight on each track.

Some 10,000 cubic yards of cast-in-place concrete will be required for the overall project. The majority of this is a 5,000 psi mix with a seven-day cure time. The exception is that the post tensioning for all the foors must be completed within the first 96 hours of the pour. Concrete is being furnished by Pennsylvania Supply of Harrisburg, and is being trucked to the site on a carefully scheduled timeframe to prevent a trafic jam in the downtown area.

Outfitted with a 130 foot main boom and a 140 foot luffing jib, the Link-Belt 218HSl uses a 1 cubic yard GarBro bucket for the bucket pours. The crane is sitting on mats to level the surface where it travels.

“It was imperative that the crane have a level surface for the limited area of travel available to it,” says Gary Snyder, construction manager on the site. “For this we opted to bring in special three inch thick, lightweight Dura Base composite mats manufactured by The Loma Co., of Carencro, LA, rather than use the heavier, more massive, conventional timber mats. We also added a layer of stone dust under the mats and the results have worked well.”

“The crane is outfitted in the lufier configuration because of the garage's unique placement,” says Jim Kellum, project superintendent for Pyramid Construction. “It is essentially an 'infill' structure being built on a vacant space surrounded by other high-rise structures. Space limitations ruled out the use of a larger conventional crane or a fixed-mount tower crane.”

Fifteen foot wide alleys are adjacent to the new building, which is in the shadow of the state capitol building. The parking structure is also situated over Spring Street, which is a garage entrance and exit.

Beyond the site limitations, weather has played a role in this project. The job began in April of last year and completion is scheduled for mid summer 2007. The schedule only allows for a few snow days, says Snyder. “Since we are doing the bulk of our construction during the winter months, ambient temperature is always a consideration and with cast-in-place concrete pours, winter cures will be a problem,” he says. “We'll have to tent the pour and heat it during the process. Once the pour is finished, we will employ a chemical cure to complete the job.”

Due to the crane's configuration, cold windshield is another significant consideration. Strong gusty winter winds whip through the alleys like a wind tunnel, Snyder says. “We can only have the boom in the air when the winds are less than 25 miles an hour,” he explains. “To cope with this limitation, we have installed a Hirschman PRS-80EZ wireless anemometer wind speed sensor with an in-cab readout. The transmitter unit is mounted on the knuckle between the vertical mast and the lufier boom. We have already encountered this situation, and that is when you know for sure that you have a skilled operator. When he can safely lower the mast and boom without damage when a high wind suddenly whips up, as our operator Joe Mihalik did, it's a very comforting feeling.”

Mihalik says that such technology on cranes requires a new type of operator. “While it is true that we still have the older printed capacity load charts, the computers have significantly reduced our absolute dependence on them,” he says. “The new versions simply will not let you override them, assuming that you were foolish enough even to try. These are second- and third-generation computers, much advanced and far more dependable than the first computers that appeared in cranes. Don't misunderstand me; we still refer to the load charts, especially in the planning stages. But we are in a totally difierent world today and Link-Belt has been at the forefront of this.”

On the project the 218HSL is also used to “fly” the plywood forms between foors before and after the concrete is cured and the forms are stripped by the carpenters. The largest are 56 by four feet square box beam forms weighing 7,600 pounds each. The heaviest single pick (lift), at more than 10,000 pounds, will be the pre-cast concrete stair sections.

During one major lift of four 20 by eight foot plywood panel forms with 12 inch wood braces, the 218HSL was lifting about 5,000 pounds at that time. The tower boom was set at 80 degrees with the lufier at 45 degrees. It set the forms at a 130 foot radius at the opposite end of the garage from the crane.

The crane is on rent from I. B. Dickinson and Sons based in Reading, PA. Dickinson is also accountable for performing the factory specified routine hourly service on the crane.

Serving Central and Eastern Pennsylvania, Dickinson was founded by Irvin Dickinson 58 years ago. Today, the company is run by his son, Don Dickinson, who's son Jeremy Dickinson is also involved in the business, making it a three-generation family-run company. “The smallest rental machine that we have in our inventory is a six ton boom truck and our largest is a 300 ton capacity hydraulic crane,” says Don Dickinson.

The way this 218 HSL crane is set up gives the contractor both the vertical height and horizontal reach that is needed, Don Dickinson says. “It acts like a fat top tower crane without the logistical problems of putting down a base foundation which would encounter a whole mess of underground utility lines,” he explains. “Verizon Communications has a tall tower in an adjacent building which also might interfere with a tower crane.”

“When the determination was made to go with this crane, the availability of the lufing jib was a major consideration in the choice,” says Snyder. “It would be very dificult to do this job as easily any other way. The 218HSL Link-Belt in this lufier configuration is proving to be just what we needed.” act