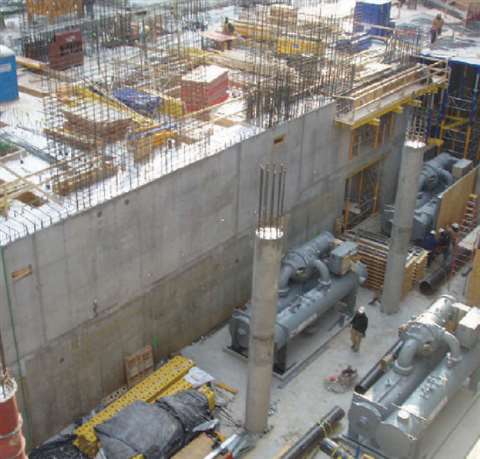 At 92-stories the Trump Hotel and Towers won't be the tallest building in Chicago, but it will be the world's tallest concrete-reinforced building when it is completed in 2009

When it is complete in 2009, the new 92-story Trump Tower in Chicago will be comprised of almost 180,000 cubic yards of concrete, making it the tallest concrete-reinforced building in the world.

More than $130 million of the building's $600 million construction budget is earmarked for concrete. While most tall buildings of this nature are steel-reinforced, as are the Sears Tower and the Hancock Building in Chicago, the Trump Tower will be a concrete structure, mainly because of limitations of the site along the river. Site limitations also required that the building be reinforced on a hugely stable and massive concrete mat, according to Dale Hendrix, senior vice president of McHugh Construction Company.

Last fall, McHugh crews built the mat, hauling 5,000 cubic yards of concrete to the site and dumping it into the mat hole. Measuring 200 feet long, 66 feet wide and 10 feet deep, the mat anchors the building from below ground.

Orchestrating what Hendrix and his colleagues in the construction industry are calling “The Big Pour,” was a monumental task, with 30 trucks working around-the-clock for almost 24 hours pouring concrete into the mat hole.

Prairie Material Sales provided the concrete and the trucks, making 600 trips between the construction site and the concrete distribution site. Chemists were on hand during the continuous pour to assure the special formula of concrete was to exact standards. Designed specifically for the job, the concrete needed to be able to support the building's 360,000 ton weight. The strength of conventional concrete is 7,000 pounds per square inch while the solution used for the Trump Tower mat is designed to a strength of 10,000 pounds per square inch.

By mid December, with the mat complete and the building's basement and mechanical facilities in place, preparations were being made to start bringing the structure “out of the hole,” Hendrix says.

To take the structure skyward, McHugh leased two Liebherr tower cranes, a 420 ECH with the final height under hook at 1,290 feet. The first tower went up in late November while the second one, a Liebherr 420 ECK, went up in mid December. The second tower crane will have a final height under hook of 1,236 feet. Both were leased from Morrow Equipment.

“We chose the Liebherrs' because they were the only ones we could get high enough for this building,” Hendrix says.

Jim Huels, district service manager for Morrow Equipment, which leased the tower cranes to McHugh, says the cranes will be up for a couple of years. “After the structure is taller than the cranes, the cranes will leave their foundation and climb through the building,” says Huels.

The focus over the next few years will be to frame the concrete structure, floor by floor. Once again, several new processes and specially designed equipment will be required to build the building, including custom-designed concrete pumps to reach the upper floors.

The two hydraulic climbing towers will provide most of the lifting needed on the site, although Hendrix says he will lease a variety of cranes from crane houses throughout Chicago to meet specialized lifting needs. To this point, two to three mobile cranes have been at the site daily since work started on the building.