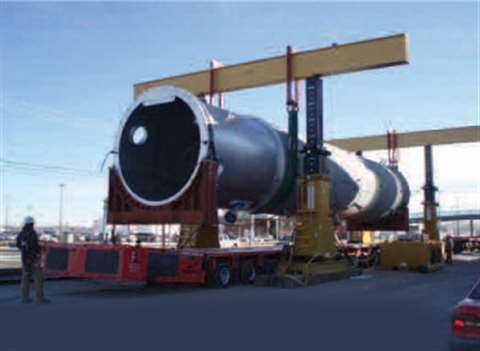 The Power Tower 34PT5400WT supporting the load after the rail cars had been pulled out, allowing the Goldhofer transporter to back in Reactor vessel delicately moved by gantry system

Recently, Phoenix, AZ based Southwest Industrial Rigging completed an intricate project that required the move of a 357 ton (714,000 pound) reactor vessel in a Cenex Refinery in Laurel, MT. The vessel arrived in the US through the Port of Houston and was transported to Laurel on two 12 axle flat deck rail cars. Southwest was contracted to off-load the vessel from the rail cars, and transport it into the refinery and deliver it to two waiting lattice crawler cranes (a Manitowoc 2250 with Max-er and a Manitowoc M250 for tailing).

The company used a 500 ton Lift Systems Power Tower 34PT5400WT, rented from Rigging Gear Sales. It is the new version of the company's 5400 that extends to 35 feet. For transport, 14 lines of a self-propelled Goldhofer hydraulic platform trailer were used.

The 500 ton gantry lift links are adjustable from 16 to 64 inches, which allowed Southwest to attach the lifting hardware to the lift beams where they wanted. Older solid links have to be slid onto the beams from the ends prior to them being installed on top of the gantry legs. Depending on the requirements, the links can be adjusted to reduce overhead restrictions. Compared to the cranes that would be required to make the same lift, the gantry system is much easier to transport. For the 500 tons of lifting capacity, Southwest only used three truck loads.

“We decided to use gantries instead of the two 350 ton cranes because of simple economics,” says Bob Pierson, Southwest's heavy haul manager. “Three tractor trailers of equipment for the job is a great deal less costly. The load was almost 360 tons. In our opinion the gantries were the best way to go. From the safety aspect of having to work closely to a suspended load to the ease of operation, whenever viable we use the gantries.”

Some of the job site challenges were brutal and risky, he says, including strong wintry conditions, with temperatures at times only 9 degrees Fahrenheit and a wind chill factor of zero. With the reactor coming into the facility on a rail car, the car was located right next to an active track.

Caution had to be used in the set up of all the gantry equipment because there was only a four foot clearance off the main line. As with all refinery work, clearance is always an issue. The reactor vessel had nozzles on the top of it that were not in the original drawing. As one can imagine, Southwest had less room than thought and as the crew moved through the refinery, there were a great number of tight turns to negotiate and pipe racks that crossed the path.

“Any time you get in a petrochemical site like this, there is extreme risk,” says Pierson. “Having the right people, the right equipment and the right plan enabled us to perform this task quickly, safely and without any