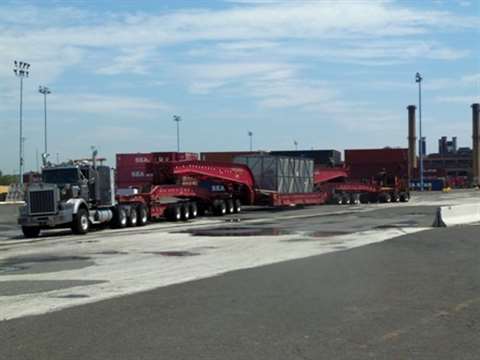 A somewhat bright spot in an otherwise down market for the rigging and heavy haul sector is the business of power generation.

Throughout the country power plant work has been steady, according to Chris Teague, director of marketing for Barnhart Crane & Rigging.

"A lot of what we are seeing is planned expansions of power plants that go back before the downturn," says Teague.

"While this business isn't totally insulated, much of the expansion work we are doing is because the need for additional power in some geographies. These projects need to move forward based on local demand."

Additionally, the power sector also generates work that is not planned. Teague says Barnhart has done a lot of emergency component replacement, rushing to swap out transformers and equipment that have failed.

Emergency component replacement requires crews that are knowledgeable of this type of work.

"What we've been trying to do in the power market and in the nuclear environment is help customers develop a pre-plan for emergency work," he explains. "There is a certain amount of failure that is going to occur. We've been trying to sit down with plant owners and develop an emergency plan for those plants so that when a transformer fails, we already know how we are going to get it out, what tools will be needed to get it out, the haul route for the new component and even which individuals will be key communication points."

Power plants throughout the country are working to increase their output, and this often means upgrading existing equipment or adding new equipment, most of which is huge and heavy. "This requires a lot of pre-planning," says Teague. "This type of expansion can be put on hold, but you can't put it off forever. My understanding is they are choosing to do it now because in some cases, delaying an expansion too long can mean higher prices in the long run. If you aren't going to do it this year, if you wait a few years, you may not save money. 2010 prices are much better than 2015 prices are going to be. It's a very competitive market right now."

Barnhart recently completed a job that involved transporting a steam generator to a coal power plant in St. Paul, VA. Barnhart used an array of tools for the job, including its Goldhofer with dolly wings. There were other noteworthy aspects to the job such as the use of jumpers to protect culverts and a gantry with a side shift system to discharge the generator from the railcar.

The project was quite complicated and slow going, with the convoy measuring 1,000 feet long and weighing 640 tons. Travel speeds ranged from 3 mph to 10 mph through some areas, including the hills of Tennessee, along the 170-mile route.

The 803,000-pound generator was pushed and pulled by four 1,000-horsepower trucks. Electrical crews were a part of the project crew, and were used often to raise and lower power lines and clear the route of obstructions. Most of the journey was accomplished at night, between 10 p.m. and 6 a.m.

For Barnhart, power plant work is considered perfect work for the company, Teague says. "It's a key part of our business and always has been. It's something that we really put a lot of effort into going after and we've put in a lot of effort to gain experience in this sector. We've put in a lot of time getting up to speed understanding the power market and its requirements. From standard day crane type rental project to major component replacement, we do it all within this sector. We can use almost every tool we have in this type of work. So what we love about the power industry is not only is it good clean solid work, but it allows us the lessons learned we gained form this sector, we can apply to other industries."

For us it's a perfect work, there's almost no area, whether it's lifting, hauling or installing these components, we are able to mold our capabilities to the need."

Jerry Connor, director of operations for Bennett's northeast heavy haul division, says that energy has been a huge focus for his company. "Much of the East Coast electric grid needs to be rebuilt," he says. "There's going to be a lot of transformer replacement and power plant work over the next few years." Connor says that many regions are genuinely worried about some sort of catastrophic power outage, and this may be fueling refurbishing and expansion projects. "There are some flaws in the electrical grid that need attention."

Power plant work can involve a range of energy sources, including electrical, solar, wind, coal and hydropower. "I think the whole country is focused on energy right now," Connor explains. "Much of the work is power plant refurbishing and expansion."

While this type of work is lucrative, it's also quite difficult. The recent heavy haul job in PA involved a very circuitous route, with tight turns and low wires travelling through small towns. "The two 19-axle rigs were each grossing almost 400,000pounds at 230 feet long and 15 feet wide, and the turbine bases were 16 feet high loaded out," he says. "At that size and weight you can't just go right down the interstate. What would be a 100 mile trip by car was almost 300 miles on the permitted routes. Our trucks had to wind over the hills and through the dells. It was very slow going." The haul required two civilian escorts and two police escorts.

In the western US, power plant work has been constant. Bigge Crane & Rigging provides power plant clients with turnkey services, hauling transformers and other equipment, as well as using its crane fleet to place heavy components.

Lampson International has specialized in power plant work for decades. Currently the company has work on the books at power plants throughout the US including Colorado, Wyoming, Missouri and Kentucky, with several jobs ongoing in Colorado and Wyoming.