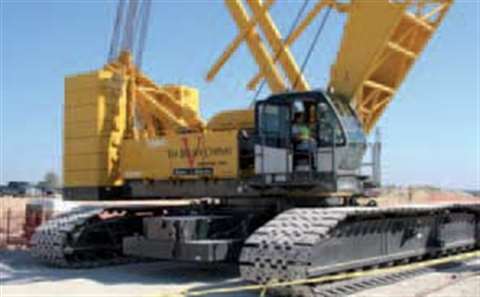 Some 760 pieces of pre-cast concrete - including columns, beams, walls, spandrels, stairs, pilasters and double tees - are being used in the construction of the first of four parking garages being erected by San Antonio-based Van Delden Co. With six cranes in its fieet, Van Delden is a family-owned business that specializes in pre-cast concrete erection.

“On the scale of jobs, this is a large-scale job,” says Eric Van Delden, vice president of the company his grandfather, Frank Van Delden, started in the '30s after immigrating to the US from Germany. “The best part of this job is our new crane.”

Van Delden is referring to his company's new Kobelco CK2500-II delivered last summer and which is the centerpiece of the project. The crane is ideally suited for lifting and strategically placing the various pieces of pre-cast components, Van Delden says. The machine is rigged with 250 feet of main boom and with an auxillary boom point for the whip line.

“Weights on the pre-cast components on this first garage vary from 20,000 to 62,000 pounds,” says Van Delden. “What is unusual about this job is that the tees are pre-topped and the finished foor is already cast. We follow a sequence; it's like a giant Legos job. Once a foor is set in place, crews come in to grout and caulk the joints and that floor is finished.”

The pre-cast components are trucked to the site and arranged in the order that they will be lifted and placed.

The job has progressed eficiently, says Van Delden, who is enamored with the big yellow crawler. “This is our first Kobelco and it's wonderful. It is night and day difierent from any other crane out there - ultimate precision and control. It's like a computer compared to a typewriter.”

Van Delden is a subcontractor on the Austin project for Addison,TX-based contractor Opus West Construction Corp. With a price tag of $200 million, the entire project consists of a one-million-square-foot shopping mall complex that includes retail stores, restaurants, residential apartments and four parking garages. Completion for the shopping development is set for November 2007.

Started in 1935 in San Antonio by former bricklayer Frank Van Delden, the company is still at its original site, says Ted Van Delden, president of the company and Eric Van Delden's father. “My father did all kinds of contracting work and then my brothers and I took over and changed to steel erection,” he says. “In 1975, we started doing pre-cast erection and that's now our specialty. Now, wiTheric and my other son Ted in the business, we are continuing as a third-generation company.”act