Zeton, the world’s largest designer and builder of modular plant and demonstration scale systems, reached out to Precision Specialized Division in November 2015 with a peculiar question: What’s the largest possible load you could transport by road from our plant in Ontario to Linden, New Jersey?

“The client for this particular job approached us and they had preselected a module size that was different than our norm. In this case, 16 feet wide by 14 feet high was well beyond their usual build size and the end destination was of concern,” said Ed Bernard, vice president, Precision Specialized Division based in Woodbridge, Ontario, Canada. 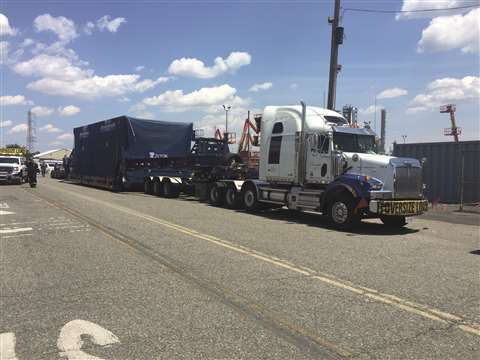 After two years of intricate planning, Precision Specialized Division tackled the transport of 16 modules ranging in sizes from 40 by 12 by 12 feet to 40 by 16 by 14 feet.

This job involved transporting expensive and fragile high-tech instruments, cased in thousands of pounds of steel, over a precarious route from North America’s busiest traffic corridor to one of its most populated – just 20 miles southwest of New York City.

Before they could begin designing, Zeton needed Precision to develop a logistical plan for something not yet built. That meant reverse engineering the whole process two years in advance.

Precision’s team discovered many challenges. Weight-per-axle restrictions in Ontario, at the Welland Canal and at the Peace Bridge to cross the Niagara River into the U.S., required numerous special permit applications. Then, in the U.S., constantly changing construction patterns would make it extremely difficult to determine a route, especially in Pennsylvania. The only viable option would mean a full closure, in both directions, of a 5-mile stretch on State Route 737 just west of Allentown, PA. This small, two-lane road was filled with sharp corners. Without shoulders, the route would require state police to hold traffic at both ends and escort the convoy through.

The team also faced an extremely difficult delivery site. Maneuvering inside the largest petrochemical facility on the East Coast, while in operation, and whose infrastructure was designed in 1909, was going to present very tight corner scenarios and involve the construction of custom rail beams and modifications to their perimeter trailer.

After two years of hard work, Precision had secured permits, designed solutions that eliminated the highest risks and mitigated the impact of secondary issues. But they still had to solve getting the modules out of Zeton’s facility. 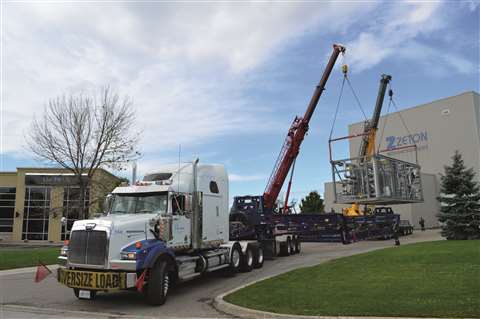 “When Zeton fully completed their project, we were faced with a total of 16 modules ranging from 40 feet by 12 feet by 12 feet on the small end, to their largest at 40 feet by 16 feet by 14 feet,” said Bernard. “We determined the trailer required to transport the larger modules was our Aspen 95-ton, 13 axle rear steer perimeter. The perimeter allowed us to travel lower to the ground by placing the module inside the rails. We used a standard 25-foot deck, but the second had to be a custom-made 13-foot deck, specifically designed to fit the limited access space at the delivery site.”

Zeton’s shipping bay door at a width of 17 feet meant it was built to accommodate their modules’ width, but not that of the perimeter trailer, which exceeded over 18 feet. This left Precision to perform a two-trailer load-out.

The loading process was intricate with each module detached, lifted and lowered to a horizontal position. They were then placed onto a regular double-drop extendable trailer and moved outside the facility. Two 80-ton cranes then lifted the modules again and transferred them over to a customized perimeter trailer, where the crew prepped them for transport.

One by one, each module would make the six-day journey. At the delivery site, it was a matter of precision. Each turn required careful consideration, and thanks to custom-designed rail beams, the team was able to position the modules exactly where they were needed.