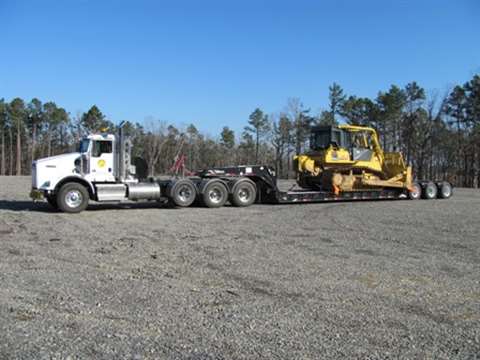 Rated at 110,000-pounds capacity, the Talbert 55SA features the flexibility of a three-plus-one axle configuration or a fourth axle pin-on.

The Fayetteville Shale is a productive natural gas reservoir that stretches across Arkansas from Fort Smith to beyond Little Rock in the USA. Until recently, shale formations such as this were not considered profitable for gas production.
But new technology and rising natural gas prices dramatically altered the playing field for this region and these types of reservoirs. By 2007, nearly 2 million acres came under lease to gas production companies. Thousands of wells have been drilled since that time.
The frenzy continues with a round-the-clock construction boom involving road building and pipeline installation. For contractors like Satterfield Pipeline of Norfork, AR, that means getting the right equipment to the right jobsite at the right time.

Until several years ago, Satterfield Pipeline outsourced its hauling. The company did not own any of its own trailers. But today, the company relies daily, or even hourly, on two customized Talbert haul trailers designed to transport its Komatsu excavators (55,000- to 80,000-pound units) and dozers from site to site.Satterfield’s specialty is laying field gathering lines that connect with larger natural gas pipelines. The projects involve clearing, grading, stringing pipe, and trenching – with each task requiring a separate crew and at least three to five pieces of equipment onsite.

“When we outsourced our hauling, we often had to wait a day or two to get equipment onsite,” said Mark Satterfield, co-owner of the company with his father, Loyd, who founded the company as an earthwork contractor in 1972. “Now, when we get a call, they want you onsite in the next hour. These days, if you don’t get there immediately – someone else will.”

Satterfield says he shopped around when searching for the right heavy haul trailers. The factor that most affected his choice was “overall reliability.” He also was interested in the reliability of the service provided by the dealer representing the trailers.

For a number of years, Satterfield worked closely with Scott Prior, a sales representative for the Little Rock branch of H&E Equipment Services. “Whether it’s a track hoe or a trailer, the dealer is very important,” he said. “If we need parts or service, H&E is here within 45 minutes. We can call them day or night – and that’s why we do business with them.”
Satterfield Pipeline operates two different trailer models from Talbert Manufacturing – a 50SA and a 55SA – both with a non-ground bearing hydraulic gooseneck design.

“It takes a well-built trailer to hold up in the oil and gas industry,” says Satterfield. “We’re not running on the interstate, but rather on rough haul roads. To get to the wells, we may run on gravel roads for 10 miles at a time to get to a jobsite.”The Talbert 50SA has a low profile design and a framework that is reinforced for a future fourth axle. Offering an advantage in load capacity over comparable models, the Talbert 50SA is rated at 100,000 pounds (45 tonnes) capacity in a 12-foot-6-inch (3.8 m) load base. Rated at 110,000-pounds (50 tonnes) capacity, the Talbert 55SA features the flexibility of a three-plus-one axle configuration or a fourth axle pin-on.

Both the Talbert 50SA and the Talbert 55SA deliver greater lifting capacity due to the number of hydraulic cylinders, Satterfield says. While most conventional trailers have two cylinders, Talbert trailers are engineered with four. This key differentiator means that Talbert trailers offer a lifting capacity that minimizes and/or eliminates the need for the frequent load adjustments typically required when operating a two-cylinder trailer, the manufacturer said. Additionally, Talbert strategically places its cylinders further from the trailer’s fulcrum point, allowing greater vertical travel in the deck, according to the company.The Talbert trailers have been customized to fit Satterfield’s requirements.“I can airlift the back axle on my 55-ton trailer,” Satterfield said. “It’s also got the excavator cut-outs so that I can get my booms lower and am not over height regulations. Additionally, it has extra D-rings, and I have pony motors on each trailer which run the hydraulics. So just in case a truck goes down, I can easily hook the trailer up to another truck.”For Satterfield, “gathering gas” is an entirely different ballgame from that of merely laying pipeline, as they had done in years prior. In this market, he said, you get no notice. “You get a call and you need to be there. Every minute that the customer is not selling gas is money lost.”And being able to haul one’s own equipment is a must.“We have the trailers we have because they are good, easy-to-load trailers – and we have a good dealer. That’s the bottom line,” said Mark Satterfield who would certainly echo his father’s sentiments.
Loyd Satterfield was once quoted as saying, “We hang our hat on establishing personal relationships and taking care of our customers the same way we would want to be taken care of.”