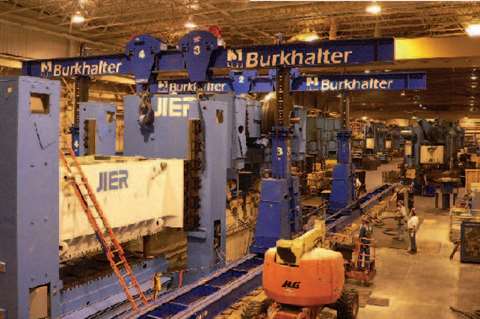 Ships, barges and heavy haul trucks and trailers were used to move four sophisticated JIER mechanical stamping presses from the Far East to their final destination at the Dana Corporation auto parts plant in Hopkinsville, KY.

Burkhalter Rigging of Columbus, MS engineered the heavy haul delivery and installation of the presses that will be used to manufacture vehicle frames for a new model year of Toyota Sequoias and Tundras. The two largest presses each weigh 1.8 million pounds while the two smaller units weigh 842,000 pounds each.

Toledo Press Company awarded Burkhalter the contract to transport and install the four machines. When complete in late January, the project will have involved more than 40 truck loads, plus two barge transports, not to mention three ships from China.

For Burkhalter Rigging, engineering the haul started last summer when superintendent John White went to China to observe the disassembly of the units and their packaging for shipment to the States, explains Phillip Burns, project manager and Burkhalter Rigging vice president of operations. “The equipment was originally planned to come into the Port of New Orleans before Hurricane Katrina changed our plans so we brought them into the Port of Houston instead,” Burns explains.

The first of the larger presses arrived at the Port of Houston in early October, was delivered to the plant by October 30, and was completely installed and operable by November 30.

At the Port of Houston the first press came in three main pieces - the 383,204 pound press bed, the 259,702 pound slide and the 357,145 pound crown. All three were loaded onto a deck barge and transported via inland waterway to the Lyon County Port Authority in Eddyville, KY. The barge traveled up the Mississippi to the Ohio River and then up the Ohio over to Lake Barkley to Eddyville.

“We went to Kentucky and looked around to select the best location to offload these pieces,” Burns says. “We were looking for a location that would offer the closest proximity yet afford the overall safety of the equipment and the personnel on the job.”

While the three pieces were en route Burkhalter had dispatched trucks to Houston to haul ancillary equipment, including the uprights, flywheels, clutches, gears and related components, back to Kentucky. Of the 18 truckloads, three were oversize and overweight. Ten trucks were used for the hauls, most of them from Burkhalter's fleet of Peterbilts and Volvos, using step deck, flatbed and multi axle lowboy combinations.

Heavy hauling by inland waterways is a common mode of transport in the Southeastern US, Burns says. “Typically there's always an option for multi modal, whether it is an inland waterway or maybe a combination involving rail,” Burns explains, “We've done projects where we had to employ three different modes of transportation. We look for creative ways to accomplish moving big heavy pieces.”

After the first press arrived in Eddyville, Burkhalter used a roll off procedure to unload the barge, which was docked longitudinally facing the bank. A ten line self-propelled hydraulic platform trailer self loaded each piece and carried it down the ramps. Each piece was staged at the Port of Eddyville and delivered over the road in the order they were needed for installation. The three main components were hauled using two prime movers rigged with 12 axle lines, one-and-a-half wide. Escorting the loads were Burkhalter civilian escorts, the Kentucky Department of Transportation and Kentucky State Police.

“We would start rolling at 10 p.m. at night to make the 40 mile transport to the plant,” says Burns. “The 40 mile haul took about six hours to accomplish. We would arrive at the plant about 3 to 4 a.m. each morning, the first night placing the bed, then the slide and then the crown.” Each piece had to be offloaded outside onto a smaller self-propelled transporter, Burns explains, “We utilized a 450 ton set of J&R gantries. Inside we utilized a 500 ton hydraulic gantry.”

Installing the presses was also a complicated task with Burkhalter's in-house structural and rigging engineers “blessing” the procedure. “There was a lot going on with the installation,” Burns says. “We had to look at floor loading, plus the press bed is placed in a 30-foot deep pit.”

Moving and installing the two large presses went off without a hitch, Burns says, and the two smaller presses were set to be hauled by truck and installed by late January.