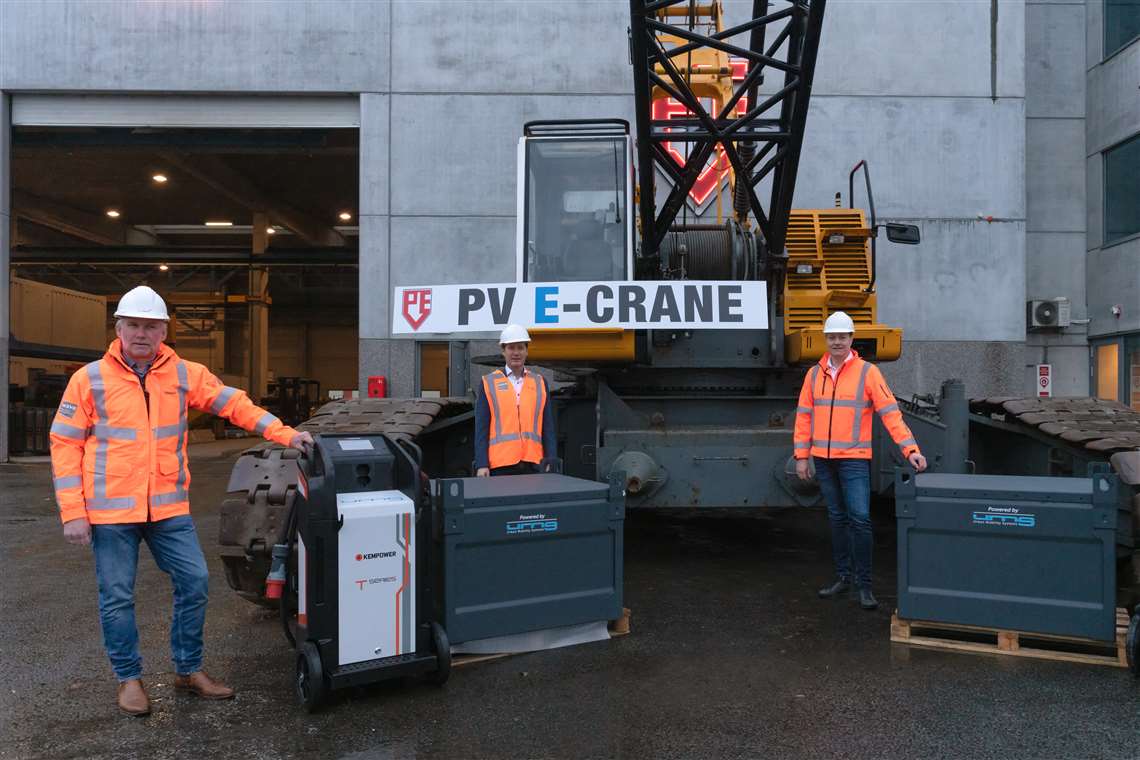 Dutch construction contractor Volker Wessels has ordered the first three units of battery-electric crawler cranes from PVE Cranes. Pictured, left to right, are: Dick van de Laar, director at Volker Wessels Equipment en Logistics; Joost Bömer, PVE Cranes CEO; Rob van den Boogaard, teamleader, cranes and operators, at Volker Stevin Equipment. The 150 tonne Hitachi Sumitomo crane in the background is just to give an idea of the size of the EC160 crane in relation to the battery packs and their charger

While PVE is known for its piling and drilling rigs, it sold the business manufacturing these a few years ago to concentrate on equipment rental. Now PVE has a new company that will use the production facility in the Netherlands to manufacture the electric crawler cranes, in compliance with the Electromagnetic Compatibility (EMC) Directive, CE, TüV and other applicable regulations and standards. 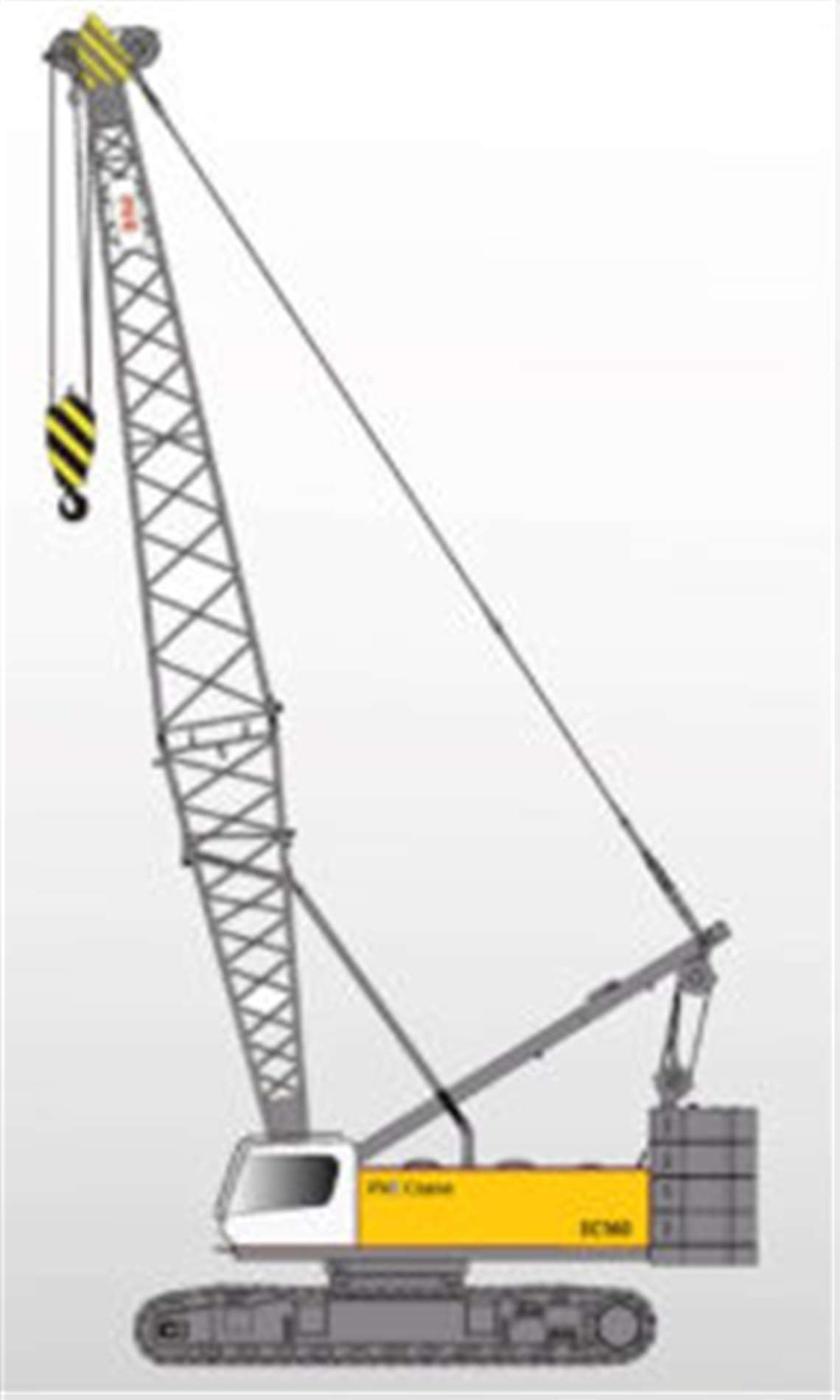 PVE Crane’s new EC series is announced in conjunction with its first customer, Volker Wessels. The major Dutch construction contractor ordered three units to add to its own equipment fleet for use on construction projects in the Netherlands.

The EC series will be a line of 100 per cent battery-powered lattice boom and telescopic boom crawler cranes. Lattice boom models announced initially are the EC80, EC90, EC100, EC135 and EC160, in capacities as per the model numbers. Crawler telescopic boom models announced initially are ECT65, ECT80 and ECT120, also where the capacities correspond to the model numbers.

The first model produced will be the 160 tonne capacity EC160 with 43 metre lattice boom and 42 metre luffing jib. At the time of writing in early January 2021 the designs were ready and components and parts were on order. Testing of the first unit will begin in July or August and the first machine will be ready for delivery in the fourth quarter of 2021, Joost Bömer, PVE Cranes & Services chief executive officer, told International Cranes and Specialized Transport.

Component and fabrication suppliers include Avezaat, Bosch Rexroth, Fuwa, Hirschman and UMS (Urban Mobility Systems). Special engineering is done in the Netherlands by Eager One (formely Euro Rigging). The 650 Volt water cooled electrical system with DC to DC converter is being developed in conjunction with an automotive industry electric vehicle specialist in the Netherlands. 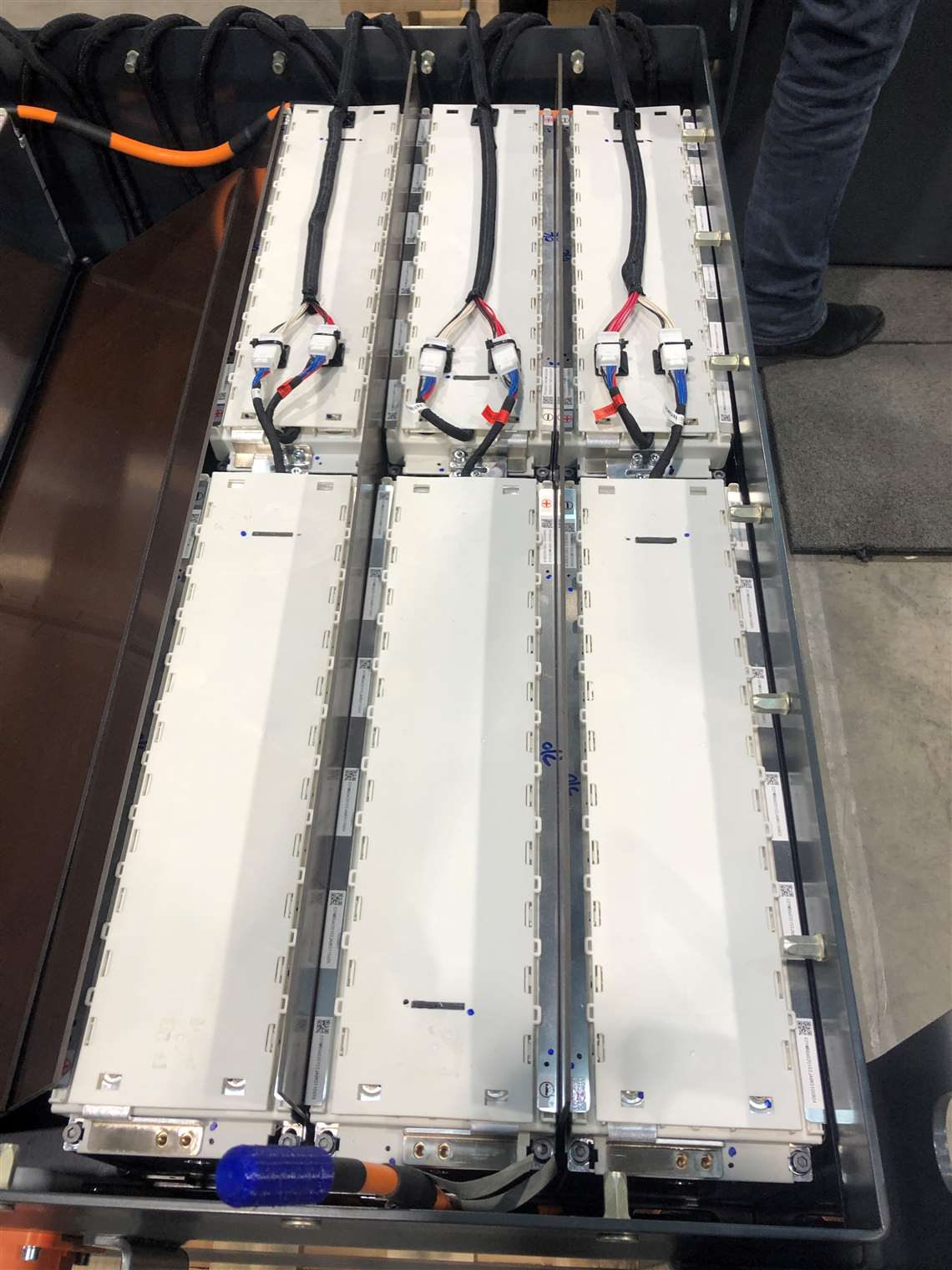 As fully 100 % battery-powered cranes they will emit no oxides of nitrogen, no carbon dioxide and little sound at the point of use – zero emission, Bömer said. PVE claims sufficient battery capacity for a full eight hour shift of operation before recharging is necessary. Maintenance requirements are greatly reduced when compared with diesel machines.

In terms of initial purchase price the 160 tonne battery-electric model will carry a premium of 10 to 15 % over a diesel equivalent. The return on investment will be made quickly, however, and then be much greater in the machine’s overall life, Bömer explained.

The EC160 will have a 200 kW electric motor in place of an engine. This will be used to drive the hydraulic pumps as per a conventional hydraulic crawler crane. Replacing the diesel tank will be a 260 kWh lithium-iron-phosphate (LiFePO4) battery pack. These batteries are the latest development in traction cell technology and have some major advantages, the company said.

“They are super safe, chemically stable and inert. They have a long life and you can recharge them from any level of charge without shortening their life – they are not subject to ‘memory’ issues, said Joost Bömer.

PVE will give a 3,000 load cycle, or 5 year, warranty on the batteries. “The batteries are very efficient. Charging at 45 kWh per hour from a typical 63 Amp site supply means less than six hours to fully recharge the 260 kWh battery from empty to full,” Bömer continued. The charger is carried on board, built in to the crane, so just a mains charging cable is needed to connect to the supply.

The batteries are in two packs, each 130 kWh, and can be easily swapped out for spare charged ones to extend running time. In addition, LiFePO4 batteries are 100 % maintenance free and do not need, for example, any topping up with demineralised water like conventional lead acid batteries do. They are 100 % recyclable as they do not contain any toxic acids or heavy metals, Bömer said.

Netherlands-headquartered PVE Cranes & Services is known as a crawler crane rental house and supplier of heavy duty piling and drilling equipment. It has more than 100 crawler cranes in its fleet and operations around the world. This latest announcement comes just over a month after Liebherr launched its Unplugged electric crawler cranes for construction.