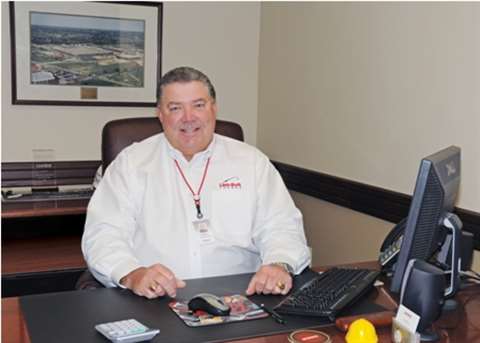 Jim Forshee has been with Link-Belt his entire career.

When Link-Belt honors its employees for length of service to the company, Jim Forshee’s name is among the first ones called. Forshee, who serves as vice president of manufacturing, started at the company in 1975 as an intern while he was still in college at Western Kentucky University. He’s worked his way through the manufacturing hierarchy, serving in virtually every department that has to do with building cranes including production scheduling, production planning and quality management.

Forshee says that he’s “becoming” one of the longest term employees in the building. “There’s a few that have worked here longer than me,” he says of his 35-and-a half-years with Link-Belt.

He says he always aspired to do just what he has done in his career. “I think when you are manufacturing a product like we have here, it gets in your blood,” he says. “It’s not like working in a factory that just makes small components or a process industry. It’s a good feeling to see a product like a crane working in America, and knowing you were a part of it.”

Employee longevity is not a novel concept at Link-Belt, with most of the top management team having notched at least 25 years of service to the company. Forshee believes the company culture at Link-Belt creates a sense of belonging and loyalty. And when a big gray and red crane rolls off the line, Forshee is pleased and proud to be a member of the Link-Belt team.

What is it about this area of the business that keeps you engaged?

Manufacturing, there is never a dull moment. I like working with people and seeing plans actually get put into action. The product we make is a key factor in what keeps me engaged. Everyone who works here and their families, take pride in seeing our product. My father was in manufacturing most of his life, and I think it’s what made America what it is today.

Do you think we’ve seen the worst of the economic downturn? How has Link-Belt weathered the economic storm of the past couple years? Did you have to downsize the staff?

It appears that we have bottomed out, and that we have started to see some slow improvement. If the forecast we are looking at for 2011 pulls through, we will probably start adding some workers in the first quarter of 2011.

As far as this facility, we really didn’t see a big downturn until mid-2009. We were fortunate enough to have a sizeable backlog going into 2009. We made a strategic decision to weather the economic storm, and we found creative ways to maintain our employee base. We took the slowdown as an opportunity to prepare our people for the next upturn. We implemented production shutdowns and voluntary time away from work during our slowest periods. We couldn’t have asked for better cooperation from our workforce to get through this downturn. They were very supportive.

We also devoted extra time to employee training during the slowdown. As a result of our planning and cooperation, no core Link-Belt employees were laid off. All of our shutdowns have ended and everyone is back in the factory. We are confident that we can react much quicker to an upturn in business (because of our strategy). We gain a competitive advantage by maintaining all the skill and knowledge of our employee base. We see this as a huge accomplishment.

How has Link-Belt prepared itself for the economic recovery?

Part of the answer to this question was answered in the previous question, in terms of the employee side. As far as the facility, we’ve made the strategic decision here to basically in-source product. We’ve identified our manufacturing core strengths, which are building and machining structural weldments. We refer to that as upper and lower frames. Fabricating and welding booms, both lattice and telescopic, is a core strength, and another is assembling and painting cranes. We now have a state-of-the-art formed boom production facility. We have a new eight-stage boom painting system. We have a new boom assembly bay. We have a new assembly bay for large truck cranes. And we’ve added a new 5-axis gantry machining center. We refer to it as the ‘big mitz.’ All of these improvements involve the addition of about 145,000 square feet of manufacturing floor space.

How much has this expansion cost?

The capital investment has been about $35 to $40 million. These investments were planned and approved both before and after the economic downturn.

We’ve basically invested heavily in our people as well as our facility with the idea to react quickly and more efficiently than in the past to meet customer demand. And with higher quality. One reason we got the type of equipment we did was to assure higher quality Link-Belt cranes.

What has been the reaction to Link-Belt’s new boom manufacturing facility? Would the company consider manufacturing formed booms for other crane manufacturers in North America?

We’ve had lots of customers through here and the feedback I’ve gotten is that they are impressed with the boom production facility, as well as with the product previously purchased from overseas and now built in Kentucky.

Will we build booms for other crane manufacturers? That’s a question we’ve heard often. But 100 percent of our focus at this time is on continually improving our process and being able to supply our needs for the future. But I’ve been around long enough to know that you ‘never say never.’ But we have no plans at this time to do that.

ConExpo is three months from now. Do you expect that most crane companies will be bringing out lots of new products? Can you give us a preview of what we can expect from Link-Belt?

I would expect to see some of the crane companies to come out with new products. I will leave the introduction of new machines from Link-Belt up to our sales and marketing guys. (See our exclusive ACT News story on page 9 regarding Link-Belt’s new TCC-1100, a 110-ton (US) capacity telescopic crawler crane., which will make its debut at ConExpo in March.)

What is it about Link-Belt that you think distinguishes it from its competition?

The number one thing I think that distinguishes Link-Belt is our people. At our 30th anniversary of this facility a few years back, we had over 85 employees with 30 or more years of service to the company. People like working at Link-Belt, and we put a heavy emphasis on service after the sale. We have a high quality product that meets our customers’ needs.

We are very accessible to our customers too. We are the headquarters, here in Lexington, so it is like one-stop shopping.

I can’t say anything about Kentucky basketball because I am a Western Kentucky University alumnus. Lexington is a beautifully city. It’s centrally located and there’s a lot to do here. My hobby is bass fishing and I get lots of opportunity for fishing in the state of Kentucky. There are many good people here, too.