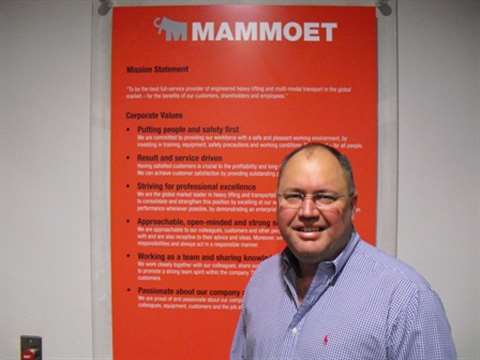 Richard Miller's work ethic is an example to everyone at Mammoet USA. Appointed president and COO of the Houston-based division in the summer of 2011, Miller began his career in the specialized transportation and rigging industry in 1991 on the lower rung of the proverbial corporate ladder. A Texas native, he went to work for Davenport Company (which was a Mammoet subsidiary) after serving in the military. He started out as a steerman for over-the-road trailers. In time, he would hold the titles of SPMT operator, transport supervisor, operations manager, project director, vice president of operations and branch manager. Prior to being named president, he ran Mammoet USA North, which is located north of Chicago. Miller's hands-on field and management experience have made him an asset to the company.

Under the tutelage of Jan Kleijn, former president of Mammoet USA and now CEO of Holland-based Mammoet worldwide, Miller learned the ropes of managing complicated projects and the people who perform them. He says he is a firm believer that a company only succeeds through the hard work and dedication of its employees, and he credits Kleijn with instilling this work ethic at every level of the company.

"I had a very good mentor in this role and owe a lot to Jan Kleijn," says Miller. He is looking forward to growing the U.S. division and continuing to provide custom solutions for the gigantic challenges customers bring to the company.

Back in December, I had the opportunity to interview Miller at the Mammoet USA headquarters in Rosharon, TX. That day and the next, crews at Mammoet were moving the company's new headquarters building about a fourth of a mile from where it was built to its permanent foundation. (See Site Report, page 52.)

How did you get into the business of specialized transport and lifting?

I've been around this business all my life. My dad has always owned trucks, and it was a natural progression for me to get into this business. Coming out of the military, I went to work for Davenport, which later became Mammoet USA. This was a business I knew and I enjoyed it.

I started as a steerman for over-the-road trailers, and I worked my way up through the field. I have a very good knowledge of all sides of the business, from the field and engineering side to the business side.

What is the scope of work performed by Mammoet USA?

We have basically the same scope of work as all of Mammoet. We perform various types of work for the petrochemical, power, offshore, nuclear, mining and metals industries. For Mammoet USA, the bulk of our business is serving the petrochemical industry, but that's because of where we are located. We also have offices in Atlanta, GA, Port Allan, LA and Rockdale, IL. The focus of the Atlanta office is power plants.

What is it about this business that intrigues you?

I would say it's the sheer size of the items we move or transport. The business is ever changing. One day it's a reactor we are moving and then the next day we're moving a module for a different refinery.

But mainly it's the challenge related to the size of the items being moved. I also love the equipment. It's like having the biggest toy box in the world.

When you started with mammoet Usa, diD you envision one day being president? I think that driven people always have a drive to get to a position like this. In my case, it was a matter of "when will it happen in my career?" Luckily, it happened while I am relatively young and can enjoy it. But yes, at one point, I did see myself in this role.

But I also had a very good mentor. I owe a lot to Mr. Kleijn. His leadership style was such that he pushed us to grow in our own leadership abilities and in our own different styles of leadership. He saw what worked for us and he let us grow in that, but he also pushed us.

Can you name some projects that you have been a part of that stand out in your mind?

The British Petroleum Whiting Project in Whiting, IN is the biggest project that Mammoet USA has performed to date. The project encompassed many different elements from barging equipment from the Great Lakes to barging items from the Gulf Coast. We used many different forms of transportation in the construction and expansion at this refinery. It has involved receiving pieces from overseas, and we've transported all of them. The project also involved lifting a lot of equipment. We had one of our Mammoet PTC cranes - one of the older ones - doing some of the lifting work. The crane has a lifting capacity of 32,000 tons. On one haul, we used over 200 axles of hydraulic trailer. We've had eight additional 600-ton capacity and higher crawler cranes on the project in the span of three years.

I was the project director on the job. Because of the size and scope of the job, we opened an office there, which is known as Mammoet USA North.

Another project that comes to mind is a 3,000-ton tower lift for Gulf Marine Fabricators in Ingleside, TX. We used a huge gantry-like system that incorporates Mammoet's own strand jacks. Some of the strand jacks are the same ones that were used on raising the Kursk submarine. It's like a huge gantry system but it uses strand jacks.

There's also the Praxair job in Texas City. It wasn't a very big project. The biggest crane we used was a 600-ton Terex Demag. What intrigued me was that we handled the transport of all the components from Shanghai to Texas. We did everything from charter the ships to placing the equipment on the foundations.

Mammoet is a heavy lift and transport specialist around the world. You are among the first Americans to have a major leadership role in the company. Why do you think the management team chose you for this position, rather than bring someone over from Europe?

I don't feel that Jan Kleijn ever envisioned bringing someone from Europe to fill his position. He had formed a very strong management team here that is self-supporting and confident. We formed a board of management that consists of myself, Hans van Breukelen as executive vice president and Matthijs van Wijk as CFO.

We were the candidates that were chosen by their peers. It wasn't dictated from Holland. Our appointment shows the new vision of the new board of management in Holland. We are well prepared to step in as a team and run this business.

I don't really know if you call it a management philosophy. I believe in leading by example. I believe in having a structured and organized organization. I am a firm believer that personnel are capable of doing what needs to be done. Management simply steers them in the right direction. I think my management philosophy has a lot to do with my military career. If you put rules out, management and leaders have to follow the rules and speak as one team.

What do you do in your spare time when you are not working?

I enjoy spending time with family and watching my kids play sports. I also enjoy hunting and fishing. I am looking forward to getting back to Texas [from Illinois]. I enjoy living near the city of Chicago, and it's a very nice area, but Texas is home.