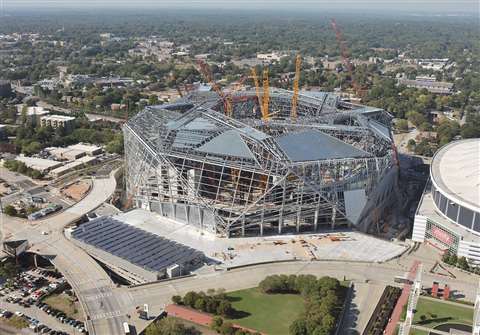 The SyncHoist System provides accurate positioning without the need for additional cranes.

In 2014, the Atlanta Falcons broke ground on a $1.4 billion new stadium in downtown Atlanta. With completion set for 2017, the 30-story structure will contain roughly 20,000 tons of structural steel, a retractable roof and a 360-degree halo video board that will span five stories inside the stadium.

Working with the roof’s structural steel system has been difficult, requiring precise lifting to ensure accurate placement of the massive pieces. Additionally, the main steel structure weighed 850,000 pounds and needed an engineered lifting solution that was precise and safe.

To accurately lift and position the structural steel for the stadium’s roof, the SyncHoist System employed two cylinders located between the hook and one of the two spreader beams, making the side load adjustable. The other two cylinders were located between the other spreader beam and the load, which allowed that side of the lift to be adjustable as well. Operators have full control the load throughout the lift.

“Positioning heavy and unbalanced loads, like the roof for the stadium, can be difficult and, at times, unsafe,” said Dave Klaseus, project manager. “The SyncHoist System provides accurate positioning without the need for multiple cranes, significantly improving the overall safety and efficiency of the lifting operation.”

The ability to adjust the load once it is connected to the crane saves the operators a significant amount of time during the lifting process. Often, larger lifting applications require the load to be set down multiple times to ensure the lift is positioned accurately. With the SyncHoist, operators can adjust the cylinders using pump-mounted, manual valves. The pump also features load readings, which display the load at each SyncHoist cylinder.

“If I pick up the load and it’s not exactly where it should be, I have to spend considerable time to set the load down, re-adjust and try again,” said Klaseus. “With the SyncHoist, I know the load will be exactly where I need it to be.”

The SyncHoist system has been in use for the Mercedes-Benz Stadium since November 2015.