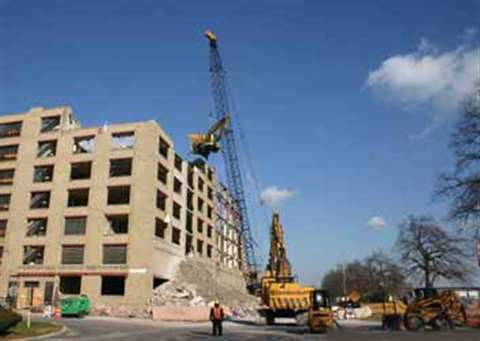 “There is a market for cranes in demolition, but it is rapidly shrinking,” says Bill Moore, vice president of marketing for Brandenburg Demolition, the largest demolition contractor in the nation. Specially designed excavators have taken over much of the work on a demolition jobsite that a crane with a wrecking ball used to do, he says.

“Some municipalities and customers do not want us [or allow] us to use wrecking balls, any more, and excavators are easier to move, create less vibration and there are more attachments being designed specifically for this type of work,” says Moore.

But that is not to say that cranes have been shut out of demolition work, and in fact, a crane is needed at some point on almost every demolition jobsite involving a building over two or three stories (and in many cases several cranes).

“We still use cranes, and there are instances where a wrecking ball is still effective, maybe on a three-or four-story building that is built of heavy concrete,” says Moore.

“We might use a clam bucket for moving debris, but now there are excavators and loaders with buckets that are much larger and can move debris much faster.”

Specially-designed demolition excavators can move around a jobsite quickly and long-reach booms allow them to reach up and out, completing demolition tasks much more effixsciently. Demolition excavators are typically built using stronger or reinforced parts to be able to take the abuse they will receive on a demolition jobsite. Plus, demolition work is very hard on cranes, with the jobsite typically very dusty and dirty, to say the least of being very precarious with jagged materials such as rebar and concrete not conducive to crane setup and a very large swing radius.

Among the most useful jobs for a crane on a demolition site is actually lifting excavators and other equipment to the top of a building to dismantle it floor by floor, explains Moore. It takes quite an effort to lift and place a sizeable excavator seven or eight stories high, and cranes are needed quite often for this task.

Cranes are also needed to lift HVAC units, tanks and other mechanical systems out of buildings that are being demolished. They are also used to lower slabs that have been dismantled.

Implosion technology has also reduced the need for cranes at a demolition jobsite. Implosion, while expensive, is often the safest and certainly the quickest method of bringing down a structure. Buildings can be imploded felling thousands of tons of steel and concrete gently to the ground without harming nearby buildings.

Essentially, dynamic compaction prepares the site for the next structure that will be built. In many cases, the soil at such a site is not suitable for rebuilding, and dynamic compaction can remedy this situation. Dynamic compaction involves scientifically lifting and dropping a heavy steel weight from a crawler crane on a pre-determined grid, according to Moore. The weight dropped can range from six to 30 tons and the drop height can range from 30 to 100 feet, he says. The site is then backfilled with predetermined fill material, sometimes recycled from the original demolition.

In most cases, duty cycle cranes are used for dynamic compaction. Liebherr has developed cranes that are used in this capacity, namely their 100-ton machines.

“Then the crane remembers the [sequence] and calculates each drop.”

In 2005, Essex Crane Rental purchased four Liebherr duty cycle cranes with the intent of adding a duty cycle niche to their rental operations.

“We've done some demolition, some dynamic compaction and slurry wall work,” says Bill O'Rourke vice president of sales and account management for Essex Crane Rental Corp. In terms of large-scale demolition work, O'Rourke says it's simply not a big market for his company.

“We do get some of this work,” he says. “We have rented to a specialty demolition contractor who was knocking down a building and needed to get 200 feet of boom in the air. In Pennsylvania we rented a crane to a contractor who was demolishing a power plant. But truthfully, we see very little quote activity in the demolition area.”

In the future, the industry may see new “hybrid” machines that mate a crane with an excavator. Just last fall, Kobelco Construction Machinery announced it had designed and had orders for a demolition machine with the world's highest working range, the equivalent of a 21-story building. At this point, the Kobelco SK3500D is marketed only in Japan. The machine is comprised of a three-piece boom and four-piece attachment that is mounted on a 200-ton crawler crane carrier.