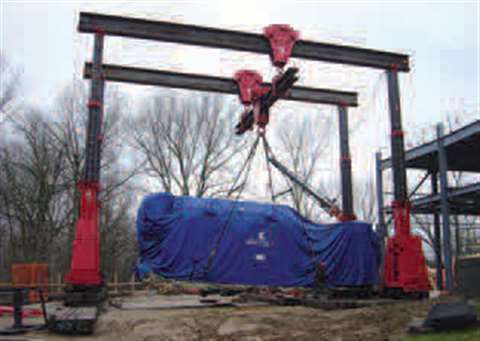 A generator suspended from the specially con. gured gantry was rotated 90 degrees before traveling towards the building ABOVE: At the steam plant note the gantry set up, space constraints, and retaini

As part of a shift in focus, PSC has installed a pair of six-megawatt Wartsila peaking engine generators at Miami University in Oxford, Ohio. PSC rigged the 220,000 pound units into a new building addition to the university's steam plant in December. The route through campus had to be carefully analyzed because of narrow, winding streets with steep grades, delicate areas of infrastructure and underground utilities.

Among the factors to be considered were schedules for buses, classes and coal deliveries; speed bumps; the need to temporarily remove signs and lighting poles and add signage for no-parking and road closed. To minimize inconvenience to students as finals week approached, PSC was given a total of five days to complete the job. This included setup, assembly, disassembly and loading out of the transport and gantry systems, and the transloading, transporting and uploading of both generators one at a time at the installation site.

It would have been impossible to maneuver through campus with the superhaulers that had transported the generators from the Port of Maryland, where they were received from the manufacturer in Finland. Instead, PSC transloaded the generators onto a nine-line configuration Goldhofer trailer in front of the University daycare center. On the 20 foot wide by 300 foot long section of street PSC set up its 500 ton gantry system, set up and staged the Goldhofer trailer, and positioned the superhauler for the transloading. Meanwhile, campus trafic was detoured through the daycare center parking lot.

One of several challenges on arrival at the installation site was that the generators needed to be rotated 90 degrees in a tight space. Rigging options were limited because the building addition was almost complete, and the structural steel directly above the concrete pads onto which the generators would be placed had already been erected. Because PSC was also the steel erector for the building addition, however, erection of the east-end wall column line could be delayed until the generators were set in place, without afiecting the overall project schedule.

Further complicating the installation was a retaining wall along a deep ravine. A complicated gantry arrangement was set up on wood mats near the edge of the retaining wall after the ground had been compacted. This allowed the generators to be rotated by hand using one power link.

PSC dollied the generators into their final position using a 20,000 pound forklift with rigging boom winch attachment and four friction-free dollies. After positioning the generators, PSC jacked them up, removed the dollies, installed vibration mounts and lowered the generators onto their respective concrete pads.