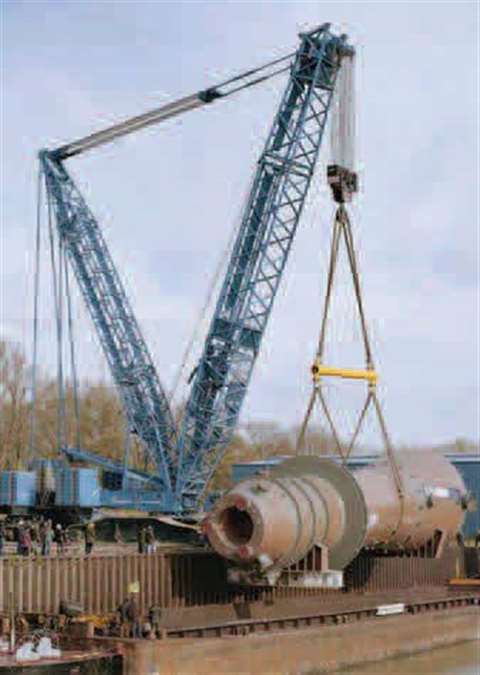 The journey begins as Felbermayr's Liebherr LR 1750 crawler crane lifts the reactor head from a barge at the inland port of Alberner in Austria. RIGHT: The LR 1750 and an LG 1550 worked in tandem to l

(31.5 m) derrick, to lift the reactor head from a barge at the inland port of Alberner and lower it on to two specially–configured Goldhofer trailers. The trailers distributed the load on 2x12 axles and 288 wheels.

The journey then began in earnest and the next challenge Felbermayr faced was to cross a major highway. Th is crossing was complicated by the presence of an embankment acting as a noise barrier in the middle of the road. Felbermayr waited until nightfall before again using its LR 1750, in the same configuration, to lift the reactor head over the noise barrier and onto another pair of Goldhofer flatbed trailers.

The next stage of the 10 km (6 mile) journey was to transport the reactor head to the Chemiewerk Borealis plant for two cranes to install it. The journey, which took six days, was completed without incident and the head arrived at the plant. Joining the LR 1750 on site was a 551 ton (500 tonne) capacity Liebherr LG 1550 lattice boom mobile. The LR 1750 was assembled without its crawlers to operate as a pedestal crane. Working in tandem the two cranes lifted the reactor head from the flatbed trailers and raised it to the vertical.

When it was in the vertical position the LR 1750 operated alone to lift and place it onto a 62 foot (19 m) high concrete foundation. To complete this lift, Felbermayr configured the crane with a 138 foot (42 m) derrick boom for the first time, a configuration that improves lifting capacity by up to 15%, Liebherr says. With the improved lifting capacity, the crane was able to lift the 472 ton (428 tonne) reactor head into position at a radius of 59 foot (18 m).