“Alberta’s crane business has been depressed the past three years,” said Dashney. “Most [crane] companies have either shrunk or moved out. Rather than shrink, Myshak’s approach has been to diversify.” 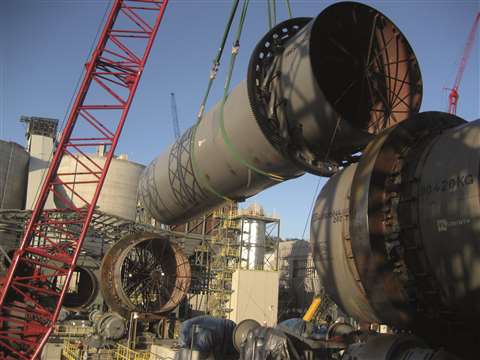 The Process Group’s specialized rigging and heavy-lift technicians provide a comprehensive response to its customer requirements.

He cited a new operation in Ontario as an example. Before that initiative, the company’s sites were only in Alberta and British Columbia.

Myshak holds a keen interest in at least one of Ontario’s major projects, the Gordie Howe International Bridge, a just-under-way project to connect Detroit and Windsor. The late Howe was a both-sides-of-the-border hero – a revered Canadian also revered in the U.S. as a stick master with the National Hockey League’s Detroit Red Wings. Scheduled for completion in 2024, the bridge’s estimated cost is $5.7 billion (Canadian dollars). It will compete with but not replace the nearby Ambassador Bridge, which is nine decades old.

“As we continue to diversify beyond Alberta and British Columbia, that is the sort of important work in which we want to be involved,” Dashney said.

Myshak Crane and Rigging, a division of the Myshak Group of Companies, is prepared to take on much smaller projects with its fleet of more than 200 cranes. 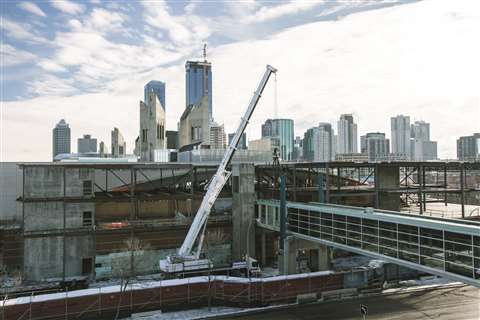 “North-South routes have had their fits and starts for several reasons, including NAFTA,” said Gary Coleman, president and CEO of Big Freight Systems.

Driver retention has not been a problem at Big Freight.

“We respect our drivers and communicate openly with them,” Coleman said. “We’re clear about everything, including what we expect of them and what they should expect of us. We discuss problems that are solvable and don’t pretend we have answers to problems we can’t solve.”

At Big Freight, the company motto, “Better drivers, better service,” has also been the success formula, he said.

“It’s the most appealing opportunity for our company in the coming months,” Snyder said.

“Our specialized rigging heavy-lift technicians provide a comprehensive response to any customer requirements,” Snyder said. “Ontario’s Working-at-Heights legislation presents opportunities for modular construction versus the traditional ‘stick building’ approach as companies mitigate the hazards/costs of working at heights by assembling units on the ground. This allows more efficient construction with the benefit of fewer connection points at height.”

He said that hoisting larger and heavier units presents an opportunity for better crane revenue using larger equipment required for this work.

Snyder noted that worker safety continues to grow as a priority.

“As fines/penalties for worker injury/death continue to climb throughout Canada, companies will continue to search for methods to reduce any risk to a worker,” he explained.

As far as business obstacles ahead, Snyder said, “Increased maintenance, fuel/licensing costs, increased competition within our area and the availability of skilled operators would be our biggest challenges.”

Ron Logue of T-Lane Nation knows about the pursuit of skilled operators. Asked to identify Canada’s biggest heavy-haul challenge, he named the one that his competitors also face.

Logue, T-Lane’s Atlantic Division general manager, said, “We continue recruiting drivers and owner/operators. We continue to find that a lot of the new generation does not want to enter the trucking business. Most of that generation of younger drivers wants to be home at night.”

T-Lane, which Logue describes as one of the higher-paying companies, understands that drivers want and need to make more money.

“Everyone should understand that costs keep going up and up,” he said. “Especially in heavy haul. Now there’s another new cost, a carbon tax. It’s about six cents a liter on both diesel and gas. Changes like that continue to impact our rates.”

Based in Acheson, Alberta, with locations in Quebec, Ontario, Manitoba, British Columbia, New Brunswick and Nova Scotia, T-Lane confronts the same question at each site. How does the company attract new drivers seeking higher income without putting even more pressure on rates?

“I wish I had the answer to that question,” Logue said. “We have to address making a driving career attractive if that driver is going to be away from home for two or three weeks. We’re also relying on social media to reach those driving prospects.”

The bright side of these challenges?

“Our company is getting busier,” Logue said. “There’s also a demand throughout Canada for moving freight.”

Precision Group anticipates a stronger position as it meets 2019’s demands. The company was recently acquired by GTI. Two immediate results from that transaction were Precision’s relocation from Woodbridge, Ontario, to Brantford, and a flow of fresh capital. The firms did not disclose financial terms.

Ed Bernard, Precision’s president, said that in the two month’s following February’s acquisition, his company’s business jumped by about 10 percent.

The heavy-haul and open-deck carrier does most of its work in Eastern Canada and the Northeast U.S., but the company takes on projects across Canada.

“We have a lot of secured work,” Bernard said. “I don’t see a lot of problems ahead.”

He added that the measurement of future business is how many clients seek bids from Precision.

“We’re getting pricing requests for two years out,” he said. “Those requests give us a positive outlook. We were a little slow during Christmas. Business has been up ever since. That’s one sign clients like what we do and how we do it. We have about 170 trucks. When we need assistance, we depend on subcontractors.”

At Maple Ridge, British Columbia’s Supreme Structural Transport, the goal is staying small enough to keep in touch with employees and clients.

“We’ve seen companies clawing to grow in size,” said Jessica Christensen, vice president of Supreme and wife of president Bill Christensen. “We don’t do that, but we are staying ridiculously busy.” 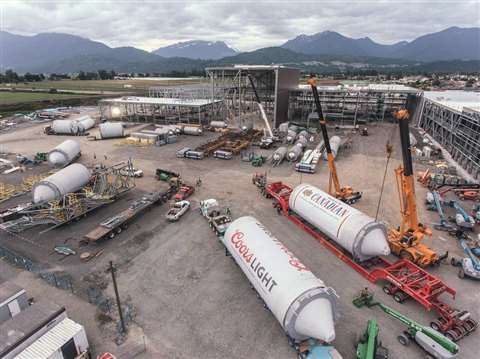 Supreme has supported the construction of a $200 million Molson Coors brewery with the heavy hauling of the plant’s 60-foot tall stainless-steel brewing tanks.

In 2018, supporting the construction of a $200 million Molson Coors brewery claimed much of Supreme’s people and time. Manufactured in China, the new plant’s 60-foot tall stainless-steel brewing tanks arrived by sea in British Columbia. Supreme loaded the tanks on barges for part of the journey to the Chilliwack, B.C. construction site. After a barge-to-truck transfer, Supreme completed the project – 18 months after its participation started with logistics and permitting.

At Quebec’s Express Mondor, third-generation trucker Eric Mondor trusts what he thinks is a clear view throughout 2019.

“I think this will be an incredible year,” Mondor said. “The economy is good in Quebec and all of Canada. East Coast. West Coast. Everywhere. The only dark side could be if a driver shortage develops.” 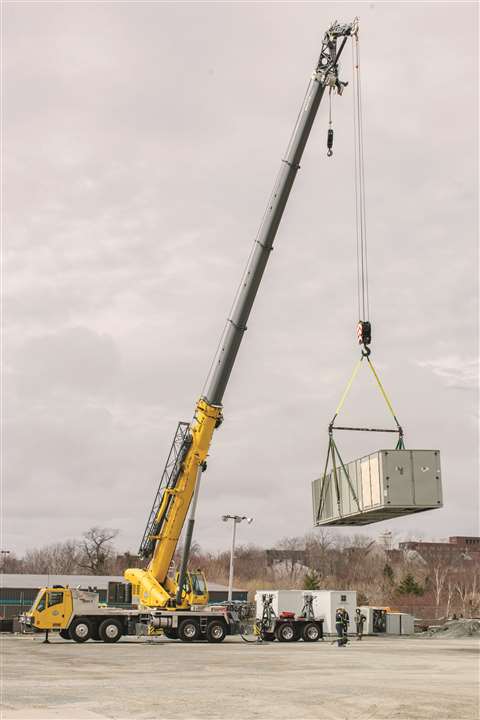 Founded in Germany 66 years ago, Rohde & Liesenfeld now calls Calgary its home base. The global projects company also operates out of Vancouver, Madrid, Houston and Los Angeles. According to Jan Beringer, president and CEO, one of its major challenges is dealing with permitting time.

“The political environment (in Canada) lengthens the process of getting approvals for new projects, whether it’s for new pipelines, LNG facilities, mining developments or expansion of existing facilities,” Beringer said. “A process that might require a year or two in the U.S. takes two to five years or even longer in Canada.”

“Delays drag into years,” Beringer said. “Jobs and economic opportunities for the country are negatively impacted. We have noticed more capital expenditures in expanding and modernizing the ports we serve.”

“There are other positive signs for our company and our economy,” he said. “We’re slowly seeing some signs of new investment in Canada’s oil sands projects with inquiries for large capital equipment to be moved.”

That sector has been soft since the oil price collapse a decade ago.

On the oil and gas side, Beringer’s company is handling a steady movement of coil tubing into Alberta for down-hole activity. Heavy truck movement from the U.S. has supplied the commodity, which China has also begun to supply.

The project market has always been feast or famine for companies like R&L, and Beringer said his company is slowly hoping to enter a more active phase into 2020-2021.

Andrew Miller is director of business development for Irving Equipment in St. John, New Brunswick. He sizes up crane opportunities in his area of the commonwealth as pretty flat.

“The crane market in Atlantic Canada is fairly slow,” Miller said. “Many of the area’s larger projects are winding up. There are some opportunities in wind with some small wind farms being developed over the next few years. There is also maintenance required on existing turbines. Oil and gas projects remain small or on hold. The market for oil remains unfavorable for development. Due to the completion of some large turnarounds and shutdowns in the last couple of years, we expect that many of those facilities will not require any significant upkeep.”

Given the tepid outlook, Miller added, “To maximize our utilization and better serve the markets that do exist, Irving Equipment has invested in new truck cranes and all terrains that are flexible and capable of meeting our clients’ varying demands.”