Rafael de los Santos and two friends recently travelled from Mexico to compete in the New York Marathon. De Los Santos, head of Durango, Mexico-based Tradelossa, finished the 26.2-mile marathon with no problem. It would be nice if the specialized transportation business in Mexico was as simple. But it’s not. 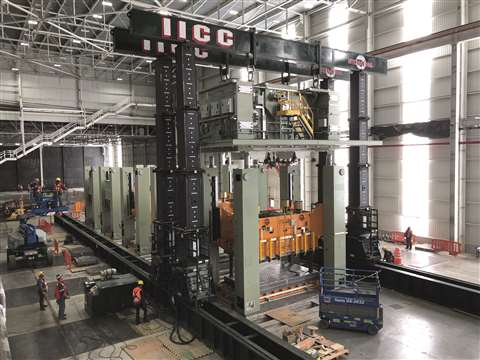 “People think we are in the hauling business,” de los Santos explained. “But our real business is managing risk.”

Tradelossa enters 2019 with few certainties. The company would welcome large projects, such as its recent job to establish a massive wind farm in Acuna, Mexico. Tradelossa hauled all the wind farm components from the Port of Altamira. The heaviest items were 18 nacelles that weighed 71 tons.

Then, probably in early 2020, everyone must prepare for and adapt to USMCA, the U.S. Mexico Canada trade agreement, that will replace NAFTA.

At Tradelossa, workforce improvement has been constant since 1973, when the company went to work on a smaller scale, hauling wood from Mexico’s mountains. 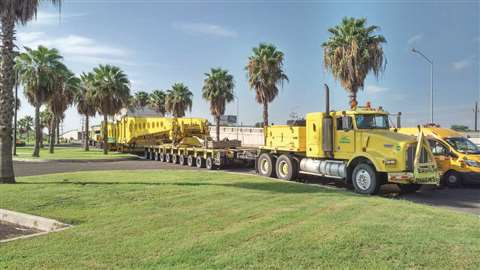 Arnett, CEO of AK Industrial, (with offices in Searcy, AK and Monterrey, Mexico), learned long ago that the one asset for relocating a plant to Mexico is picking the right people for the job.

His company employs 40 people in Searcy and 60 in Mexico. AK Industrial also relies heavily on about 150 as-needed, skilled, Mexico-based laborers for millwright and rigging tasks. Arnett describes them as “outstanding a group as there is.”

That wasn’t the way it was in 1981, when AK Industrial reached its first Mexico relocation agreement.

“We quoted the project,” Arnett said. “We needed someone to coordinate the work in Mexico. We found two guys and asked them for a quote on their part of the project. They came back with a quote that was higher than our entire price for the job. You could say we were off to a slow start in Mexico.”

That development revealed to Arnett one peril that’s part of starting any out-of-country business.

“We had a genuine concern regarding machinery that was relocated from the U.S. and put in place in Mexico,” he said. “We made the decision that we needed greater control over the final install.” 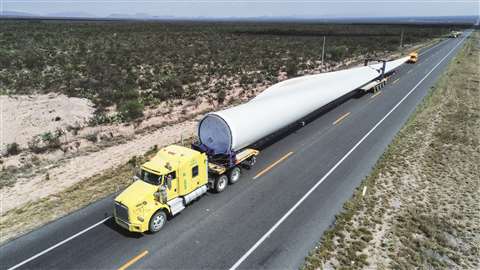 Tradelossa hauled Amistad Wind Farm components from the Port of Altamira to Acuna, Mexico. The project required eight months of planning and execution.

“We struggled in those early years,” Arnett said. “Today, I believe we have put together the best possible team. If our workers in Mexico have visas, we bring them to the U.S. for relocation projects. We’re careful to do what is required. Obviously, the evaluation of your labor pool takes time and is costly. But the result is we now we have our outstanding group of skilled technicians.

“All our plant relocating is turn-key,” he said. “We not only do the rigging and freight, but also electrical and mechanical.”

“This year started off slowly, then picked up in the second half,” he said. “Looking at 2019, there appears to be a lot of automotive industry potential in Mexico.”

The new trade agreement with the United States brings conditions such as a $16 per hour minimum wage requirement. Arnett is uncertain about the impact of that wage standard and what other rules will mean for his company.

“There are new requirements, like safety standards for bringing a vehicle to the U.S.” he said. “I don’t know how that will work out. As for forecasting 2019, I see lots of opportunity in what could be huge plant moves,” he said.

International Industrial Contracting formed its Mexico subsidiary in 2006. According to Ken Goddard, “Our company has evolved into one of the premier rigging service providers over the years. That success and knowledge of auto client systems made our company a candidate to cross international borders.”

Goddard said the company bids on projects using teams on both sides of the border.

“We execute projects with human, equipment and financial resources from both sides of the border,” he said. “In Mexico, our business is all about resources. There are no union halls in which to hire your workforce. Specialized equipment is not readily available. And certain materials specified by our clients cannot always be obtained in Mexico. So we became a licensed importer and exporter to meet client needs with specialty materials – mainly electrical cable and accessories.”

Goddard said resource providers have seen a distinct value in working with his company in Mexico “because they are managed properly, treated fairly and paid in a timely fashion.”

Payment terms and the cost of money in Mexico have prevented some of the smaller companies from dealing directly with some automotive clients. So IICC’s providing those services to its Mexico subsidiary, according to Goddard, has helped these resource suppliers to realize success.

Automotive projects account for as much as 90 percent of Sterling Heights, Michigan-based IICC’s Mexico work.

“Our Mexico office is in a suburb of Monterrey, which is Mexico’s most industrialized city per capita, so we have taken work in steel-producing facilities in and around Monterrey. We are very selective on what we take on in the way of projects, mainly because of the resources available. We try to maintain our focus on core expertise, which is automotive. We have also worked with large component suppliers to the automotive industry, such as tire manufacturing and R&D facilities.”

He said that automotive work remains big in Mexico, and it continues to grow.

“The central states of Mexico, Guanajuato and San Luis Potosi are transforming into the automotive corridor, much like Detroit is,” he said. “Automotive-related projects are plentiful in that region. The wealth of resources we have available to us in Mexico now have a greater level of experience in all automotive disciplines, such as body shops, general assembly, powertrain and stamping work. Keeping ourselves on automotive projects allows us to keep our team fresh and focused. Work outside the auto industry is carefully reviewed. If it seems like a good fit, we will pursue it, depending on our resources available at the time.”

Goddard looks back on the decision to open the Mexico branch as the right one.

“It was a small office when we started there in late 2006,” he explained. “Over the past 12 years, we have grown in order to address the client and project needs. We now reside in a 70,000-square-foot facility in Apodaca. About 60,000 square feet of the facility is warehouse and fabrication space with the remaining space for administration. Systems passed down from our parent company, such as ISO 9000, have been adapted to the Mexican culture. Autonomy has been achieved on most fronts, while recognizing that additional resources can be had just by simply requesting the support of our parent company, IICC.”

ALE recently demonstrated the advantages of its Mega Jack system in Mexico, completing a 14-meter-tall jack-up of a 13,000-metric-ton topside.

For the barge load-out, the topside needed to be jacked-up to about 10 meters so it could be placed on a specially designed desk support frame (DSF).

For the jacking operation, ALE configured the Mega Jack with eight towers, each with 5,200 metric tons capacity. This provided the strength needed to lift such a heavy weight whilst evenly distributing the ground-loading pressure. 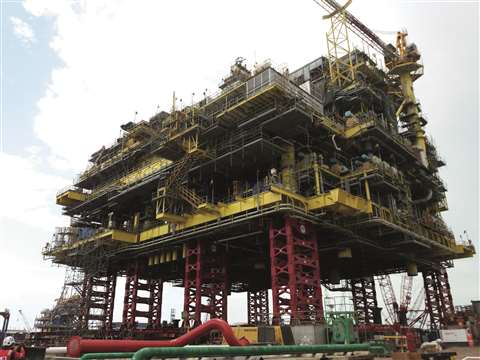 Much like the views of de los Santos and Arnett, future work is not an absolute, Goddard said.

“We’re not sure there is such a thing as a typical project,” he said. “Even though the work may sound similar, such as a body shop or a transmission plant, each project has its own set of circumstances that sets it apart. Work content, schedules and geography all play a part in making each project unique. Monterrey and Sterling Heights work hand in hand, from inception to completion. The elements in each opportunity are mutually reviewed and discussed and a plan of attack is developed, with sometimes Sterling Heights taking the lead, and sometimes Monterrey.” 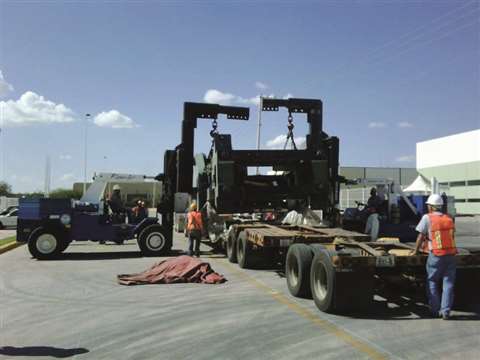 Neither NAFTA 2019 nor USMCA in 2020 intimidates Goddard.

“We do not see any challenges with NAFTA or the new USMCA agreement,” he said. “A lot of the production in Mexico gets exported to South America, so the proposed tariffs are a non-factor. In fact, we see these agreements as helping our industry more than creating challenges. The automotive industry was largely responsible for the emergence of the middle class in Mexico. Automotive gave the ‘have nots’ a taste [of success] because this industry brought opportunity.”

Goddard has been managing projects in Mexico since 1988 and has witnessed the growth on a first-hand basis.

“When the original NAFTA agreement went into effect in January of 1994, it was viewed as a good thing,” he said. “All parties benefited from it. We see the new agreements doing much of the same now that they have been modernized to fit current conditions.” 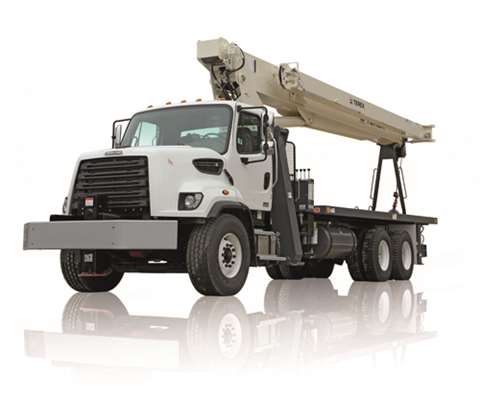 The Terex BT 5092 has a maximum lift capacity of 22.7 metric tons (25 US tons), a four-section, full-power maximum boom length of 28 meters (92 feet), a quick reeving boom head and include an electronic rated capacity indicator.

Founded in 1992 as a crane rental company in the Bajio area of Mexico, Auriga has locations in five Mexico cities including in Querétaro, San Luis Potosí, Mexico City, Villahermosa and Oaxaca.

Goddard pointed out that the automotive industry, whether in Mexico or the U.S., has always been marked by peaks and valleys.

“To survive both ends of that spectrum,” he said, “a company has to be nimble to survive. A company’s 2018 projects generally produce 2019 models, and 2019 projects will produce the models for 2020. We are seeing a little lull in opportunities for 2019, which isn’t that unusual given the amount of work there has been in the past four to five years. We feel our clients are just catching their breath. And there is a new president in Mexico as of December 1 of this year.”

If there is a downturn, perhaps it will be quick.

”Our experience tells us this slower time will be short-lived as model changes drive sales, and sales pay for everything,” said Goddard. “This also give us a chance to catch our breath as well as address our internal needs that may have been sidelined due to how busy we have been. In the slow years of 2007 and 2008, we were actually quite busy. We weren’t selling. We were buying. Automotive rarely sleeps, even in a downturned economy. Our strength allows us to stay in the game while our clients sort out their needs.”