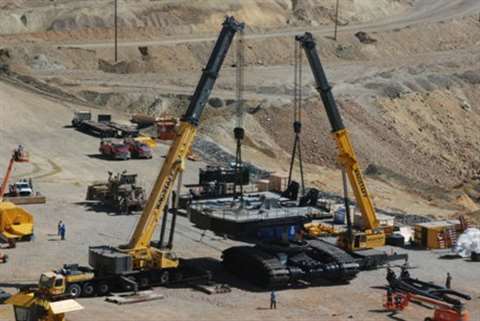 Most Wagstaff Crane customers are in Utah, Nevada, Idaho and Wyoming. The company serves them with a crane fleet with lift capacities from 23 to 550 tons.

After 35 years in the trucking business, Don Reeve, owner of Reeve Trucking, is ready to throw up his hands.

He is among those trying to head off a CARB (California Air Resources Board) requirement that "will make many of my trucks illegal." As this ACT issue went to press, the restriction was scheduled to go into effect on Jan. 1.

"I have no idea how a small board of people could become so powerful, but they have," says Reeve. "They have no hands-on experience in how we function. But they've deemed the diesel engine evil."

Stockton, CA-based Reeve Trucking serves California and surrounding states with 10 owner/operators, 85 trucks and 500 trailers. The company does about $19 million in business annually. Maintaining that gross is no certainty.

"Our 2010 year was our worst," Reeve says. "Worst for my employees. Worst for myself. Then you magnify that by some of the absurd things CARB does. Those people are far removed from the trucking industry."

From its headquarters in South El Monte, Coast Machinery Movers also confronts daily some of California's quirky approaches to doing business. The state's massive debt and - compared with other states - excessive regulations have chased many people and businesses to other states.

"In the 1980s and 1990s, aerospace accounted for about 90 percent of our business," reports Lindy LaDow. She's Coast's general manager and the daughter of founder Larry Beard.

"Today, aerospace is down to about 20 percent of our business."

The company's most celebrated event might have been delivering a retired Air Force One to the Reagan Library in Simi Valley.

Now entering its fifth decade, Coast has switched emphasis to customers in food processing and pharmaceuticals.

"Both those businesses have good areas for us," Larry Beard says.

Shrinkage among newspapers and other print operations have also boosted Coast's business. As print operations consolidate, Coast has welcomed opportunities to relocate presses. One of its most recent press moves was to a customer in Chile.

"Our profit margins are lower during the economic slump," says Lindy LaDow. "But my dad is ingenious in some of the things he does. We have 52 employees, and we've not laid off anyone."

Larry Beard adds, "We have a 2012 backlog, so the year looks pretty good to us. But there are always challenges in California. We were working with one customer on a 10,000-square-foot building. It took longer for the state to get us the permit than it did for us to complete the building."

Tempered optimism holds firmly at Wagstaff Crane, which does no business in California. The company serves the intermountain area from Utah locations in Salt Lake City, Provo and Ogden.

"In 2011, we had a little more business than in the previous few years," says Ronnie Wagstaff, a lift planner and a third-generation employee. "We expect things to be a little better in 2012. So we'll add a few employees. We'll add a few cranes. We'll be careful not to overbook. We'll take things slow and steady. That's the way we like it."

Wagstaff's 50th year anniversary is just down the road, Wagstaff says. "We'll get there doing things the way we've always done them," he says.

Wagstaff's grandfather founded the company. Many current employees worked with the founder.

"We have probably 15 people who have been here 20 to 30 years," says the founder's grandson says. "We're loyal to them. They're loyal to us."

Most Wagstaff customers are in Utah, Nevada, Idaho and Wyoming. The company serves them with lift capacities from 23 to 550 tons.

"We've had days where my dad, uncle and I sit in the office," Ronnie Wagstaff says. "We've also gone through times of being crazy swamped. Of course, we prefer slow and steady. We don't like ups and downs. We don't like to get all wide-eyed over a project, then see it go away because of budget cuts or a proposal's falling apart."

"As the year moved on, we began to realize that it might be our first billion-dollar year," says Rob Mackay, president. "It was. This was a really big mark for us."

Mackay points to Ritchies' adept work with online customers. "Online sales are important, but we find that many customers still want to come to auction sites for an in-person look at our used equipment," he says. "Whether our customers are in Poland, Australia or Texas, they have the opportunity to do that."

Online buyers don't get short shrift. As many as 50 high-resolution photos accompany each online item. A prospective buyer can view each essential element.

"It's a very detailed information program," Mackay says. "It's one of the many offerings we've added to the pile of our services, which customers tell us they need."

"There are many people on the sidelines," he says. "They're looking for late-model equipment with the specs that meet their needs. I think that will be the case for most of 2012."

Which, of course, means another promising year for Ritchie Brothers.