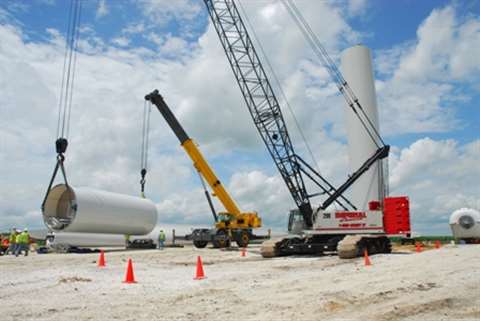 Wind work offered good business in 2008 and 2009 in the northern US. But wind tower erection slowed in 2010, although indications are that the business will pick up in 2011.

Some of Michigan's numbers could knock you down:

Jim Chamness has decided that his Michigan company won't stay down.

"I can see the light at the end of the tunnel," says Chamness, president of Grand-Davo Crane Services. "Right now, the light is just a dot. But it's definitely there. We had to face what the market heeded. We've lost good people. We've sold off assets. We've still got a few years of 'bad' ahead, but I'm hopeful we're turning the corner."

Based in Kalamazoo and Battle Creek, Grand-Davo recently added a third location.

"We have a new governor (Rick Snyder)" Chamness says. "We hope he will be effective. What the last governor (Jennifer Granholm) tried didn't work. As for this year, I think it will be similar to 2010. A slow start, then an uptick in the second or third quarter. We could be two years away from significant gains. The recession started early in Michigan, and I think we will be coming out of it slower than the rest of the nation."

"I say that in consideration of what we all went through in 2008 and 2009," Tierney explains. "For example, we have an out-of-town project to build four new Wal-Marts. We wouldn't have been excited about that job some time ago. But after the last few years, we're excited."

Industrial and refinery assignments have provided regular work for Imperial.

"The industrial and refinery work will continue," he predicts. "We anticipate a 2012 increase in our road work and other infrastructure projects. We've been doing lots of work in Illinois, Iowa, southern Wisconsin and northeastern Indiana. We expect to keep serving those areas."

Tierney expects highest equipment demand to be for Imperial's mid-range all-terrain cranes up to 250-ton capacity.

Imperial's fleet goes up to a 550-ton Grove, and none of the fleet has been sacrificed to economic softness.

"We didn't have to divest any of our fleet," Tierney says. "Of course, we haven't purchased anything to speak of, either. We've been fortunate the last few years. Our business has been good. Not great, but good."

Northern States Transportation found a different way to get through a weak economy. The Hutchinson, MN, company turned its entire business focus onto wind energy. In 2002, Northern States threw itself into hauling hubs, nacelles and the components of wind towers.

"Wind energy was responsible for nearly all our business," says John Thompson, who leads the 30-year-old company. "We've transported from almost any U.S. port" to wind-farm sites in the US and Canada, Thompson says. "There's money to be made in that business. Our profit margins have been good. Better than in some of our other businesses. Our revenue has continued to grow. But there was a problem. You can't set goals. Wind energy is too unpredictable."

Wind energy traditionally depends on tax breaks and other incentives.

The Japan nuclear tragedy might make wind an even more attractive energy source. Still, Thompson will guide his company back to its former business segments and not look back.

That means the company's 45 people, 30 tractors and 45 trailers will go back to hauling pressure vessels, process equipment, boilers and transformers.

"That business is viable by itself, and wind energy is not," he says. "Moving in one direction, to wind, wasn't our saving grace, but turned out to be good for our company. Now it's time to move in several directions. I still expect wind energy to account for 60-70 percent of our business in 2011. Next year, it will be down to 50 percent."