A roundup of the lateset remote-control systems for setup, rigging and operating cranes.

Remote control systems are common in the assembly and rigging of many different classes of cranes. These systems are used to deploy outriggers, rig counterweights and perform other crane setup operations. 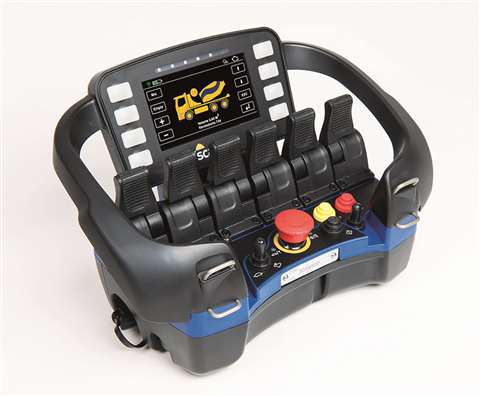 Liebherr’s mobile cranes that have the LICCON2 control system are now programmed as standard for the remote control of all crane movements. In many cases, remote control operation from outside the cab allows for clear lines of vision and proximity to the load.

Designed for heavy-duty use, Scanreco’s Mini Transmitter is compact and easily customized to meet OEM and system integrator requirements, the company said. The Mini Transmitter can accommodate one to six linear levers or one to three joysticks, as well as several push buttons and switches. Operator feedback features include a high-performance color display, monochrome display or LEDs. Despite its compact footprint, the Mini’s ergonomic design supports hours of daily usage without causing operator fatigue, the company said. The stop function conforms to performance level “d,” (PL d) as specified in EN ISO 13849-1, a legally binding standard for safety-critical components of control systems.

The Mini Transmitter communicates with the corresponding receiver using a Scanreco protocol and a unique identity code, which guarantees that no other transmitter (Scanreco or other manufacturer) can activate the machine unintentionally. In the case of a damaged transmitter, the new unit can be easily connected and paired to the existing receiver. The units are locked like the prior version with no special programming required.

Scanreco Mini Transmitter features include frequency bands: 433-434 or 902-928MHz (other frequencies on request); an operating range greater than 100 meters or 330 feet, a 10 meter or 33-foot cable control; operational temperatures between -4 degrees F to +160 degrees F; and a protection category of IP65.

“Scanreco transmitters and receivers are designed for heavy-duty usage, built to withstand vibration, extreme temperatures, and function reliably for years with little to no maintenance,” the company said. “Scanreco’s never-stop technology is at the heart of all its products.”

ELCA has seen continued to growth in its markets in 2019, and is working on finalizing and launching new remote-control system projects.

ELCA’ popular “E1 MIA” push button transmitter is selling well in markets around the world for bridge crane and other applications, including increasing requests for tandem or master slave formations, and other custom specifications, the company said. The E1 MIA won the IF Design Award in 2017.

Standard features include the ELCA interchangeable, powerful lithium battery pack with the “ELCA-Clip” programmable settings, standard feedback with potentiometer and a LED display version. Flexibility is increased by the addition of optional toggle or buttons, the company said.

“E1 radio technology has also been installed in other new transmitter designs that are focused on special sectors or applications that offer some of the most unique compact safety radio remote models on the market,” said Federica Zanella, who works in the ELCA Radio Command marketing department.

“E1 Vetta and E1 Pic are both super light, compact and effective waist portable radio systems, powered with a 20-hour lithium battery via the ELCA-Clip,” the company said. “They feature three or five toggles, up to nine on/off outputs, plus the possibility of an analog output for example, via potentiometer.”

The also company offers its existing line of joystick models and promises new products yet to be launched by the end of the year.

HBC-radiomatic, a global technology leader in the field of radio remote controls, has introduced a new generation of its spectrum controller series with updated radio technology, high performance color displays, enhanced safety and superior operator ergonomics, the company said. It includes a new transmitter known as the spectrum 4. 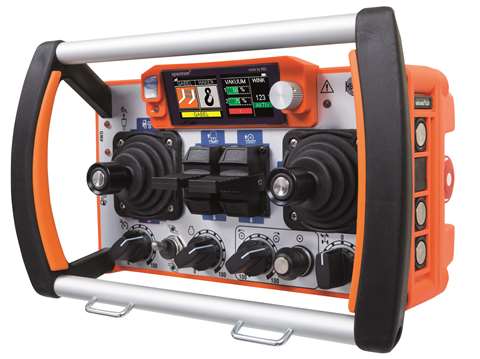 “The spectrum 4 offers a wide selection of additional features as well as powerful batteries that make it the perfect solution for large equipment,” said Toni Bluemlein, office manager and marketing coordinator, HBC-radiomatic. “The new spectrum generation will continue the success of our best seller, which was started more than 30 years ago.”

HBC-radiomatic also presents newly developed features for its live video feedback, radiomatic photon, which includes a two-camera selector switch and a portable solution with flexible use of live camera feedback at different locations.

The operator can place the camera wherever it is needed without any installation effort or cables. The camera can be positioned according to the working environment to provide the operator with the safest work area for optimum viewing. The radiomatic photon can be combined with numerous Orlaco camera options, including infrared models or solutions for special viewing angles.

The SmaRT PG (Pistol Grip) is Cervis’s flagship remote that is positioned as a leader in the mobile crane industry. With an array of component and display configurations, the SmaRT PG remote can be customized to customer-specific applications, the company said.

“The SmaRT PG remote is in a league of its own when it comes to durability,” said Rafael Lozada, director of mobile sales, Cervis. “The rugged waterproof glass-filled polymer construction of the enclosure withstands the harshest, most rigorous environments. The sealed trigger design is like none other in the industry.”

The SmaRT PG easily commands digital, pulse-width-modulated or analog outputs as well as CAN Bus protocols of SmaRT Base Units, providing single-handed operation in an ergonomic layout. 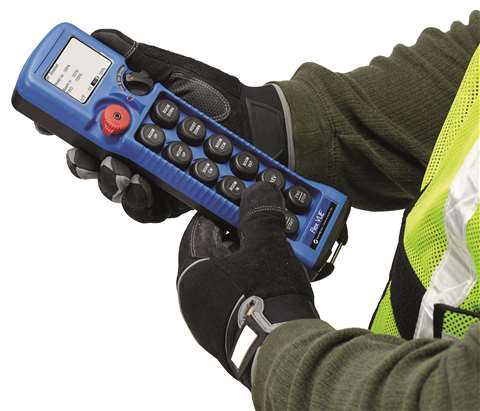 Flex VUE can be combined with Magnetek’s MHR Radio Controller to provide a radio control system for operating mobile cranes.

Using Direct Sequence Spread Spectrum (DSSS) and Channel Hopping technology at 2.4GHz, the SmaRT PG is designed to operate in congested radio environments. If worksites prohibit wireless, the PG’s umbilical cable option provides system communication to the receiver. All PG’s use the tool-less wireless association feature for quick and easy pairing to a SmaRT Base Unit, Lozada said.

Other notable products within the SmaRT family of remotes designed for the mobile crane and related industries include the Mini Console Box (MCB) and Console Box (CB). Constructed from the same glass-filled polymer material, they are engineered to provide unparalleled performance, he said.

“Our remote-control product offerings with specific features and configurability are suited for hydraulic-controlled machinery,” said Lozada.

Based in Pennsylvania, Cervis Inc. is a product development and manufacturer of wireless remote solutions.

In the Flex VUE wireless control, Magnetek has combined a graphic display with a handheld transmitter to provide the advanced communications, configuration convenience and two-way feedback traditionally found in belly box transmitters.

“The MHR integrates the components of a radio receiver and hydraulic controller into a single unit, reducing cost and freeing up valuable space,” the company said. “Magnetek’s CAN-6 receiver is also compatible with Flex VUE, making adding remote control to hydraulically CAN-Bus-controlled machinery simple. The compact design is rugged enough to handle outdoor environments, and the quick response allows for precise control.”

Customers can combine Flex VUE with the Flex M wireless receiver that features a modular plug-and-play design, similar to a PLC, and allows them to use the same type of receiver component for any size application, the company said.