Our annual rental confidence survey provides an opportunity for crane rental firms around the world to voice their opinion on the state of the crane rental market. This is even more important this year given the impact of the ongoing coronavirus around the world. The more people that take just a few minutes to inform us of their views, and the longer this survey runs, the more information we have to analyse. The results help those in the industry gain a fuller, global perspective of this business arena as reported by their peers. With ever greater numbers taking part in our survey this insight becomes increasingly comprehensive, so thank you to all of you who took part this year.

It’s worth noting that we had a particularly strong response from our North American readers. What frame, if any, this gives the results we’ll leave for you to decide. Why it happened is another good question. Possible reasons could include greater social media engagement, a strong connection with readers in the USA through our sister magazine American Cranes and Transport and our partnership with the SC&RA, or a willingness from US readers to make some order from the chaos following a particularly politically turbulent year.

So, on to the results. This year, with 41 percent of respondents indicating that they feel business conditions are currently stable and 31 percent saying they are improving, the impact of Covid 19 may not appear to be as bad as first feared. That said, 28 percent think business conditions are declining – which is a slight increase on last year’s figure.

This negativity becomes far more pronounced when looking at how business activity was in 2020 compare to 2019. Half of the total respondents indicated that business activity had declined, compared to just 19 percent last year. 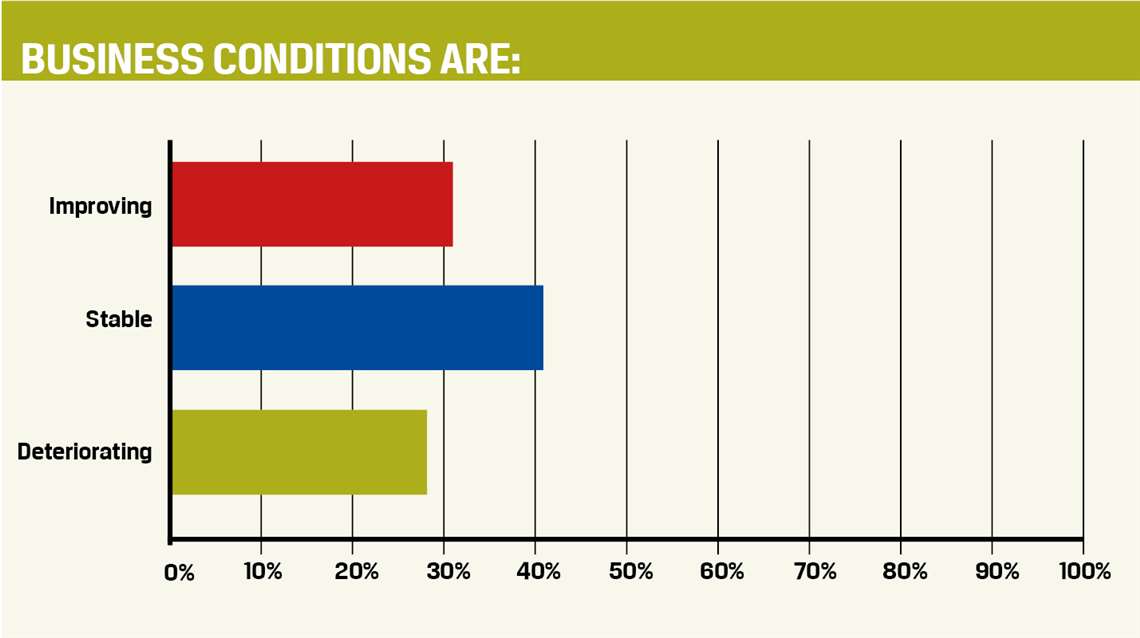 With the unprecedented events of the global pandemic creating havoc around the world for almost 12 months now, and given half the respondents have experienced a decline in business over this time, it comes as no surprise that people think things can only get better and 47 percent of respondents expect business levels in 2021 compared to 2020 to improve. Slightly concerning, perhaps, is that 15 percent envisage further deterioration; pessimists or realists? That leaves 38 percent believing business conditions will simply remain stable.

With general positivity for an improved 2021, surely boosted by global Covid 19 vaccination programmes, there is corresponding confidence that investment in fleet expansion will occur. Half of respondents think that their company will spend more on their fleet in 2021 than in 2020. This leaves 31 percent that think fleet expenditure will remain the same and 19 percent that think it will be lower.

This confidence shown in machinery investment isn’t quite as strong when it comes to the employment market, although it remains significantly positive, with 44 percent of respondents saying that in the next year their company will increase the number of employees it has. This is closely followed by 41 percent saying there will be no change, and 16 percent who expect their company to reduce the number of employees. This roughly reflects the same split as shown in last year’s survey, although with an increase in the number that expect redundancies. With rising unemployment news headlines currently being broadcast around the world, it is perhaps unsurprising that positivity for the year ahead is tempered when it comes job security.

There is positive news for crane rental companies, however, when it comes to changes in rental rates over the last 12 months. In contrast to last year’s results, where rental rates only increased in the tower crane category, this year increases are reported by a proportion of the respondents across all tower crane, wheeled mobile crane and crawler crane categories. 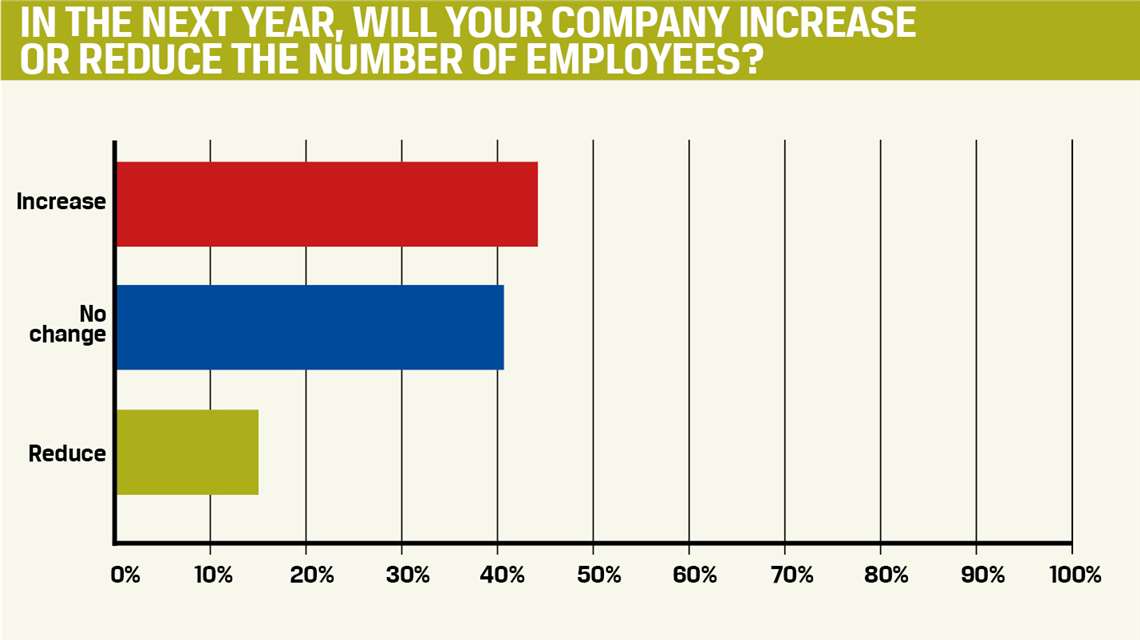 Looking at rates for crawler cranes, in the 70 tonne class the daily rate comes out at $1,330. Well over half of those that answered (63 percent) said their rates for this sector remained the same as last year, although 11 percent said they had risen. For 150 tonne class crawler cranes, the daily rental rate average is $4,685. Again, the majority (53 percent) said rates remained the same over the last 12 months as in the previous 12-month period, with 11 percent saying they had risen.

When it comes to tower cranes, however, in both load rating classes (150 and 300 tonne-metres) the answers show that the majority of companies that answered decreased their rates over the last 12 months. This decline perhaps naturally follows the boom demonstrated in last year’s survey, where rates had risen due to global demand, particularly from the increased use of prefabricated prefinished volumetric construction (PPVC) techniques in city centres worldwide. For tower cranes, in the 150 tonne-metre class the average daily rental rate is now $1,381, while the 300 tonne class has an average rate of $1,831.

Looking at expected changes in rates over the next 12 months, again, in all crane categories other than tower cranes the predominant response – by a long way – was that most expected rates to remain the same. For both classes of tower crane, however, respondents forecast the sector will bounce back and will return to charging higher rates. In the 150 tonne-metre tower crane category 39 percent of respondents expected to charge higher rates in the next 12 month, while for the 300 tonne metre category this increased to 44 percent of respondents.

When it comes to fleet utilisation, 59 percent indicated they thought this would remain stable, 25 percent expect improvement, leaving 16 percent expecting a decrease. 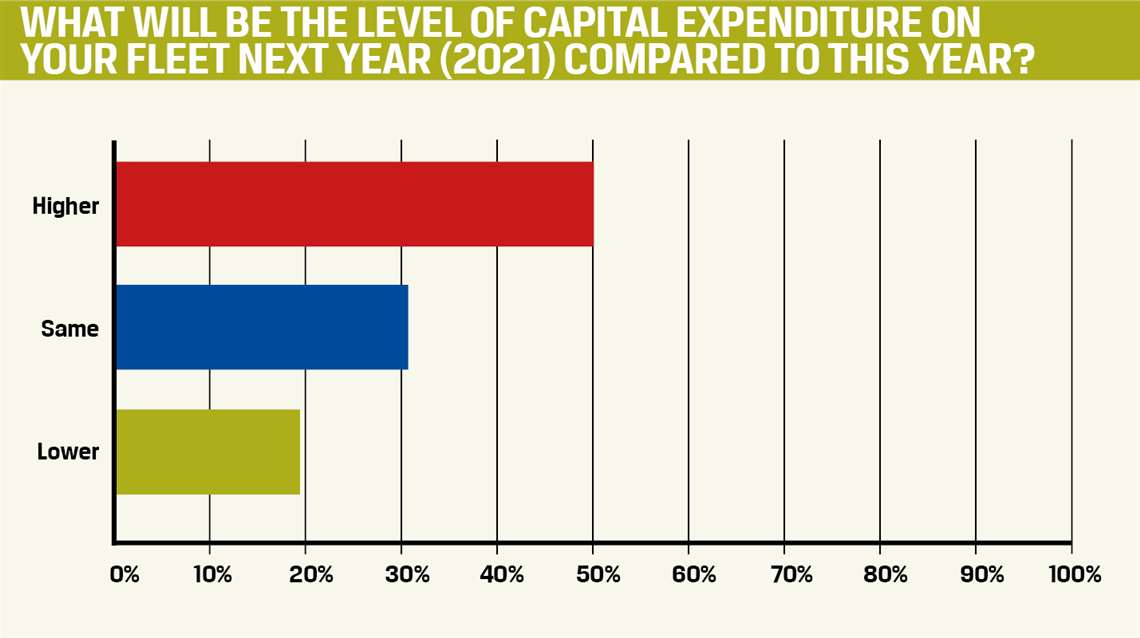 So there are the statistics and now it’s time for opinion. We encourage respondents to express their views on the state of the crane rental market and here is a snapshot of the more interesting comments. Some have been quite forthright. “In the United States without Trump the economy is headed for a disaster,” replied one US respondent. An opposing view from the USA stated, “Things are getting better and 2021 should be good.” Another US reader reports “an increase in infrastructure projects but a decrease in general construction”, while another, from Pennsylvania, acknowledges the impact of coronavirus, saying, “we lost three months of work in 2020 because the governor of Pennsylvania shutdown all construction projects when Covid-19 started.” The impact of coronavirus is also acknowledged by a UK reader who says that “the rates for mobile and crawler cranes are taking a massive plunge since the start of the Covid pandemic.” 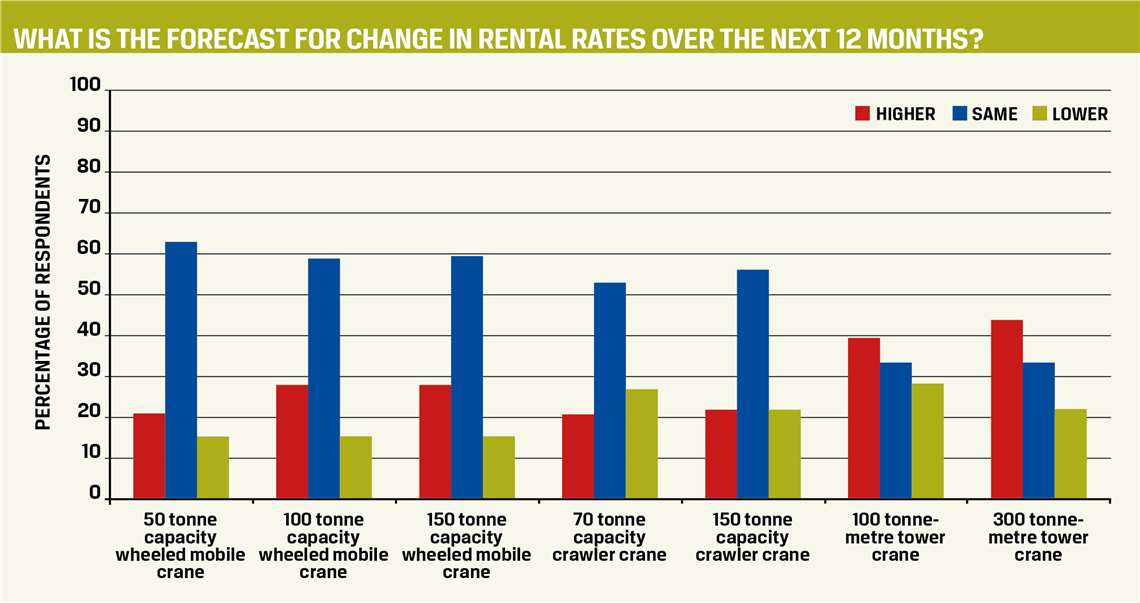 An Indian response states that crane rental rates are becoming “very competitive” and that “it will be difficult to survive”. A similar picture emerges from the United Arab Emirates where one respondent reports “rates are decreasing by the minute while expenses are increasing – there are a lot of payment issues.” Another UAE response says, rather poetically, “rates are dropping like rain on a stormy night.”

A response from Italy notes, “the crane rental market in north Italy is increasing although prices are still lower than rest of Europe and other rich countries.”

In Australia, one reader highlights, “Crane empty hook speeds are more critical than ever while the demand for electric powered cranes has increased. Requests for retrofit noise control on diesel cranes has also increased.”

A German tower crane rental firm notes, “there is still a lot of work but competition is growing and prices are lower.” In nearby Slovenia, Croatia and Austria, another response states, “the market is improving because of high-rise production level slowly returning to pre-2008 crisis level.” 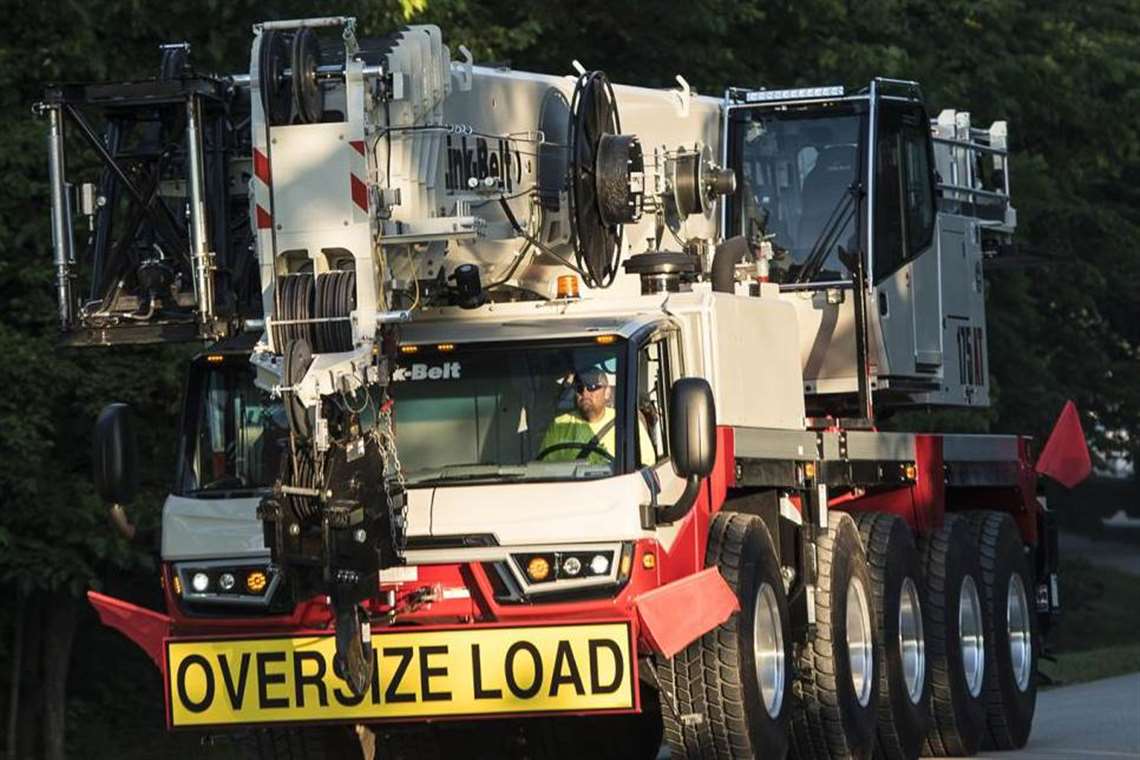 SC&RA stalwart Terry Young passes
Former SC&RA Chairman and President Terry Young was known for his professionalism, optimism and love of the construction industry. He wanted to make the industry safer.
Loading...