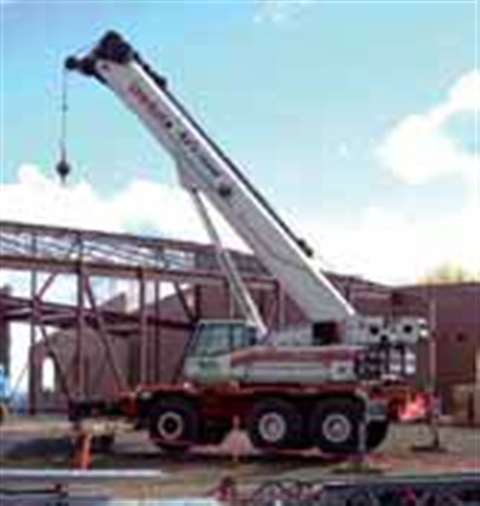 Talk to just about anyone in the crane rental business and they will tell you the market for construction cranes has not slowed over the last year. With a few exceptions, this is true across the country and for just about every type of application, with crane rental companies still scrambling to meet the needs of contractors.

“This crane cycle did not start until the third quarter of 2005 and I expect no slowdown for at least 18 months,” says Bill Fox, vice president and general manager of cranes and contract services at H & E Equipment based in Baton Rouge, LA, and one of the largest crane rental companies in the nation.

“From what we can tell, there hasn't been a slowdown,” says Joe Nelms, vice president of sales and marketing at Bigge Crane & Rigging of San Leandro, CA. “Typically, our inquiries are limited to the West Coast. For the last several months we have seen inquiries from across the country.”

In Detroit, Pat Henry, equipment manager at Laramie Crane, concurs: “Demand for large cranes has not dropped off at all.”

Steve Freckmann, general manager at Dawes Rigging and Crane based in Milwaukee, WI, says, “The demand has stayed fairly persistent throughout this calendar year. It seems that in the last month or two the demand has lessened in some categories, but that was relegated to mainly small rough terrain cranes and smaller- sized crawler cranes.”

Jim Robertson, managing partner at General Crane Services, Inc. of Pompano Beach, FL, says he is a bit concerned about the rental market, and his company has seen a slowdown in demand the second half of 2006. Although the demand is down, Robertson still says, “All types of cranes are in great demand.”

Cranes of all types and sizes are in demand with the market particularly strong for larger cranes. “[We're seeing] the greatest demand for all sizes and types of cranes, including tower cranes, since 1980,” says Fox at H & E.

“Large RTs from 65 ton to 130 ton have been the most frequently requested cranes,” says Freckmann. “In addition, there has been a great deal of interest in crawlers from 100 ton to 1,000 ton capacity.”

Henry at Laramie Crane says his company has also seen demand increase for larger cranes. “Crawler cranes of all sizes and rough terrain cranes 80 ton and larger are in great demand.”

“Based on the inquiries and where they are coming from, crawlers are in the highest demand,” says Nelms at Bigge.

Rental market demand continues to outstrip crane manufacturers' ability to provide product, and it appears that this is a situation that is not likely to remedy itself in the near future. “RTs, ATs, truck cranes and crawlers are all on allocation to dealers and end users for 2007 from all manufacturers,” says Fox. “We are taking orders for some sizes for 2008.”

Several markets are driving crane rental activity. “Energy projects are the first and biggest drivers of the crane market,” says Fox. “Transportation projects are second and the global market is third.”

Freckmann says his company is getting a lot of business from the energy sector, and agrees that it is the strongest rental market in the US. “Undoubtedly, anything having to do with energy is having the greatest impact on our rental fleet inventory,” he says. “Th e energy sector - coal, wind, bio-diesel and ethanol - by far is creating the greatest demand for rental cranes.”

Henry says, “Th e power plant work is starting to come back now, rebuilding from the hurricanes and wind power is taking many large cranes.”

“While all markets appear strong, power plant, petrochemical and wind seem to be the strongest,” says Nelms.

In the Pacific Northwest, Ken Day, vice president of marketing at Campbell Cranes and Ness Cranes, says the strongest crane rental markets are “commercial and high-rise construction; transportation, including roads and bridges; power plants and other types of industrial construction; and wind power.”

In Florida, Robertson says “commercial” work has been the strongest area for crane rental.

For the first time in several years, crane rental companies report that rental rates have risen exponentially as a result of strong demand and increased costs. Many factors go into rental rates, ranging from operating costs to the geographic area of the country.

“The increased demand from all sectors of the construction industry, along with the price increases from the manufacturers on all models of cranes, increased fuel costs, and labor costs have all contributed to our decision to raise our prices,” says Dawes' Freckmann.

“There has been a noticeable trend by most of our competitors to raise their prices as they incur the same rising cost factors that we have experienced over the past two years.”

Nelms at Bigge Crane says rates have increased on the West Coast. “We have been able to increase rates but I'm not sure that the increases are reflective of the higher replacement costs of both new and used cranes,” he says. Fox at H&E says that “in the last 18 months rental rates have increased about 30% across the board. All crane sizes and types.”

In Florida, however, Robertson believes rental rates have leveled out and he is concerned about future rates. “Rates have stabilized but I see some panic,” he says.

While rates have increased in the Pacific Northwest, Day says, “A tight market means less shopping/dickering on the part of customers.”

Henry explains that there are other factors in the market causing the customer to pay more. “Rates have increased some, but customers are having to bring in cranes from farther away because the demand is so great, causing increased cartage cost,” he says.

The health of the crane rental market has led to higher values for older cranes. Looking at the excellent used crane market, a crane rental company might be tempted to take advantage of the situation by selling its older cranes and replacing them with new ones. Opinion is divided as to whether this is a good idea.

“I am not sure what drives individual companies to sell their used equipment,” says Freckmann. “Crane manufacturers are forcing some prospective buyers into the used market that otherwise might not be there, due to the backlog for new equipment, long wait times, and high prices for new cranes. This, in turn, is placing some upward pressure on resale values of used equipment. This has presented an opportunity to shed some older cranes and update our fleet.”

Henry at Laramie Crane is not selling off his older cranes because of the difficulty in replacing them. “The problem is the demand is so great, crane manufacturers cannot produce new cranes fast enough to keep up,” he says. “If you order a new crane now, you will probably not get delivery on that machine until the third quarter of 2007.”

Day says his company hasn't sold its older cranes for the same reason, “Replacements are scarce or non-existent.”

Fox says H & E is not replacing older cranes, “If the cranes are in good rentable shape, your cost is less than a new one and your ROI is much better than new. All things being equal, you make more money.”

“Demand for tower cranes has not been that great here.”

Day views the tower crane market as a complimentary market to construction cranes. “We do a lot of tower crane erection and take down,” he says.

Tower cranes are in demand throughout the Northeast, East Coast, Florida, Gulf Coast and California. (See related tower crane article, page 21) “We've seen an increase in the amount of tower cranes being used in and around the West Coast,” says Nelms at Bigge. “The demand for tower cranes seems to be parallel to the demand for construction cranes, if not greater.”

In the Milwaukee area, Freckmann sees the use of tower cranes falling off in one application but at the same time increasing in another. “The increased industrial and commercial applications for tower cranes have helped off-set the downward trend in demand for towers for construction of residential high-rise condominiums,” he explains. “Even though there is a present downturn in residential construction, we have not experienced a drop off in demand for our rental cranes. I think the rental market has been somewhat insulated from the housing downturn due to the broad demand for cranes in all other sectors of the construction industry.”