Reynolds Transfer eclipes more than a century of heavy hauling

With 132 years of moving experience, Reynolds Transfer & Storage is one of the longest established businesses in Madison, WI. When it comes to moving and hauling, the company has seen it all. After all, it originated before automobiles had even scratched the surface and now has a fleet of some of the largest trailers in the world. 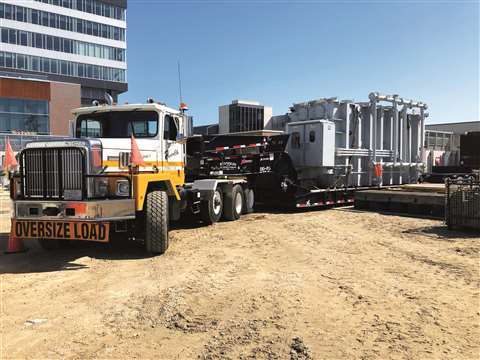 Founded by Anna Gault Reynolds in 1888, the business was originally a livery stable and hauling firm equipped with four rigs and 10 horses. It operated out of a barn next to Ms. Reynold’s house before eventually growing into a specialty hauling firm.

Today, Tom Reynolds has been serving as the company’s president for the past six years. He is part of the fifth generation of the family owned business, while members of the sixth generation also work for the company.

“A great deal has changed in the last century of our company, but our fundamental values have always been the same,” Reynolds said. “That is whatever the customer needs accomplished, we will help them with, in addition to giving back to our local Madison community.”

Reynolds is a leader in Wisconsin for hauling specialty items, performing heavy machinery moving, office and residential relocation as well as providing record and household goods storage and warehousing. In terms of volume, moving between machinery and housing is evenly split.

Currently, the company is at about 50 people, which swells during the summertime.

“We take a lot of pride in our people and put a great amount of trust in them,” Reynolds said. “Because every job is different, our movers have a lot of freedom to figure out the best way to handle a project. We are fortunate to have such a great crew.”

For more than 60 years, Reynolds also offered crane services as part of its business. The cranes portion of the business was split off into a separate company and ownership to shift focus to the core part of the company. The transition has not altered the way they run their business as they still can move large items with different equipment.

For large industrial equipment, Reynolds uses one of its three XL Specialized trailers, including an 85-ton XL Hydraulic Detachable Gooseneck (HDG) multi-axle 3+3+3, the largest trailer in the Reynolds fleet, along with two 55-ton trailers.

“The powered gooseneck extension is awesome, very smooth and safe,” said Reynolds. “We can take the Jeep off, flip the gooseneck to make it shorter, put a sturdy tractor under it and take the trailer and load into work sites other companies are unable to access with their trailers.”

For a hauling company, trailers are the lifeline and support of the products are crucial. For this, Reynolds works with Midwest Trailer Sales.

“For us, it is so important that XL provides not only a great product, but the follow up and support that happens before and after the sale,” said Reynolds. “Merle Wall and his team at Midwest Trailer Sales are a great representation of XL. They are so knowledgeable and understanding of our needs.” 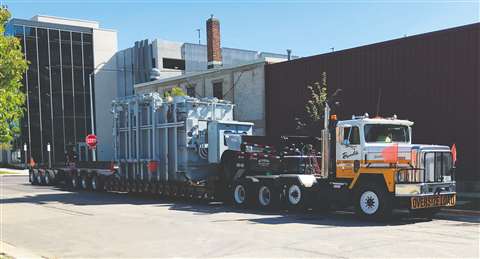 ”Fortunately, we were able to self-perform and keep a very tight and critical schedule for the customer.” -Tom Reynolds, President, Reynolds Transfer & Storage

The customer needed a replacement spare with its previous transformer failing. Reynolds drove to Fond du Lac, WI to pick up the replacement, hauling and installing the new equipment back in Madison, WI.

“We work with a lot of heavy industrial equipment, such as transformers, boilers and chillers,” Reynolds explained. “For this project, the access was incredibly tight at the destination when we moved the 165,000-pound transformer. Fortunately, we were able to self-perform and keep a very tight and critical schedule for the customer. Our 85-ton trailer did a great job.”

To be in this business and continue to thrive as the machinery moving company has, is not by coincidence or accident. Rather it is the family continuously pushing forward and staying with the times. And in some cases, ahead of its time.

This includes sustainability, an initiative started by Ben Reynolds, Tom’s son. In the last five years, Reynolds has committed to sustainability with several projects aimed at reducing its overall environmental impact. For instance, three of the company’s buildings run primarily on solar electricity.

They could have stopped there. Instead, Reynolds also updated its truck fleet. The trucks now feature a clean idle and lower emissions profile. While it is a big investment, the company thinks it has made a sizable difference.

Whether it is with horse and carriage or trucks and trailers, Reynolds Transfer & Storage has always found a way to get the job done safely, on time and on budget. If the past is any indication, the foundation remains strong for years to come in preparing the sixth generation of Reynolds for the future.